The exhibition of Mowry Baden’s immersive, large-scale sculpture, Dromedary Mezzanine, represents the first showing of this artwork in the western United States. One of Canada's most accomplished artists and one of Pomona College's most distinguished alumni, Baden has been creating kinesthetic sculptures and public artworks for four decades.

Because they require the viewer’s bodily participation, Baden’s interactive works demonstrate his interest in a physical and perceptual exchange between the viewer and the work of art. In the late 1960s and early 1970s, Baden explored his own body’s internal perception of movement, giving priority to physical experience over vision. He then began to explore means of extending this kind of experience to others. Physical interaction, he discovered, generated levels of awareness that contrasted distinctly, and often unexpectedly, with the visual experience of object and environment.

“In this sculpture I am trying to bring two kinds of awareness together that are ordinarily mutually exclusive. One is speculative in the sense of ruminating, pondering or sorting. Browsing in a bookstore would be one example. Recalling a dream would be another. The other kind of awareness is more phenomenological. It happens when we are exerting ourselves.  It’s the trance-like state long distance swimmers or runners experience, or the kind of concentration a boater experiences whose outboard won’t start and who continues to pull the starter cord again and again.

The sculpture consists of a tall vehicle that is powered by my own exertion, and four wall mounted chambers (toy tents) that I can visit and examine with the help of the vehicle. The platform of the vehicle raises me three feet off the floor, high enough to get an unimpeded view of objects in the tents. When I propel the vehicle over to each tent, I can see the objects clearly.  However, moving the vehicle from tent to tent takes quite awhile and requires considerable exertion.”

Baden (b. 1936, Los Angeles) graduated from Pomona College in 1958, and returned ten years later to take on the roles of professor of art, department chair, and gallery director. During his three years teaching at Pomona, and his subsequent decades of teaching in Canada, he has had a strong impact on his students. His body-oriented works of the late 1960s and early 1970s and his broader interest in the perceptual and interactive possibilities of art influenced generations of students, including Kim Adams, Lewis Baltz, Michael Brewster, Chris Burden, Jessica Stockholder, and Peter Shelton. Baden’s works that invite viewers to physically operate the sculpture have always involved a more collaborative approach to viewers that prefigures much contemporary work today. 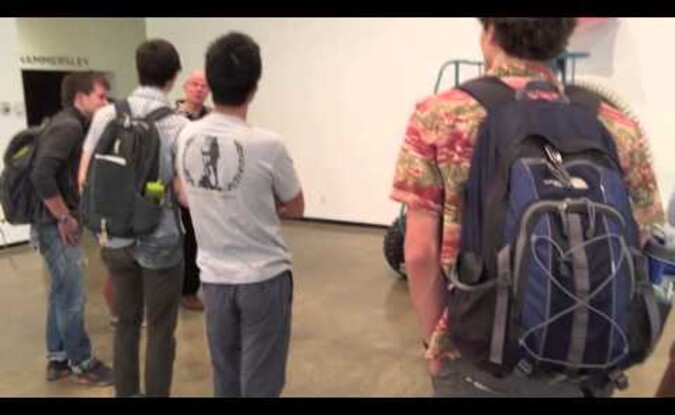