The Intimacy of Story 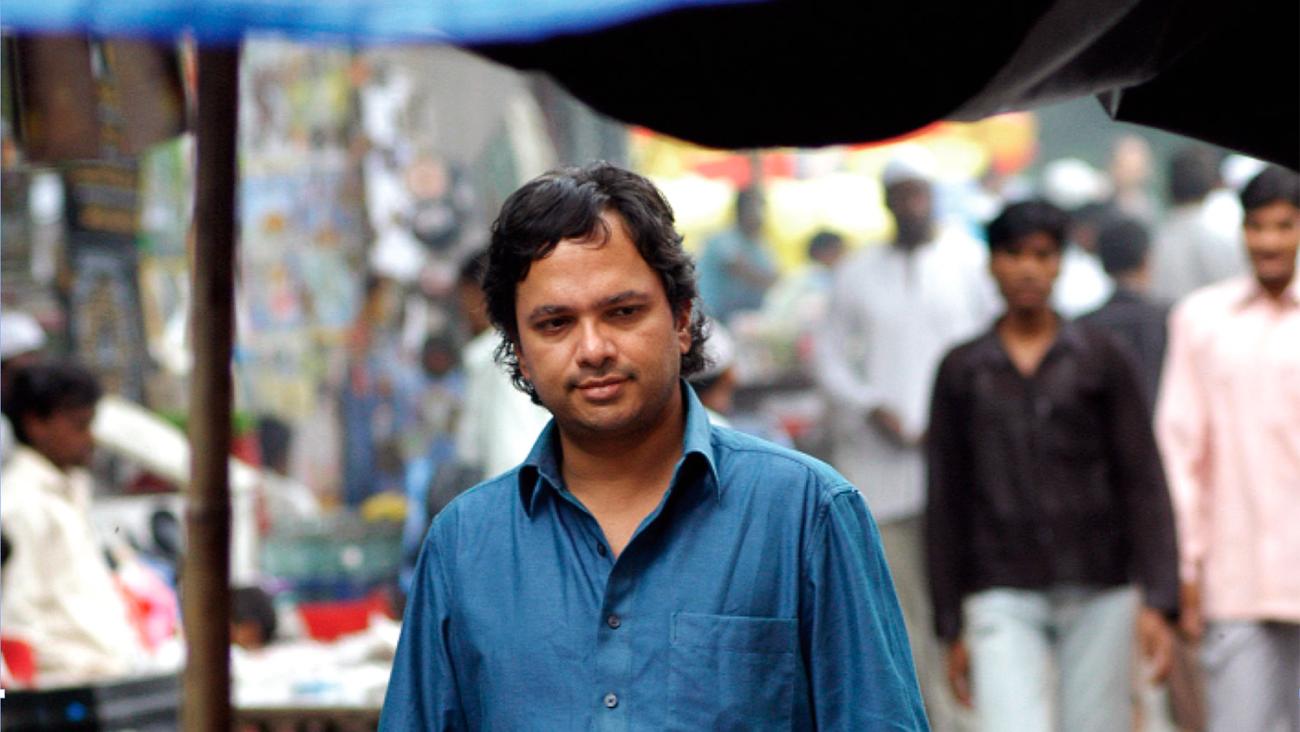 Vikram Chandra’s books are labeled as “literary fiction.” But he isn’t quite sure what to make of that term.

“The distinction between literary fiction and everything else has never made much sense to me,” he says. “Some of what’s labeled literary fiction seems as formulaic and predictable as the fiction that is dismissed as genre.”

That mood of gentle melancholy.

“Not that I’m knocking convention, mind you. But it seems to me that people who criticize the conventionality of others are often dazzlingly unaware of their own rigorous adherence to certain formal structures, their religious devotion to certain ideas about ‘Literature.’”

“A white Pomeranian named Fluffy flew out of a fifth-floor window in Panna, which was a brand-new building with the painter’s scaffolding still around it. Fluffy screamed in her little lap-dog voice all the way down, like a little white kettle losing steam, bounced off the bonnet of a Cielo, and skidded to a halt near the rank of schoolgirls waiting for the St Mary’s Convent bus. There was remarkably little blood, but the sight of Fluffy’s brains did send the conventeers into hysterics, and meanwhile, above, the man who had swung Fluffy around his head by one leg, who had slung Fluffy into the void, one Mr Mahesh Pandey of Mirage Textiles, that man was leaning on his windowsill and laughing. Mrs Kamala Pandey, who in talking to Fluffy always spoke of herself as ‘Mummy,’ now staggered and ran to her kitchen and plucked from the magnetic holder a knife nine inches long and two wide. When Sartaj and Katekar broke open the door to apartment 502, Mrs Pandey was standing in front of the bedroom door, looking intensely at a dense circle of two-inch-long wounds in the wood, about chest-high. As Sartaj watched, she sighed, raised her hand and stabbed the door again. She had to struggle with both hands on the handle to get the knife out.

“She turned to them, the knife still in a double-handed grip, held high. She had a pale, tear-stained face and tiny bare feet under her white nightie. ...”

Chandra’s own literary fiction, Red Earth and Pouring Rain, Love and Longing in Bombay, and his latest, Sacred Games, have garnered outstanding critical acclaim—in part because they transcend what conventionally stocks the shelves of your local big-name bookstore. Consider Sacred Games, an ambitious, multilayered book about India’s underbelly of organized crime. His $1 million advance generated buzz, given that the tome clocks in at 900 odd pages and contains a sizeable glossary to decipher the motley-lingual English spoken in the book and on the subcontinent.

But the flurry of publicity and the big-money payout didn’t alter much more than Chandra’s bank account. He says it’s still about the writing.

“Finally, when you’re sitting there facing the blank page or empty screen, it’s still the same deal. I don’t think that ever goes away. It’s easier in the sense that you don’t have the same anxiety if you’ve never been published before,” he said. “Every time you write a sentence you’re still faced with the difficult task of making it a good one.”

Chandra teaches fiction workshops at UC Berkeley and lectures on the modern short story once a year. But inevitably that becomes a writing workshop, too—a teaching tip he picked up at Pomona in Martha Andresen’s Shakespeare class. Andresen had groups perform scenes from the plays they studied, making it one of the best classes Chandra ever took. Likewise, writing is best appreciated when readers give it a go, he said.

“My argument is that it’s instructive to the students to try and do it themselves. You get some notions of the problems that writers face—all the things you take for granted.”

Likening writing to training for a marathon, Chandra advises writers to pace themselves and be consistent. “If you try to go too fast on Monday, the next day you have nothing,” he says.

A room with a view is nice but optional.

“I’ve written on trains, in hotels, planes—I’m pretty flexible in that way,” he said. His flexibility is due partly to necessity, given that he travels quite a bit and splits the year between Mumbai and the States. “If I was waiting to get home I wouldn’t get anything done.”

Revisiting his drafts may very well be the best part of the entire process. He likens it to editing film.

“It’s really in the revision that you make the art. When you’re editing that’s when it really starts to be fun and you can see the shape of the whole thing coming together,” he says.

While he won’t disclose what books he likes (it gets him in trouble, he says), his advice is to write what you love. It’s that love for a good story that started it all for him.

Some of Chandra’s earliest memories are of his mother, a playwright and screenwriter in India, sitting at their dining room table, writing on long sheets of paper.

While there were always books in the house, books were also very expensive and often hard to find, as some towns didn’t have bookstores. When arriving at a bookstore, Chandra said he’d find an odd mixture of thrillers and self-help books. But when he did come across a promising title it didn’t end there.

“I used to stand in the shop doing a cost-benefit analysis: number of pages versus how interesting a book looked,” he says.

As a reader of fiction there are certain pleasures he craves. He knows something’s working if there’s “a forward momentum in the plot that keeps me turning the pages; complex characters who stay with me when I put the book down; a vivid sense of place; irony and humor and pathos; intellectual and moral questions that I can’t answer easily; a wholeness of vision that lets me live inside the waking dream of the story, so that when I stop reading the world itself seems unreal.”

The story and characters should stay with you, prick at you and create a sort of waking dream. Knowing what he loves to read instructs Chandra regarding how to write.

“I do like thinking about form, about the patterns we extract from life and use to construct narrative, which in turn constructs our experience of the world; in my work I like to deploy these received forms and twist and pervert them.”

For Chandra story isn’t something that happens between pen and page; story comes alive in the mysterious exchange between the author and reader. Even in a world that moves at broadband speed and is saturated with reality, pseudo-reality and hyper-reality, he is sure the written word is here to stay.

Chandra thinks of the modern novel as a technological artifact—an object that grew from advances in printing and the democratization of literacy. Before it became fashionable it was more akin to pulp.

“For most of history, the novel or long prose story was a peripheral, low form, fit only for telling tales about tricksters and mountebanks and commoners and other unsavory types,” he says.

He admits that the novel may not occupy an exalted place in the future, but it will still be around. A self-confessed computer geek—he toys with new technologies and new media—he is adamant when he says: “I’ve not found anything that gives me the pleasure of reading.”

Onetta Brooks '74, past president of the Alumni Association Board
END_OF_DOCUMENT_TOKEN_TO_BE_REPLACED
© 2020 Pomona College