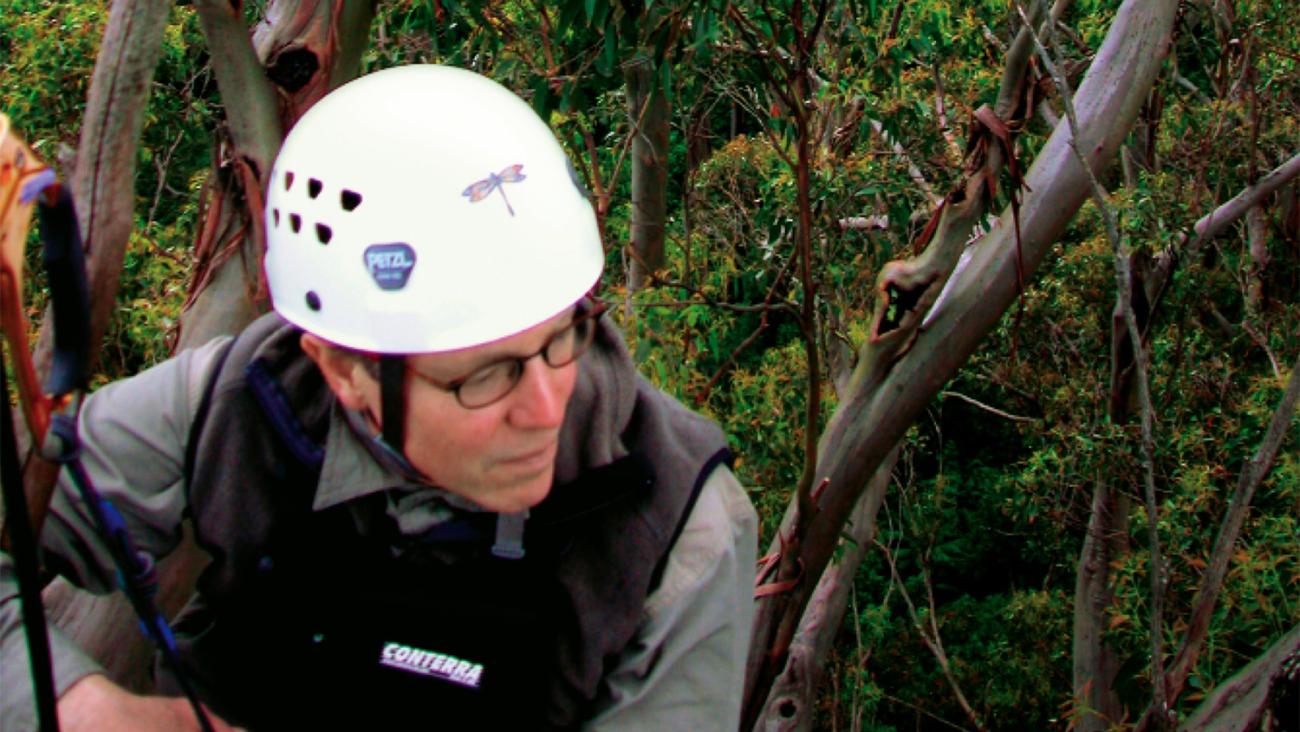 Look ﻿up into the trees on Richard Preston’s Freestone Farm, near Princeton, N.J., and you’ll see there’s been some serious pruning going on. Preston needed no tree service to do the cutting. He did it himself.

“I’m a competent, skilled climber,” he says, though he adds that when he’s suspended from ropes and twirling a buzzing chainsaw, “my wife won’t look.”

Preston ’76 learned to climb recreationally in an Atlanta school, and heard whispers about an almost mythical man who climbed giant trees in California. After repeated attempts to induce the secretive, reticent Steve Sillett to give him access, Preston still had to convince Sillett and his Northern California colleagues he was good enough to climb with them into the canopy of California’s giant coast redwoods, Sequoia sempervirens, which can grow to 370 feet. The climbers had no intention of allowing him to ascend with them. “I wasn’t in their league” as a climber, Preston admits, and nor did he understand the specialized technique they employed.

Preston persisted, and the result was his most recent book, The Wild Trees, published in April. He follows the small, dedicated band of botanists and arborists—and one unlikely acrophobic who obsessively tracks the tallest redwoods, but won’t climb them—as they map, examine, practically live in or near the declining population of the planet’s tallest trees. Once he established contact with his subjects, the real work began. In determinedly following his project’s progress from idea to completion, Preston showed why he is a titan of creative nonfiction writing today.

The author of seven books (two are fiction) and more than a dozen articles for The New Yorker, Preston gets inside his subjects’ heads, and their lives. His writing is as much about curiosity and effort as it is about laying out the story, and he has a technique he adheres to: reporting, researching, writing, rewriting. He is careful with every step. “It’s journalism,” he says.

“... Sillett understood what he was seeing. It was full, three-dimensional movement of the human body through tree space, movement across and through the high canopy—pure magic in the canopy, and it took his breath away. He watched how the climbers balanced their bodies as they moved along branches, how they walked along thin branches that should have broken under their weight but didn’t, because the climbers were suspended on ropes attached to anchor points above them. He saw how they pivoted and swung in the air. He began to ache to learn how to skywalk. The canopy scientists who had been climbing trees with ropes had just gone straight up and down the rope. They had known nothing about skywalking. They hadn’t been able to actually move through a tree. The grunts were showing him a secret door that led upward into the unexplored forests above the earth.”

—From The Wild Trees

The best-selling author isn’t certain where his ideas germinate. “You’re constantly looking for new ideas,’’ he says. “They bubble up in your unconscious from things that interest you. Then you can decide to pursue them.” Curious and intelligent, he tries “to find subjects who are completely off the radar screen, but who are doing interesting things, and write about them.”

Once an idea registers, Preston zeroes in on his key sources, filling dozens of notebooks with the things they say and do, descriptions and observations. He calls what he does “experiential (or immersion) reporting.” He participates in the stories he writes, so he understands the subject and relates to the people who are at their core. “I try to dig deep into their experiential reality,” he says. “That means when someone is in the redwoods, I have to learn to climb redwoods.”

For The Wild Trees, he waited until the climbers were away from their home one day, then carefully mapped out the gear they used to reach the heights. He returned to New Jersey, and had similar equipment fabricated for himself, then taught himself to climb as they did, practicing in the trees on his own property.

To research his best-known book, The Hot Zone: A Terrifying True Story (1994), which tells how a strain of the Ebola virus came to the U.S., Preston gained access to a Level 4 “hot lab” at the United States Army Medical Research Institute of Infectious Diseases at Fort Detrick, Maryland. There he donned a biohazard “space suit” and actually handled tubes of “hot agents” that were known to be fatal if there were contact with the skin or respiration.

As Preston hovered above the deadly virus, his space suit zipper split. With air rushing out from the pressurized suit, Preston asked his guide, “Hey, do I have a problem here?” The epidemiologist quickly clamped shut the suit by hand and hustled him out of the hot lab. There was no contamination, because of the out-rushing air, but it was a near thing.

That’s getting close to your work, and it reflects Preston’s desire to know his subjects’ lives or work microscopically. Later, he would describe in ominous detail what happened when Col. Nancy Jaax experienced a breached suit. The Hot Zone launched Preston on a galvanizing three-book journey that he calls his “dark biology series” of best sellers. The Demon in the Freezer (2002) examines smallpox and anthrax, and his novel The Cobra Event (1997) follows a forensic pathologist’s investigation of a suspected bioterrorist plot.

For his creative nonfiction, Preston reconstructs vivid scenes, allows the subjects to speak to each other through recreated dialogue, foreshadows important events and relates memorable anecdotes. And he supports it all with solid, verifiable, even pitiless reporting. Along with copious notes, he also took hundreds of digital pictures as he scaled the redwoods in California and giant eucalyptus trees in Australia’s Hume Plateau with Sillett, Marie Antoine and others. He used these photos to help construct and describe scenes, as when he noted the “indescribable, profound” expression on Antoine’s face, as her husband, Sillett, climbed out of her sight in a risky tree. “You can see her emotions right there,” Preston says.

Preston’s writing process is just as rigorous as his reporting. “I begin drafting my book,” he says, “and the early drafts stink. But gradually, through many rewrites, I structure a book, hash it out.”

The author says his readers deserve stories that are meticulously, even obsessively, fact-checked. “I call my subjects back,” he says, “checking and rechecking scenes and trying to bring in intimate details. Nonfiction writing features interior monologues.” He spends “days, weeks,” on the telephone during this phase. How does Preston recreate the things people thought? “I ask them what they were thinking,” he says. “In a moment of high drama or tension or fear, people will remember.”

Preston then takes that material and “really deepen(s) the narrative, until it reads like a novel, though it’s nonfiction.” Then, he turns his work over to a fact-checker, who re-interviews everyone. This, he says, “makes the book cleaner; it’s the due diligence.”

Even when Preston finishes his final draft, there’s plenty of work left to do. He gives it to his book editor, Sharon DeLano, who goes over it with a fine-tooth comb, doing both line-editing and structural editing. “She’ll tell me to reorder whole sections or paragraphs, and she’ll change a comma.” Eventually, from the jalopy Preston describes as his starting point, a fine-tuned mechanism emerges. “I want to deliver the readers a Ferrari,” he says.

When she heard that Preston disparaged his drafts, his editor at The New Yorker, Amy Davidson, wrote, “I certainly wouldn’t describe his drafts as jalopies. Richard is a pleasure to edit. He is able to evoke entire unknown worlds—the redwood canopy, the workings of a virus, or even the mental landscape of great mathematicians—in a way that almost no other writer can. Part of that is the reporting work that he puts into every story, but other writers wouldn’t be able to do what he does even if they were handed the same notebooks.”

Preston works in a white 18th-century farmhouse on his property, only about 30 yards from the house he and his wife Michelle built. The farmhouse acts as a guesthouse, office and also, in a small downstairs room with a view of the fields, a storage area for his climbing gear. Several trees around his farm have permanent climbing ropes descending from their tops.

Sitting in a teak Adirondack chair and watching rain clouds building to the south and west, Preston receives a call from Davidson at The New Yorker. She says his next piece for the magazine, “An Error in the Code,” about a rare genetic disease that compels people to cannibalize their own bodies, will run the following week. An expanded and retitled version of that article is set to appear in his next book, tentatively titled Blood Kiss, arriving in 2008.

The Wild Trees may have sidelined him for a time. But Preston’s interest in dark biology is, apparently, incurable.