A Conversation with Nature 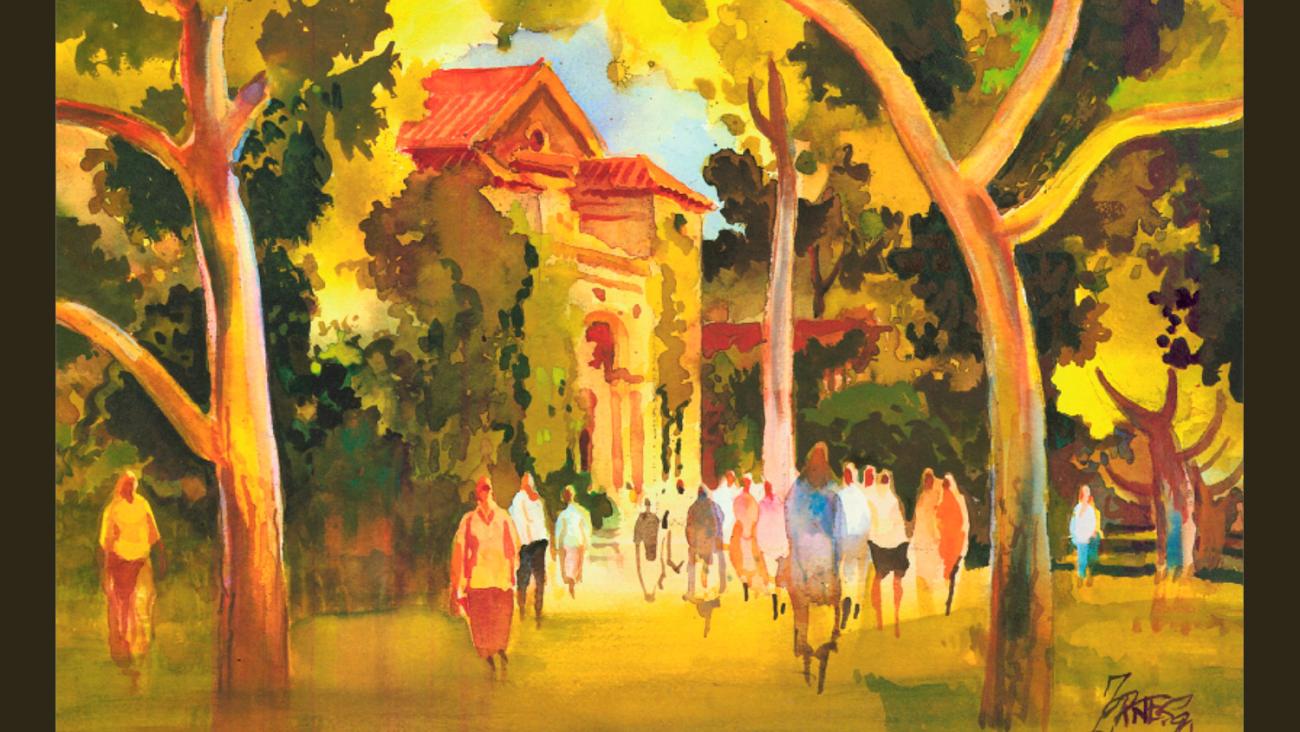 Milford Zornes ’34 is the last living icon of the California School of watercolor that rose to national prominence early in the last century. His work has graced the walls of the White House, the Smithsonian and New York’s Metropolitan Museum of Art. In his countless landscape paintings, Zornes has brought his fluid sensibility to scenes ranging from misty seashores to jagged mountains.

So it is more than a little surprising to hear Zornes wishing he had focused on nature even more intently. “Why didn’t I take better note of a tree branch, so I could have the basic truth of it?” he asks in an interview shortly before he turned 100 years old Jan. 25.

It’s his age, not lack of observation, that poses challenges for the artist today. Twenty years of macular degeneration have forced Zornes to rely on memories and sketchbooks. He fears the day when blurred vision forces him to set down his brush.

For now, however, Zornes still makes it a goal to paint every day, and his thoughts about what it means to be an artist remain as sharp as his sketching pencil.

Scratching lines on a page and saying it’s a tree isn’t enough, he says. The artist must have a particular sensitivity to the tree. “You have to look at it and take note of its character. You have to feel the strength and weight of it, the density and foliage of it,” he says.

When he talks to aspiring painters Zornes is practical:

Make up your mind about what exactly you’re doing. Don’t expect everyone to buy your pictures. Get all the training you can get. Compare your work with the work of other good painters and learn from them. Strike hard to reach your objective.

“If you do it honestly, for yourself, you’ll have an audience,” Zornes says. “Maybe not a big audience. You might not get rich. But you might do very well as an ordinary, good craftsman.”

It was in his youth on the Oklahoma prairie that Zornes first learned to draw, taught by his mother who hoped to keep her young son occupied and out of trouble. Zornes’s decision to make art his livelihood came after some vagabonding years. There was freelance writing for Popular Mechanics and Scientific American and a short stint studying engineering in San Francisco. After that, Zornes hitchhiked across the country and worked on the docks in New York City before getting on a freighter to travel across Europe. But he was always drawing.

Upon returning to Southern California, where his family had settled in his teen years, Zornes made his career choice. When he came to Pomona College in 1930, he was set on studying with Millard Sheets, who, while only in his 20s, had already made a name for himself as a watercolor painter. When told he couldn’t study with Sheets because the artist was based at Scripps College, Zornes and his friend, the late Tom Craig ’34, pressed the issue and won the day. Zornes counts Sheets, the Pomona College campus and Claremont’s beauty among his influences.

Zornes quickly carved out his own growing reputation within the burgeoning California art scene. Highlights of his 80-year career include serving as president of the California Water Color Society and having his painting, “Old Adobe,” selected by President Franklin and Eleanor Roosevelt to hang in the White House. “Arizona Evening” is in the permanent collection of the Metropolitan Museum of Art, and other examples of his work can be found in the collections of the Library of Congress, the Smithsonian, the Butler Institute of American Art and the Los Angeles County Museum of Art.

Gene Crain ’55, who owns more than 1,000 works of art in the California Style, counts more than 40 of Zornes’ paintings among his collection. Crain points out that California was less than 60 years old when Zornes was born and that, of all the California Style painters, Zornes is the only one left. “He uses his genius to chronicle his world,” says Crain.

But Zornes doesn’t trumpet talent, which, he believes, can tempt one to be clever. “I classify talent along with money, muscles or good looks,” he says. “Talent could be a deterrent to creativity.”

What he does praise is discipline.

“I’ve had to work hard for my advantage … you need enough talent to have an interest. Eighty percent is sheer hard work. A good painter has no more mental capacity than the next guy—it’s how you spend your time and what you learn to do.”

It goes beyond the discipline of craft. It’s also a discipline of thought and a decision as to whether the artist’s objective is to record emotions or observations. Taken together, the process yields discovery, he says.

An example: Zornes and Patricia, his wife of 65 years, still live in Claremont, shadowed by the San Gabriel Mountains. To make a painting of those mountains, he says, you might talk to a geologist to get the physical facts about them. “Then there are your daily experiences” with the mountain range. “One morning there are clouds; another morning it’s covered with snow.”

But artists see something more, and they must cultivate that way of seeing in order to do their job well, he says. “Art is the presentation of truth beyond fact and reason. What about all those wonderful poetic happenings—like weather—adding to the impression we get when looking to the mountain? As a painter, you have to translate that into actual form on a canvas.”

With age, says Zornes, comes the need to work even harder and the need to accept his limitations. With his pacemaker, hearing aid and cane, he jokingly refers to himself as “Bionic Man.” The frustration of his failing sight has tempted him to quit. “I’m having trouble having the courage to work from scratch because I can’t see to do it the way I want to do it.”

Another kind of courage is necessary too—to be gracious with himself.

Of the three graphic fundamentals of his art—line, form and color—it is line that is the most elusive to him now, Zornes says. His colors are bolder (he uses more reds and yellows) and he has to trust instinct, muscle memory and a storehouse of scenes from his imagination.

“I’ve painted so long I almost know what the brush is doing whether I can see it or not.”

His comfort is this: All art is abstraction to some degree. “It isn’t possible to copy nature. You simply have to learn from nature. You can see what nature has designed and follow some of the precepts, but you can’t copy nature.”

Zornes describes art as storytelling, a mandate to take what nature has given him and try to set it down for others. “That’s what you do as a painter: You remind people to look at the very world they’ve seen all their lives—but they’ve not seen.”

But he has little tolerance for “self-expression.” To his way of thinking, it’s a cheap item.

“I despise that ‘express yourself’ thing. It bores the hell out of me,” he says. He dismisses a great deal of what passes for painting; it’s in a language he doesn’t understand. “For me the end goal is something that’s said about something else.”

At the same time, Zornes concedes that what he paints is his unique expression of what he sees—each person’s way of seeing is different from another’s, he says. But he is sure of this: Nature has the first and last word. Whether it’s the ocean or a tree, the artist is only translating that phenomenon.

Translation requires a certain restraint. A student once claimed not only to be the best painter in Zornes’s class, but also to include everything in his pictures. “I thought, ‘Oh man, you’ve made your first mistake!’ That’s like learning to speak another language by consulting a dictionary.”

Zornes still applies that same sort of scrutiny to his own work. Age is a great inconvenience, but it forces him to sit, think and let his imagination foment.

“I’d rather become self-critical than become a garrulous old man,” he says. “I better be spending my time—my last effort or two—seeing what I can do as a painter … You don’t give up. You just go on with it.”