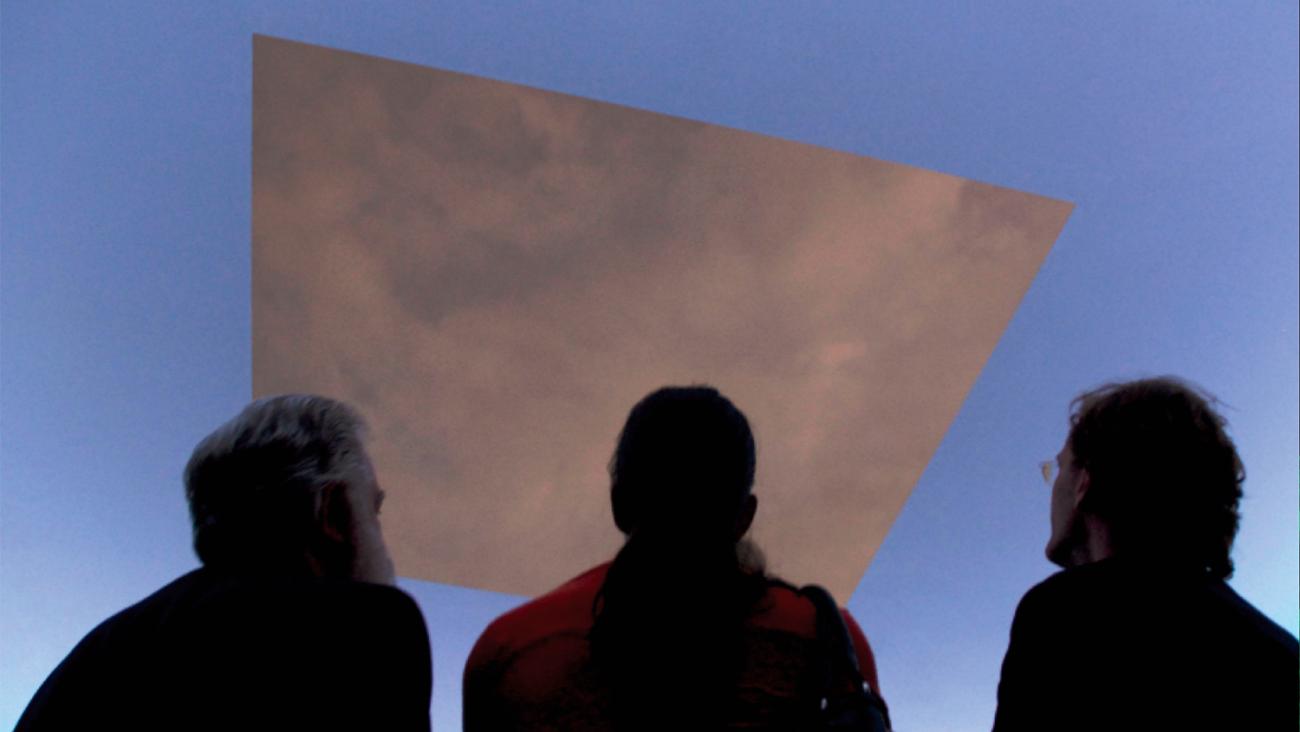 On crisp winter evenings, while the sun is going down, visitors from near and far gather on benches beneath a metal canopy that frames celebrated artist James Turrell ’65’s new window to the sky. As the natural light begins to dim, LED lights bathe the canopy in changing colors, from goldenrod to turquoise. And as the lighting changes, so does the viewer’s perception of that framed sheet of sky. One moment it’s a dreamy lavender, another it’s an ominous tablet of black that seems to hover above on its own accord.

Known as a Skyspace, this latest in Turrell’s series of light-and-space shrines attracts everyone from kissy young couples to sweater-encased seniors to kid-shushing parents and their frolicking offspring. Weekend evenings typically draw more than 30 people to the Skyspace, which serves as the centerpiece for Draper Courtyard of the new Lincoln and Edmunds buildings.

“Every time I’ve come it’s been almost full,” said Sharon Hightower, a Claremont woman who recently brought a dinner party of six to the Skyspace as a pre-meal surprise. The boisterous bunch, equipped with a Thermos of apple cider, wasn’t disappointed. “It’s a great experience,” said Janet Preston, one of her guests.

Many visitors come from Los Angeles and environs after hearing about the Skyspace in the media or through word of mouth. Those from out of state or overseas often are introduced to the Skyspace by family and friends who live in Claremont and are eager to show off the new art installation.

Local residents Subodh and DeEttra Mulay took in the experience with their bundled four-week-old daughter, Maya, and their chow-cocker spaniel mix, Taylor. If the reactions from the infant and the pooch were muted, the couple’s weren’t: “It was just so subtle and beautiful,” said DeEttra.

“Look at that blue.”

“Oh, look at that periwinkle color. Isn’t that beautiful?”

As the adults talk colors and light, a young boy interjects: “Oh, there’s an airplane!”

Kathleen Howe, director of the Pomona College Museum of Art, has noticed how separate groups of visitors—“distinct little pods of students, community people, staff, faculty, art junkies”—start talking with each other 15 to 20 minutes into the program.

“There’s something magical about being given permission and encouraged to just sit back and watch the sky for a while,” says Howe. “It seems to foster that kind of exchange that happens when you’re a kid lying on your back on a friend’s lawn.”

Then again, Howe adds that on other evenings, “it’s been a more boisterous crowd who applaud when the intense color changes happen at the end of the program.”

Repeat visitors may discover that just as interesting as watching the sky is the act of watching other people watch the sky.    Peter Kass ’09 likes to study in a lounge next to the Skyspace, where he can still view the light show through the windows. He also has made quite a study of Skyspace visitors, noting that “it seems people from all walks of life are interested in this thing.

“The best part is the way some people watch it,” he said. “They look in awe, as if they’re watching a meteor shower or some once-in-lifetime opportunity. I don’t know what it is about the Skyspace, but people are amazed by it.”

So what is it about the Skyspace? Kerry Farmer, who considers Turrell “the most amazing artist working” today, has no trouble answering. “When you look at this, you’re not thinking about work, politics, the state of the world,’’ said Farmer, production manager for an L.A. theatre company. “It just kind of all goes away for a while.

“And it’s very optimistic … With everything else going on, there’s this kind of beauty. And it’s right over your head all the time. You just need someone like James Turrell to help you focus.”

Farmer’s thoughts on the Skyspace were affirmed on his second visit, when he brought along his mother, Lola Mydin of Whittier, who gushed: “It’s like magic.”

Onetta Brooks '74, past president of the Alumni Association Board
END_OF_DOCUMENT_TOKEN_TO_BE_REPLACED
© 2020 Pomona College