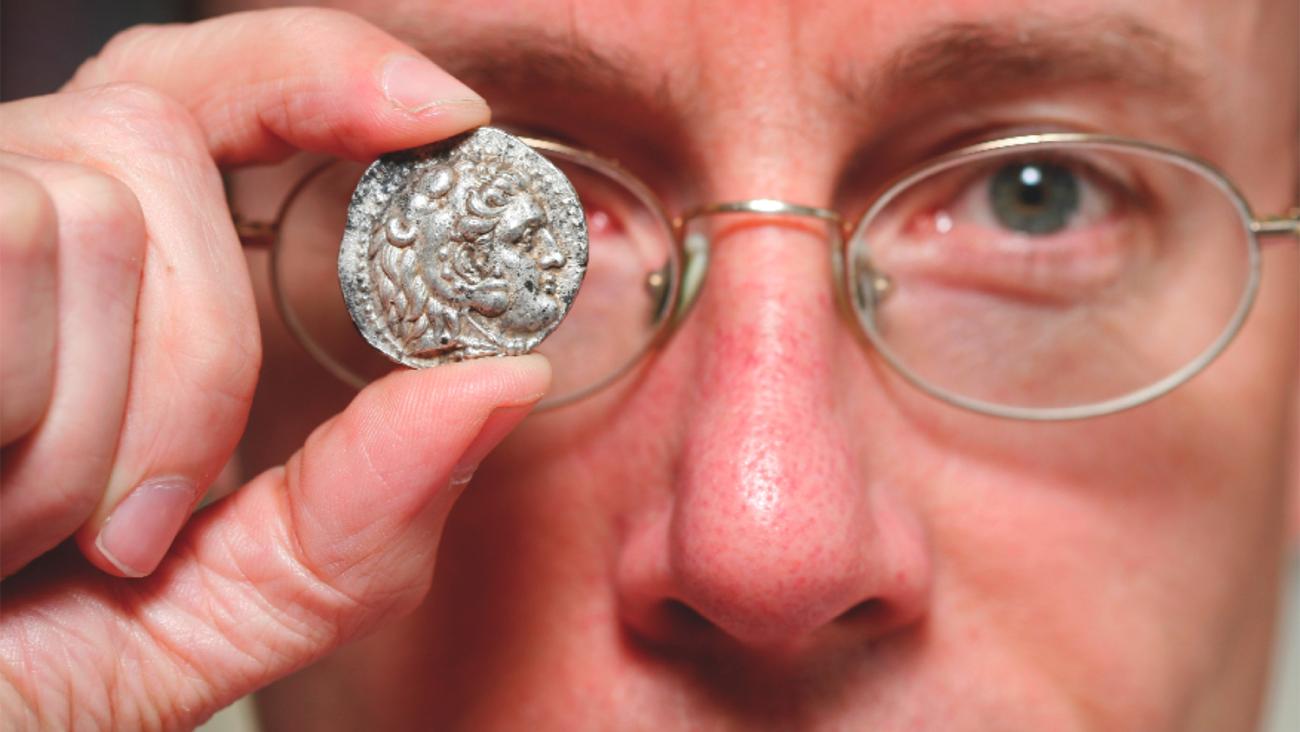 As one of the world’s top dealers in ancient coins, Eric McFadden ’77 holds history in his hands on a daily basis.

He doesn’t need gloves, though you’d think 2,000-year-old coins would be examined in near-laboratory conditions. “It sounds counterintuitive,” explains McFadden, but it’s only the modern coins that must be placed on a velvet tray because their surface sheen—“mint luster,” as numismatists call it—picks up fingerprints.

﻿He does need a sharp eye, though—to spot any forgeries. Ancient coins can fetch as much as $1 million each, and classical numismatists like McFadden authenticate them for commercial purposes. Not surprisingly, theirs is a highly specialized global profession, catering to a population of enthusiasts that dates back to the humanists of Renaissance Italy. In recent years, as the trading of coins has moved increasingly to the Internet, the number of coin aficionados has grown dramatically.

From his office on Old Bond Street in the heart of London’s fashionable Mayfair district, McFadden maintains his boyhood fascination with these age-old symbols of art, commerce, religion and politics. Classical Numismatic Group (CNG), the company he co-founded with a friend who runs its headquarters in Pennsylvania, is widely respected and is one of the world’s largest firms specializing in ancient coins.

McFadden travels to auctions around the globe, carefully examining the intricate details of coins he might be purchasing or selling on behalf of a customer. (He’s mainly responsible for his company’s purchasing operations; selling is handled by the Pennsylvania branch.)

“When I first look at a coin, all sorts of thoughts run through my head about the historical background and artistic significance,” McFadden says, adding: “But I’m always thinking: is it authentic, how much is it worth and what is the best method to sell it.”

It seems odd that someone who grew up in future-focused California—and in Los Angeles’s San Fernando Valley at that—has an affinity for ancient coins. McFadden was just five when he started collecting coins at his home in Northridge—along with stamps, rocks and “most of the things children collect for fun,” as he puts it.

McFadden started with U.S. coins and then noticed that a few dealers had ancient coins, about which he knew nothing. “I bought a book on Roman coins and did a little reading,” he recalls. “Then I took the plunge and bought my first Roman coins, two silver denarii of the Roman Empire, $32 for the pair.” After conducting as much research as he could to find out everything about the coins, he concluded that “their history was just incredible.” In short, says McFadden, “I was hooked.”

Long before the invention of the printing press, coins served as instruments of mass communication as they traveled from hand to hand during trade. They were not simply money but were designed to express community pride or carry a political message. The Greek city-states, for example, often produced beautiful, artistic coins that embodied the culture of the city. The Romans, masters of the practical, exploited the propaganda value of coins, designing them in ways that referred to the exploits of their ancestors.

To put the power of ancient coins into context, “imagine if today there were no newspapers or magazines or the Internet or television, but the president regularly issued new coin designs to communicate his achievements or political platform, and at the same time the president’s rivals also issued their own coins, and sometimes cities issued their own local coins as well,” says McFadden. “People would look very closely at the new coins they saw in circulation.”

Present-day numismatists focus on various aspects of coins, but like McFadden they generally share a love of delicate engraving and the historical and cultural information that the coins convey. “Most serious coin collectors are busy, successful people and coins take them into another world—it’s a form of relaxation,” says McFadden. “Each coin is a window to the culture in which it was made, and a lot of what we know about ancient cultures is from our study of coins.”

But for all that, McFadden is primarily a businessman. His company specializes in ancient coins from Greco-Roman civilization, which extended across Europe, North Africa, the Near East and into South Asia. “I can immediately identify 99 percent of the coins I see in my area of expertise,” says McFadden modestly. What makes his job exciting is that he regularly comes across coins about which there is no previously published record. That, besides presenting a commercial advantage, gives McFadden an opportunity to research and write about the coins.

The value of coins spans an astonishing range. A low-quality Roman-era coin can be bought for as little as $1 to $5; ancient coins are rarely sold for more than $1 million. The highest price that McFadden’s company has sold a coin for is $575,000, a price which set the current auction record for a Greek coin. The coin, a three-dimensional silver tetradrachm auctioned this past January, is a striking 5th-century B.C. Greek masterpiece portraying the mythological nymph Arethusa. The coin was minted at a time when master engravers were breaking from the static forms of early classical art and creating new ways of representing motion and life in miniature.

The most expensive coins tend to be artistic. This is especially true of Greek coins, one of whose famous admirers, McFadden points out, was U.S. President Theodore Roosevelt. Roosevelt went so far as to ask one of America’s foremost sculptors, Augustus Saint-Gaudens, to redesign American coins on the Greek model. (Today  Saint-Gaudens’ high-relief $20 gold piece is still highly sought after.) “The best designs for coins are really great sculpture in miniature,” explains McFadden, underscoring one of the many artistic joys of numismatics.

McFadden began his career in the coin world in the summer of 1977, after graduating from Pomona College with a degree in classics. He volunteered to work on the coin collection of the then fledgling Getty Museum in Malibu. There, he learned that it’s virtually impossible for a new museum to build an outstanding collection of ancient statuary or ceramics, because the finest quality items are not available at any price. However, it is entirely possible for a well-funded museum to collect first-rate ancient coins, which are still regularly sold in the marketplace.

After pursuing further studies in classics at Oxford University, McFadden was fully bitten by the coin bug. During his three years at Oxford, McFadden spent his summers working for Numismatic Fine Arts, a Beverly Hills firm that was a leader in the ancient coin business at the time. (McFadden enjoyed the work so much that he ended up spending three years there after finishing at Oxford.) >>

Convinced that he could not build a successful career in a profession as limited as the ancient coin field, McFadden left the coin trade and spent the next three years studying law at Harvard, followed by four years working as an attorney in Los Angeles. But he couldn’t resist his calling, and in 1990 he decided to plunge into the coin trade for good by joining a fellow American and numismatist, Victor England, to form CNG.

Most of the people McFadden buys coins from are already known to him. “It’s a community, spread around the world, of people who know each other,” he says of coin lovers and dealers. In fact, when someone walks into his office, McFadden usually knows right away what coins are in that person’s collection. “If someone comes in who I don’t know, I need to satisfy myself that his coins are genuine and that they haven’t been stolen,” he says.

He does this by referring to notices about stolen coins regularly sent out by major trade organizations. “Fortunately, since ancient coins are hand struck, every piece has unique characteristics, so a stolen coin can be identified even many years later,” McFadden explains. “Once I’m happy with the coins, then I have to figure out the value and whether to buy the coins directly or auction them on behalf of the customer.”

McFadden is constantly wary of what he’s buying, given that the history of forgery is almost as long as that of collecting. Forgeries were made for the collector market starting in the 16th century—and the early forgeries are now themselves collectible as works of Renaissance art. “Just like every other area of art, if the objects are valuable there are bound to be forgeries,” says McFadden. “And one of the areas we pride ourselves on is making sure that everything we sell is authentic.

When McFadden authenticates a coin, he considers its “life story,” from the time it was manufactured to the present day. “What alloy and weight were chosen, how the blank was prepared, how the dies were engraved, what variations of style are characteristic, what method of striking was used, what natural effects of aging may have taken place over the intervening 2,000 years—I look at all these things,” he explains. Fortunately for numismatists, most fake coins are relatively straightforward forgeries intended for tourists. “Only a small percentage are potentially dangerous, but we always have to be careful,” says McFadden.

Even while fending off fakes and running a business with international reach, McFadden still tries to maintain some of the youthful wonder of coin collecting—and encourage it in others.

One of his most memorable “coin experiences” occurred when, at the age of 12, he came across a coin dealer at a numismatic show in Los Angeles. “An older friend of mine was looking through the dealer’s coins and I waited patiently until my friend was finished before I asked the dealer if I could look at his stock,” McFadden recalls. “He looked at me and said, ‘I can’t just let some kid look through my coins.’”

McFadden was stunned. “I think it was the first time in my life that I realized someone might not trust me, and that experience has always stuck with me,” he says. “Whenever I meet an interested young person, I make a special effort to be helpful and encouraging.”