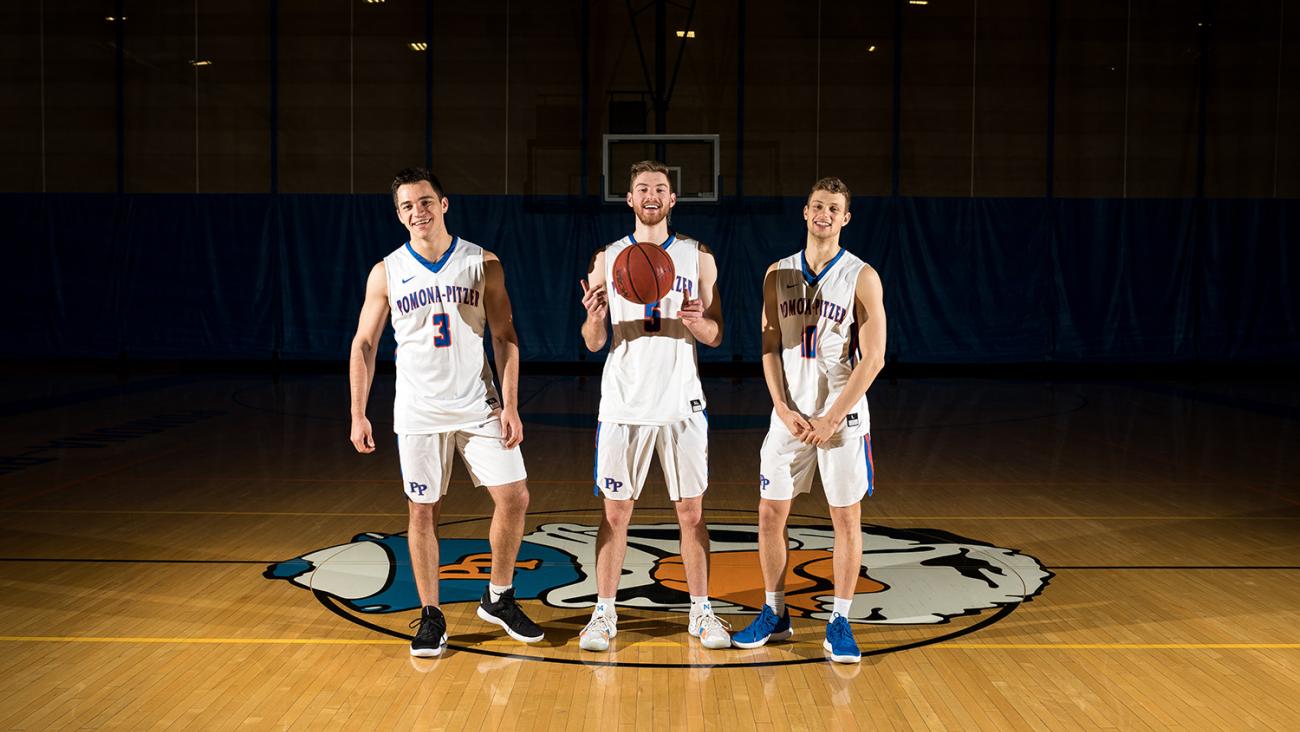 The teamwork began before Micah Elan arrived on campus. The summer before his first year, Daniel Rosenbaum ’19 and Corbin Koch ’19 started reaching out.

“We all live in the Bay Area and they were texting me, ‘Come to these open gyms and let’s get to know each other and work out,’” recalls Elan (PI ’20).

Less than three years later, the three guards are the backbone of the first Pomona-Pitzer team to crack the top 10 of the NCAA Division III men’s basketball rankings, and each of them has passed the 1,000-point career scoring mark, a rarity on one team.

The Sagehens already have set a program record for victories and clinched Pomona-Pitzer’s first regular-season SCIAC championship since 2005. They own an upset victory over Whitman, the nation’s second-ranked team, and won 18 in a row after a four-point defeat to Washington (Mo.) on Nov. 30. After just one loss by a single point in SCIAC games, they added their first conference tournament title since 2008 with a victory over Occidental in the championship game. (UPDATE: The Sagehens' appearance in the NCAA Division III tournament ended with a second-round loss to Whitman on Saturday after they defeated Texas-Dallas in the first round Friday.)

“Our first goal [was] definitely to win SCIAC, win the tournament, and then keep going after that and make it to the Final Four and win that,” says Rosenbaum.

“I think that honestly, in terms of goals, there’s nothing more than just winning the next game in front of us. The consequences of what happens when you win, like individual championships, those things will happen,” he says. “It’s not about the championships. It’s about the winning consistently as a group.”

It’s clear that it isn’t about the individual statistics. Koch, a physical guard Coach Charles Katsiaficas calls “one of the most competitive people you'll ever meet,” was the team’s leading scorer his sophomore year and is the fourth-leading scorer as a senior, averaging nine points a game. Elan, the super-smooth point guard who scored 38 points with six three-pointers against Whitman, is second at 16 points a game after leading the team last season. And the versatile Rosenbaum, the second-leading scorer each of his first three seasons, is leading the way with 19 points a game in his final season.

“I think what makes it so neat that all three of these guys are 1,000-point scorers is that none of them even care if they score a basket each night,” Katsiaficas says. “Obviously, they are each very talented players and good things happen for them on the court. But one of the main reasons for our success this year is because all three of them care more about our team’s success then their personal success.”

As talented as they are, the Sagehens’ greatest asset might be the way they play together, a quality Rosenbaum and Koch have nurtured.

“Our team's growth over the last four years, I would give those two a lot of credit for that,” Katsiaficas says. “In the last two years, they've really taken the leadership mantle in a very productive and positive way.”

It’s not only the summer open-gym outings. Six of the players live in the same suite on the Pomona campus – including Elan, even though he goes to Pitzer.

Sitting around a common room one day, players who already understood that they win as a team realized they lose as a team too.

“The thing that's actually really funny about this is that no one talked about how they felt personally responsible for that loss,” Koch says of the Sagehens’ first defeat. “So for a while there I felt like that was completely on me. I turned the ball over way too many times that game down the stretch. I brought it up a week or so ago and basically admitted that it was my fault. Every single guy to a T was basically like, ‘No that was my fault,’ or ‘No, no, no, that was my fault.’”

Rosenbaum laughs: “Everyone had put the blame completely on themselves without discussing it with anybody else.”

Bring what it may, this special season will soon be over. Whatever boost it brings to the program could pay dividends, especially as Pomona-Pitzer prepares for a 2020 groundbreaking on a new campus athletics center. But the core of this team will have moved on.

Koch, an economics major with a computer science minor, is headed for New York, where he will work in business development for Jane Street, a quantitative trading firm. Rosenbaum, a computer science major, hopes to play professionally overseas and is applying for Israeli dual citizenship to boost his chances because of limits on how many U.S. players a team can have. (His father was born in Israel, and his older brother Simon Rosenbaum ’16 played baseball for Pomona and later for the Israeli national team.) Elan still has another year as a Sagehen, but the economics and environmental analysis major also hopes to play overseas, taking advantage of his dual citizenship with the United Kingdom.

Wherever they go, they will have left their marks on Pomona-Pitzer basketball.