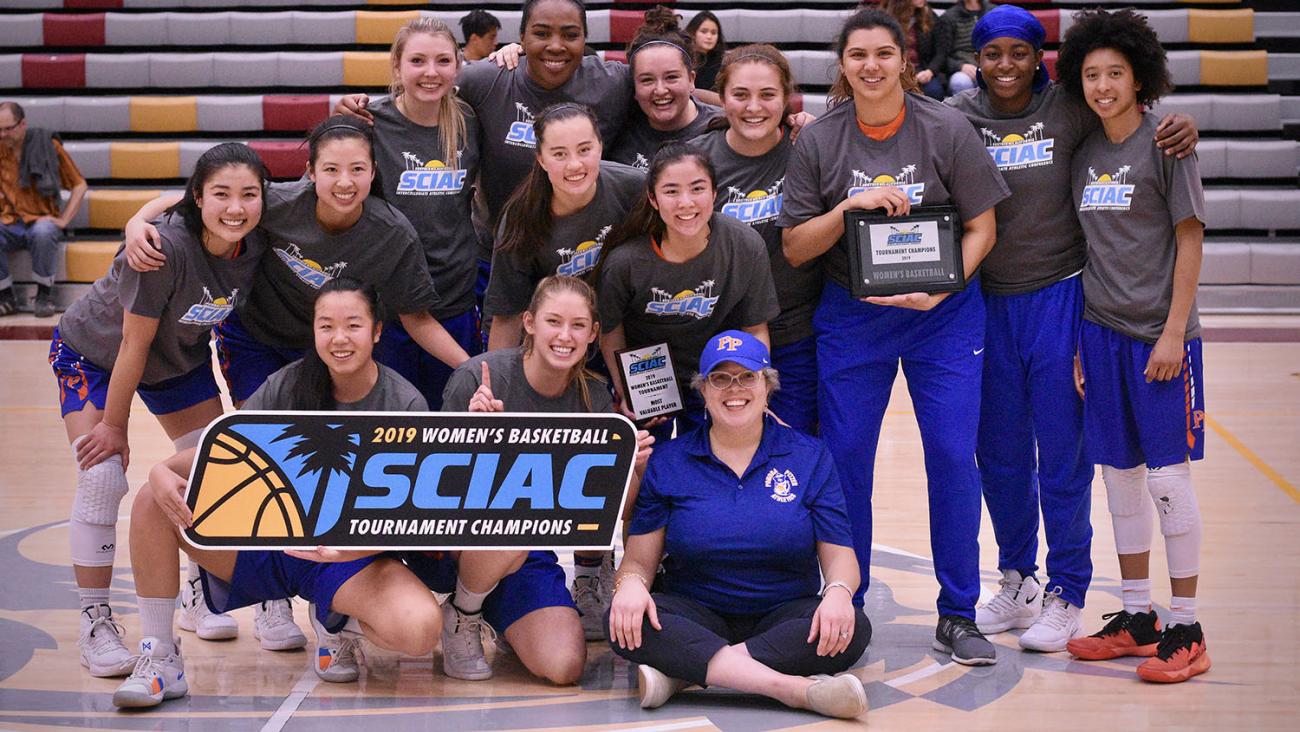 Reaching the top of the ladder to snip the net after earning a berth in the NCAA tournament seems like that much more of a climb when you consider how far the Pomona-Pitzer women’s basketball team has come.

Just two years ago, the Sagehens went 1-23 in Jill Pace’s first season as coach. Last year, they won eight games. Now they are 22-5 after upending Claremont-Mudd-Scripps on the Athenas’ home court Saturday, ending their rivals’ 20-game winning streak in front of a rollicking crowd to claim Pomona-Pitzer’s first SCIAC tournament title. (UPDATE: The team's appearance in the NCAA Division III tournament ended with a first-round loss to Wisconsin-Oshkosh on Friday.)

The SCIAC final was “insanely fun,” Pace said after the game, and that was before the Sagehen men made it a double a couple of hours later on the other side of Sixth Street, winning the men’s SCIAC tournament and NCAA berth with a resounding defeat of Occidental in Voelkel Gym.

The first woman to take scissors to the net was one of the players who endured that one-win season, tenacious 5-foot-2 point guard Keilani Ikehara PI ’19. She played every minute of the title game and was named the tournament’s most valuable player after willing the Sagehens to a 60-57 victory with 16 points, four assists, four steals and, somehow, three rebounds. Maybe the only time she looked uncertain all night was on the ladder.

“That was my first time,” she says with a laugh. “Last year we did this team-bonding thing, climbing these rope contraptions. I was scared then and I felt like I was going to fall today, but it was the best feeling at the same time. The best feeling in the world.”

One by one, the players who are the future of the program Pace has built in just three seasons took their turns.

There are only four seniors on the roster, and the top three scorers this season – Carly Leong PI ’22, Kamil English ’22 and Cameron Edward ’22 – are all first-years. Leong scored 15 points in the title game, and another first-year, 6-foot-3 forward Amara Chidom PI ’ 22, had nine points, six blocked shots and 11 rebounds. Relentless defense helped hold CMS to 34.3 percent shooting.

“Coach Pace has done an amazing job recruiting the freshman class, and I’ve heard she has a few more coming in,” says Renae Tamura ’21, who added 12 points and six rebounds. “Obviously, we’re very sad to lose our seniors. They’ve really paved the way and they’ve created an inclusive and dynamic culture that I think helps us play well together on the court. I’m really excited for the next few years.”

Saturday’s win was a catharsis for two season ago. All four seniors were part of that team. Raquel Viramontes was an assistant coach. Pace’s other assistant, Alaina Woo '17, was a senior captain.

“Winning one game on paper looks pretty bad, but I think we learned so much from that,” Pace says.

Pace was the last to step on the rungs of the ladder. She did it deftly, in heels. She has climbed a few before, reaching the NCAA tournament four times as a player at Bowdoin, once as an assistant coach at Smith, and twice as an assistant at Tufts, where the teams she helped guide went 58-7 in two seasons, reaching the Final Four twice and the NCAA championship game once.

She told her players to enjoy the moment, but also something else as they await the announcement of their first-round opponent Monday.

“I told them in the locker room to not be satisfied.”