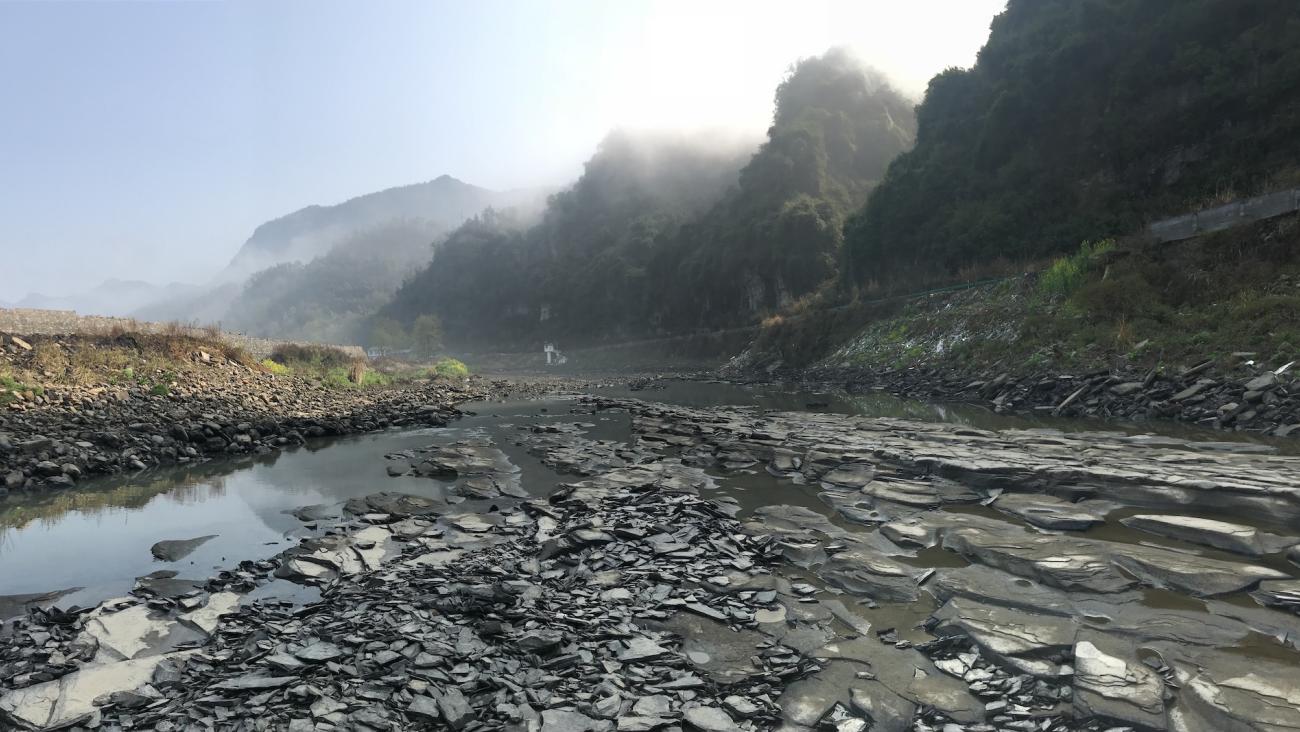 Story Date:
The Danshui River, in the Yangtze Gorges area of South China, is home to a remarkable Burgess Shale-type site, the Qingjiang biota.
Photo by:
Robert Gaines

A 518 million-year-old fossil site unearthed in the Yangtze Gorges area of South China may turn out to be the most significant Cambrian fossil site discovered in modern history, according to an article released today in Science.

A remarkable Burgess Shale-type site, the Qingjiang biota was discovered by a team of Chinese researchers in South China. The newly found site is home to a nearly pristine and diverse 500-million-year-old fossil record that has not been impacted by metamorphosis or weathering.

This diversity of fossils may rival that found at the Burgess Shale of British Columbia and the Chengjiang fossil site in Yunnan province in China, which are considered two of the most important fossil finds of the 20th century, says Pomona College Professor of Geology Robert Gaines, the only American on the team. The new site is more than 600 miles from Chengjiang.

In addition to the high taxonomic diversity, Qingjiang fossils are characterized by near-pristine preservation of soft-bodied organisms—including juvenile or larval forms, arthropod and worm cuticles and jellyfishes—and such soft-tissue features as eyes, gills and guts. More than 4,000 specimens have already been collected, with 101 species identified – of these species, 53 are new to science and names have to yet to be assigned.

“This finding enriches our view of the early animal world and offers us really remarkable views of the simplest animals,” says Gaines. “One of the most incredible things about this finding is the pristine condition of many of these specimens—fossils that haven’t been substantially affected by impacts of time, and in them you can clearly see soft tissues like eyes, tentacles and gills.”

The discovery of this new Burgess Shale-type Lagerstätte—a geologist’s term for a deposit of extraordinarily well-preserved fossils—was made by a team of scientists from China almost by accident. The Chinese researchers were working in the mountains and came down to the banks of the Danshui River, located in Hubei Province, when they noticed some rocks had an odd pin-striped pattern – a telltale sign of layers of mud deposited rapidly by ancient storms similar to those found at the famous Chengjiang site.

Gaines, an expert on the Cambrian explosion and Burgess Shale-type deposits who was also part of the team that discovered a new Burgess Shale site in Canada’s Kootenay National Park in 2014, joined the Chinese team in 2016 by working on material in his laboratory at Pomona College and made his first visit to the Qingjiang field in 2017.

“I was invited to help them understand the discovery and contribute my knowledge,” says Gaines, who describes being approached by his colleague Xingliang Zhang at a conference in Australia. “He pulled out a pristine chunk of rock black with striking gray stripes and when he said where they found it, I didn’t believe him at first,” says Gaines. “I was in disbelief at the magnitude of such a discovery.”

The authors say that the discovery suggests that the current understanding of Cambrian Period ecosystems is far from complete, but future discoveries in the area where the Qingjiang biota was discovered will help inform our growing knowledge.

“The discovery promises to shed light on the evolution of Cambrian ecosystems across space and time,” says Gaines. “Nowhere do have a more pristine fossil record of early Cambrian life and such a diversity of organisms – and this is just the beginning.”

Gaines’ work on the Cambrian is supported by a grant from the National Science Foundation.