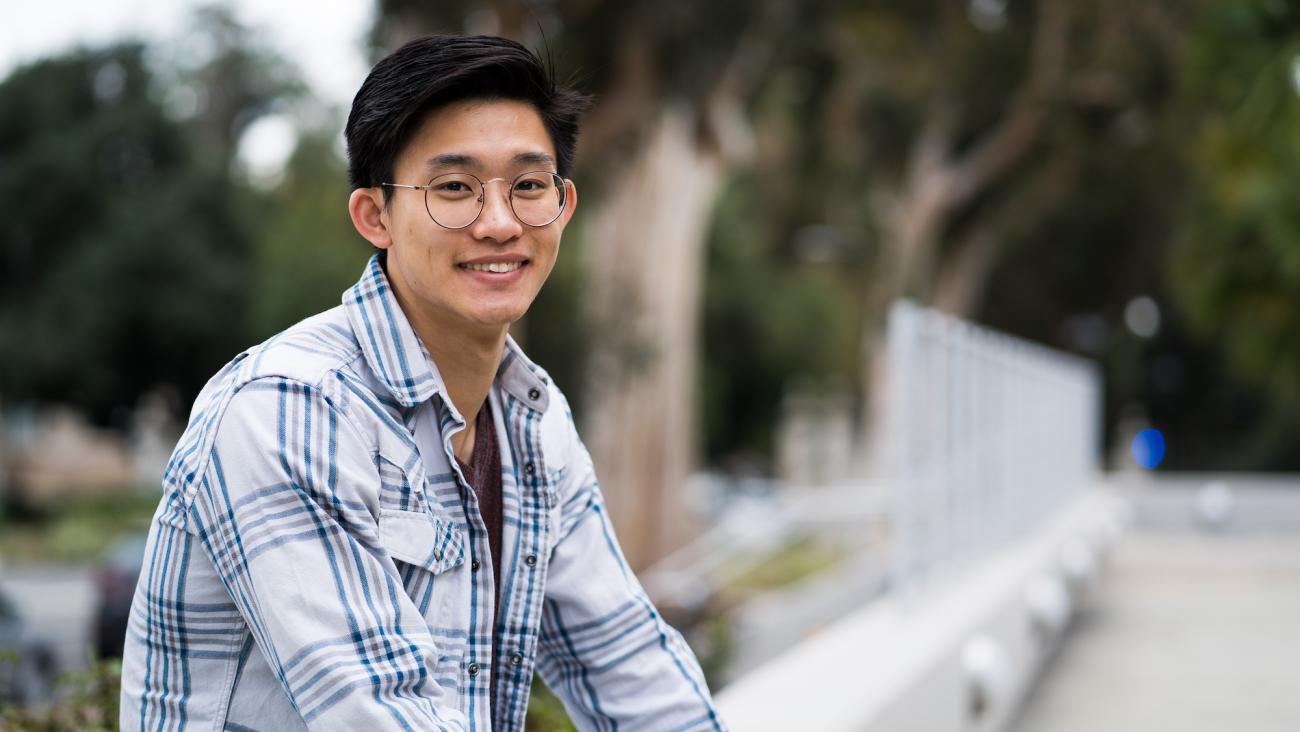 It was the start of the spring semester and Lawrence Chen ’20 had not yet heard back from his advisor, Professor of Chemistry Roberto Garza-López. He was worried it spelled bad news for the research article they co-authored and submitted in late fall to Chemical Physics Letters: X, a new but prestigious chemistry journal.

Sitting in Garza-López’s Physical Chemistry class – the first one of the semester – Chen and his classmates were almost ready to leave when their professor pulled up a Power Point presentation explaining what Chemical Physics Letters: X  is, and describing the journal’s distinguished editor, Professor Sir David Clary. Clary is a theoretical chemist, a fellow of the Royal Society and president of Magdalen College at the University of Oxford. The last slide: A screenshot of an email announcing that “Markovian Model for Photoinduced Charge Separation in Dendritic Molecules” had been accepted for publication in the second volume of the journal to be published in April 2019. Garza-López is the principal investigator, with Professor John Kozak of DePaul University and Chen as co-authors.

Chen was speechless, the class impressed. Garza-López, who has been teaching at Pomona since 1992, was elated: “This doesn’t happen every day and I didn’t want him to go unnoticed for his work.”

For the past two years, Chen had spent his summers and a semester working with Garza-López doing calculations in computational chemistry to verify the experimental results put forth in a groundbreaking article published by polymer chemist Prof. Takuzo Aida and his colleagues from the University of Tokyo. The experimental paper took a look at light-harvesting dendrimers that are well-defined tree-like macromolecules. Aida and co-workers wanted to test the energy transfer efficiency in these dendritic molecules – specifically, how to convert solar energy into chemical reactions. Chen’s job, under the tutelage of Garza-López, was to verify those results using a different method than the one the Tokyo team employed. Not only were they able to confirm the experimental results via the theoretical/computational approach of Garza-López and colleagues, but they also discovered the next most efficient growth of these dendrimers.

The Pomona team set up a system of Markovian equations to model the electron transfer between donors and acceptors. Chen saw similar trends to what Aida’s group got, he says. “We next spent time refining our data like getting rid of errors, debugging things and writing the manuscript. It’s been a long process.”

Garza-López adds, “I finished writing the paper in November 2018 and I decided to send it to one of the best journals in my field and I was expecting the editor to say, ‘This is wrong, you should change your computational approach,’ or ‘send it to a lower ranking journal.’”

Instead, Clary sent back two rounds of comments and questions – a positive sign that had Garza-López working through his winter break into New Year’s Eve making modifications to the paper.

While Garza-López busily worked on the paper, Chen was equally busy – but not with computational chemistry problems.

Instead, Chen was rehearsing and performing The Nutcracker, Cavalier, Soldier Doll, and Russian roles in the Inland Pacific Ballet’s “The Nutcracker” – which showed in December at different venues, including Bridges Auditorium.

Chen is not only a gifted chemist; he is also a talented dancer who has been studying ballet since the age of 14. As a teenager Chen trained professionally at a local studio, and when he arrived at Pomona, he thought he would have to drop dance completely to focus on academics.

Chen ended up taking a ballet class at Pomona taught by Victoria Koenig, a lecturer in theatre and dance who is also the director of the Inland Pacific Ballet dance company. After a year of seeing the talented Chen in her class, Koenig invited Chen to audition and join the company. He has been dancing with them for the past year and a half.

The rehearsals and performances take many hours per week, but Chen has found strong support from the Chemistry Department as he pursues his passion.

“A few professors have gone to see some of my performances,” says Chen, recalling pictures with Garza-López during “The Nutcracker” in 2017 and from the 2018 production at Bridges Auditorium with other faculty.

“I’m living my professional dream while still being able to go to school,” says Chen, even though he admits sacrifices have to be made like not being able to be in class during performance season. “Thankfully, last semester a lot of my classes were project-based, and I made compromises with my group members: If I couldn’t be in the lab then I could help writing reports.”

“I had a good supportive group of friends and I went to see professors during office hours,” he adds.

Chen says the accommodating atmosphere in the Chemistry Department is typical of Pomona, pointing to friends who are in orchestra and find similar flexibility and support from faculty.

“The liberal arts experience is both academic and non-academic,” says Chen. “The opportunities are vast and it’s almost impossible to not take advantage of the things offered to you. I couldn’t imagine doing research at another school – let alone take dance and classes at the same time without being a dance major -- but if you’re at Pomona you have these opportunities available to you.”

With a little over a year left at Pomona, Chen plans to continue dancing while also studying chemistry. He’s in the process of deciding what his senior thesis in chemistry will focus on but says he’s almost sure it will be related to protein folding research led by Garza-López .

Garza-López says Chen has a bright future ahead in chemistry – if that’s what Chen chooses to pursue, but he can also become a professional dancer. “He has all these possibilities – the doors are open for him.”