Two-Sport Captains Learn to Keep Balls in the Air 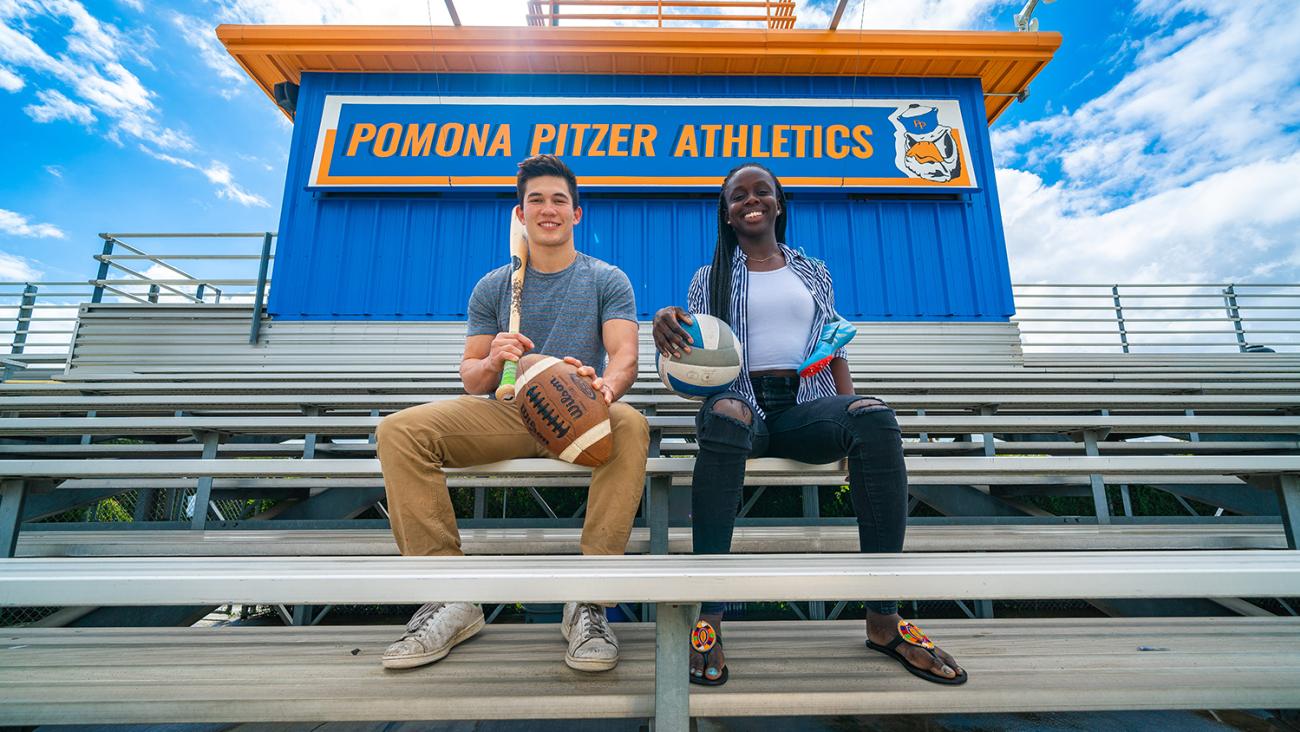 There are seemingly endless tips for time management, but Vicky-Marie Addo-Ashong ’20 and Andrew Phillips ’19 seem to have found a novel one.

They leave themselves practically no free time to manage.

The two accomplished Pomona College students are both two-sport athletes – and are captains of both of their teams.

“I’ve never considered myself a person who likes to have a lot of free time. If I do, I just sleep a lot,” says Addo-Ashong, a track and field athlete who holds the Pomona-Pitzer records in the triple jump and 100-meter hurdles but says her true love is volleyball.

Phillips finished his career as a defensive back on the football team with a second consecutive win over Claremont-Mudd-Scripps in the Sixth Street Rivalry game last fall and is a senior utility player for the baseball team this spring.  What’s more, he’s a pre-med student who already scored well on the MCAT after taking the 7½-hour test last August – the day before he arrived on campus for football camp.

“My time management has definitely improved over the course of my college career,” says Phillips, suggesting it hasn’t always come naturally. “There are always times where you are like, ‘Aw, I should have done something productive there.’”

Addo-Ashong, a public policy analysis major and mathematics minor from suburban Washington, D.C., is very active on campus. She’s a campus tour guide – “I love being at Pomona and I love being able to show it to other people,” she says – a member of the Student-Athlete Advisory Committee (SAAC), and one of five students on the President’s Advisory Committee on Sexual Violence Intervention and Prevention, which is in its first full year.

“That’s been really interesting and important. Being part of that process, I’ve found that to be something I care about a lot,” she says.

Addo-Ashong also works as a research assistant to her academic advisor, Pierre Englebert, professor of international relations and politics. And last year, she was one of the leaders of a sponsor group and commissioner of sports for the Associated Students of Pomona College.

Need a nap yet?

Phillips is also involved in the Student-Athlete Advisory Committee and is president of a campus club, the Claremont chapter of Health Guardians of America, a group working to eliminate obesity on college campuses.

What’s more, Phillips has an added degree of difficulty in managing two sports as a neuroscience major preparing to apply for med school. That’s because lab classes – a crucial part of his coursework – often don’t end until after practice begins.

“When I was getting recruited, the Division-I schools said you have to do econ or history or something like that; basically, you couldn’t take labs,” Phillips says. “So that was part of why D-III. The coaches are really understanding about labs and the importance of academics. Also, the two-sport thing, that’s something special about D-III for sure.”

This spring, Phillips has a genes and behavior lab on Tuesdays that starts at 1:30 p.m. and gets out around 4, but practice starts at 3:15. Usually that means putting in extra work before practice or staying late, taking extra batting practice or such. Sometimes, the conflicts are more extreme.

“My junior year, I had a biochemistry lab, which is the lab that takes the most time, I think. I took that during football season and so I remember a couple of practices where I’d literally be in lab until 6 p.m., and the coaches didn’t get mad or anything.”

With med school in mind, Phillips also has made use of his summers and breaks. He trained as an emergency medical technician (EMT) after his first year at Pomona and shadowed emergency room doctors at hospitals in Torrance and San Pedro after his sophomore year, along with working in a research lab at Caltech. Last summer, he also worked as an emergency department scribe at St. Francis Medical Center in Lynwood, taking medical notes on a laptop as doctors and nurses treated patients. He has continued that work over college breaks. Phillips is considering orthopedics as a specialty partly because of his interest in sports, but the adrenaline of the emergency room also has appeal.

“I enjoyed that, the idea that you didn't know exactly what was coming in,” he says. “The pressure situation.”

Team captains, often three or four players who share the role, are sometimes chosen by a vote of teammates and sometimes by coaches. They are leaders on and off the field of competition, counselors for teammates and go-betweens with coaches.

Last summer, she interned at Public Citizen, a consumer rights advocacy group in Washington, D.C., in the Global Trade Watch division. She envisions returning to Washington after graduation to work for a couple of years in a field adjacent to politics or public service before likely returning to graduate school.

“I have a broad range of interests and I’m not really sure what I’ll end up doing,” she says. “Everything from country development to justice policy interests me, so I just plan on seeing where life takes me.”

First, with one volleyball season and most of two track seasons to go, she has a goal: After finishing 20th in the triple jump at the NCAA Div. III track and field championships last year, she hopes to make the top eight to become an All-American before she’s done. Addo-Ashong also is a standout in the 100-meter hurdles, with nationally ranked marks in both events.

Phillips will continue scribing after graduation while applying to enter med school in 2020, and he envisions taking the skills he learned on the field and in locker rooms into his professional life.

“For me, one thing I’ve needed to work on and develop is having the tough conversations with people you’re close with. All my best friends play on those sports teams, so having to talk about why they shouldn't quit or why they're not playing right now, those have been kind of tough,” he says.

“I would say that's been a difficult part for me. And that's something that as a doctor you have to have – tough conversations. That’s a really helpful skill, for sure.”