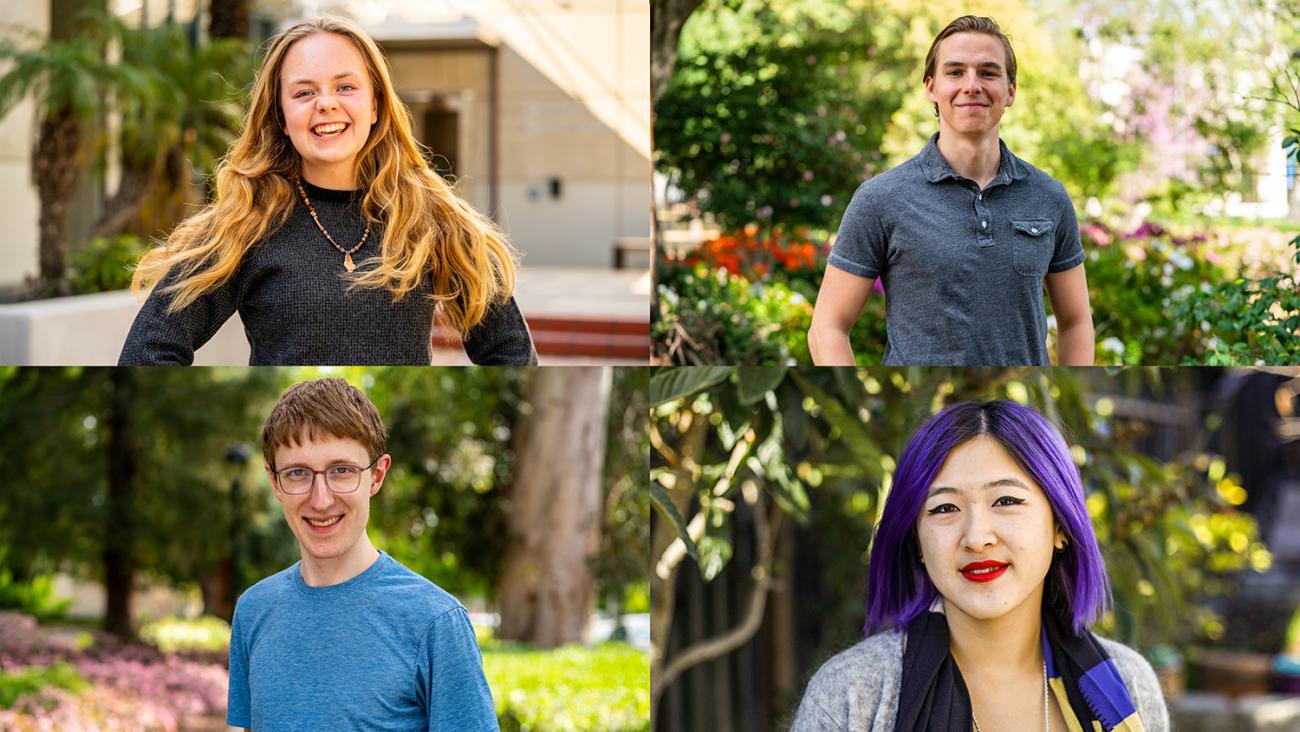 Sal Fu ’19, a physics major from San Ramon, California, will pursue a Ph.D. in astrophysics at UC Berkeley. Fu, who plans to become a professor, is looking forward to using both theoretical and observational methods to study stellar populations and galaxy evolution.

For the past three years Fu has been doing research at Carnegie Observatories in Pasadena, Calif., studying galactic chemical evolution and the nature of dark matter by looking at the Milky Way’s satellite galaxies. Her work has been published twice in The Astrophysical Journal, a professional research journal.

“Since my research interests are broad, I am excited to receive this fellowship because an external source of funding will give me greater flexibility in exploring different projects,” Fu says.

The recipient of a Goldwater Scholarship last year, Fu notes her gratitude to the Physics Department and the support and encouragement she received from Professors Philip Choi, Jorge Moreno and Janice Hudgings. Fu says the department, Pomona College and Carnegie Observatories have all been “communities [that] provided safe spaces where I feel like I can ask questions, make mistakes, and most importantly, learn.”

Abby Lewis ’19, a biology major and Spanish minor from Waukesha, Wisconsin, will be pursuing her Ph.D. at Virginia Tech with the aim of becoming a professor of aquatic ecology. In her graduate research, Lewis will experimentally add dissolved oxygen to the water at the bottom of a reservoir to test how changes in the amount of oxygen affect carbon cycling within the reservoir. Because of the large role lakes and reservoirs play in the global carbon cycle, Lewis says “any changes to carbon cycling under different oxygen conditions would have important implications for our predictions of future greenhouse gas emissions and climate change.

During her sophomore year, Lewis almost failed an exam in her cell biology class. She went to Professor of Neuroscience and Biology Karl Johnson’s office on the verge of tears to ask for help, she says. He reassured her that one test wouldn’t define her — he’d had a student who had failed the same test and went on to win an award from the National Science Foundation.

“I had no idea what the award was at the time, but I went back to my room and looked it up, and I've kept that in my mind as the definition of success ever since. Last week I went back to Professor Johnson's office, overjoyed to tell him that I just received that same award.”

While a student at Pomona, Lewis has coauthored two publications, and is first author on a paper that is currently in review. Lewis has also presented at national and international conferences, including the annual meeting of the Global Lake Ecological Observatory Network and the Council on Undergraduate Research's Research Experiences for Undergraduates (REU) symposium.

Lewis says the NSF award means a lot to her because it is based both on intellectual merit and the recipient’s use of science for broader societal impact. Much of Lewis’ work while at Pomona meets both criteria, including her serving as a tutor for three underrepresented high school students through Upward Bound and teaching at a bilingual school.

Brian Lorenz ’19, a double major in physics on the astronomy track and mathematics from Chicago., will be pursuing a Ph.D. in astrophysics at UC Berkeley to study how quickly distant galaxies are forming stars, to help reveal how galaxies change over the lifetime of the universe. Lorenz says this work helps explain how the universe came to be what it is today. He says his hope is to become a lifelong researcher and teacher.

Before doing research at Carnegie Observatories, Lorenz got his start looking at nearby asteroids with Professor Choi and looking for objects that change in brightness through data from the Hubble Space Telescope with Visiting Instructor in Physics and Astronomy Elijah Quetin.

“Both of these projects were crucial in getting me excited about research and giving me a solid foundation of skills, and both faculty members have been wonderful mentors,” says Lorenz.

This past January, Lorenz was the recipient of the Chambliss Astronomy Achievement Student Award, given by the American Astronomical Society.

For him, the freedom that the NSF award provides is what excites him most — freedom from the burden of funding and freedom to work with whoever he wants to. And the path to that freedom was paved at Pomona.

“The Physics and Astronomy Department, both faculty and students, has been an essential part of my time here. Seeing amazing work and being cared for by fantastic people in the department has been my biggest inspiration and support system at Pomona.”

Cristian Woroch ’19, a chemistry major and mathematics minor from Oakland, California, will be earning his Ph.D. in chemistry at Stanford University, and plans to conduct research in the areas of catalysis in electrochemical reactions and/or materials engineering with applications in renewable energy generation and energy storage. After receiving his Ph.D., he hopes to do postdoctoral studies and pursue a career in academia.

At Pomona, Woroch works in the lab of Chemistry Professor Nicholas Ball. Their research, in collaboration with Pfizer, is focused on synthesizing sulfamides — a class of molecules useful in pharmaceuticals — from sulfamoyl fluorides. Their newly developed method is safer than the traditional sulfamide synthesis which uses corrosive and hazardous sulfamoyl chlorides. They plan to publish their results this summer.

Woroch says, among many sources of inspiration, Ball has been a significant figure in his time at Pomona, as a mentor, role model, advisor and friend, helping him both inside and outside the lab. Whether it was choosing classes, applying to graduate school or helping Woroch find his place in chemistry, Ball is “truly and fundamentally dedicated to his students. He has put an extraordinary amount of effort into helping me become the best scientist that I can be.”

Woroch’s parents have been major supporters as well.

“They constantly remind me of the power and privilege of an education and urge me to follow my intellectual passions with full force.”

Woroch has won numerous awards during his time at Pomona, including the Beckman Scholarship for undergraduates of exceptional promise in research, the summer research Amgen Scholarship, an American Chemical Society Scholarship and an EDGE Fellowship at Stanford, for incoming underrepresented graduate students.

This year, the NSF awarded 2,050 students graduate research fellowships, selected from approximately 12,000 applicants. The support is for graduate study that leads to a research-based master's or doctoral degree in a STEM field.