Mary Kamitaki ’15 Takes a Childhood Passion to the Professional Stage 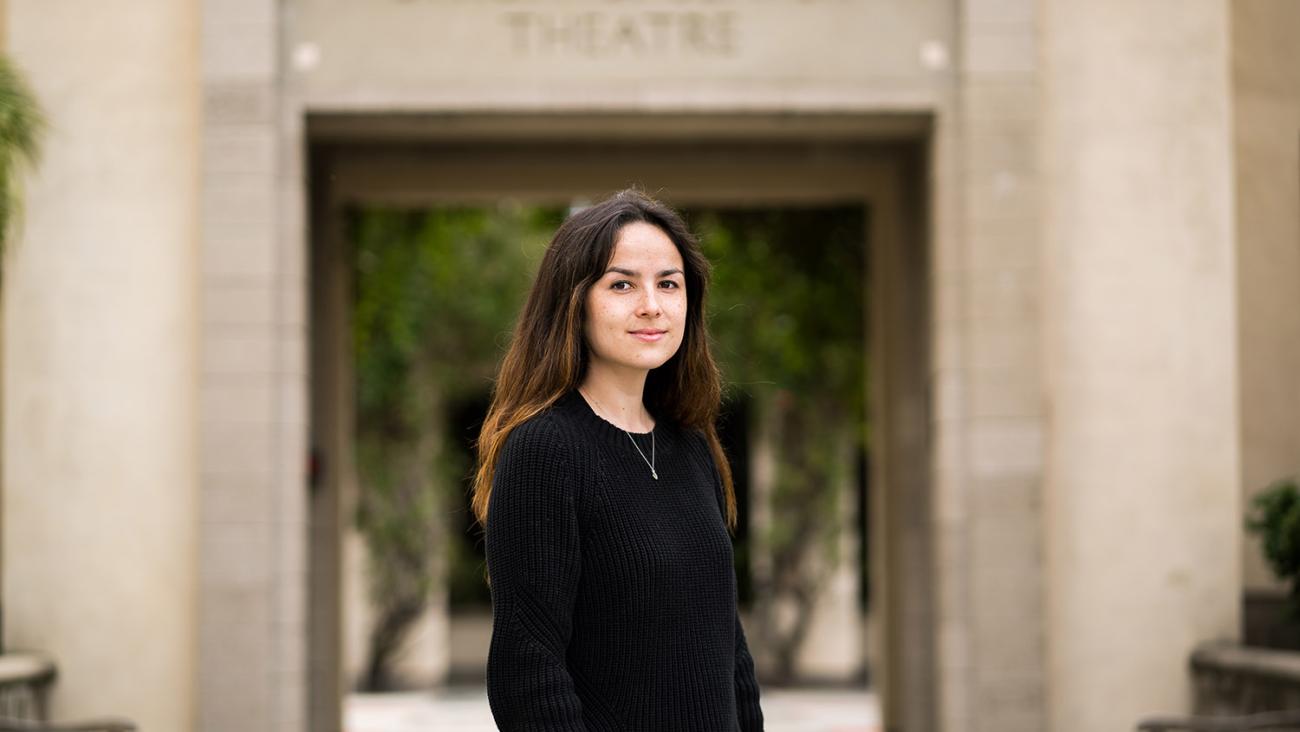 Mary Kamitaki ’15 started doing theatre when she was little, a budding “backyard” playwright, performing plays based on fairy tales with her friends, complete with a bedsheet as a stage curtain. The curtain didn’t close in her childhood — and it’s not closing anytime soon. Now the play she wrote, “Southernmost,” is running at the Playwright’s Arena Theatre in Los Angeles, her first professional production.

Kamitaki’s “Southernmost” is about a coffee farmer in rural Hawaii and his daughter who returns home for the first time in years with her girlfriend. Shortly after she arrives, their home is threatened by a lava flow and they have to decide to abandon their land or stand their ground. Critics have noted the emerging playwright’s talent.

Stage and Cinema writes, “Kamitaki constructs the play with a sure sense of place and character.” “Audiences can rest assured that while “Southernmost” is in town, 80 minutes of entertaining, engaging theater are a sure bet on the Playwrights’ Arena stage,” reviews Stage Scene L.A.

While Kamitaki’s childhood in Hawaii suggested stage promise and combined her two favorite things, reading and playing, her double major at Pomona may come as a surprise: math and media studies. For Kamitaki, a liberal arts education made life bigger not smaller. She says it allowed her to pursue all the things she was interested in and helped her find the path to playwriting. Kamitaki had never actually written for theatre until she came to college.

“It wasn’t until my senior year that I figured out what I wanted to do. But the other disciplines I studied in the meantime were fulfilling and continue to deepen my understanding and appreciation of the theatre world now.”

While the disciplines she studied were disparate, she says, “I do think there’s a kind of mathematical way I approach playwriting and dramaturgy now in terms of the flow of logic and framing of ideas and worlds.”

While at Pomona, Kamitaki took a writing class with the late Professor of Theatre Art Horowitz who introduced her to contemporary theatre and gave her the space to explore dramatic writing, she says. Before that class she never really knew there were still people alive writing plays.

“I knew about people like Shakespeare and Chekhov, but no living playwrights, and I had never even considered writing to be a real option for my future.”

Professor of Theatre Giovanni Ortega was another major influence during her time at Pomona. He directed her in “Spring Awakening” her senior year and taught a directing class she took. Kamitaki says he reignited her love for theatre and showed her it was possible to be a working theatre artist.

That real possibility became a real pursuit. Immediately after graduating from Pomona, Kamitaki went to USC for graduate school to study dramatic writing, which included playwriting and screenwriting. Since completing the program last year, she has been working and writing with New West, Ensemble Studio Theatre/LA.

The writing process is constantly evolving for Kamitaki. Usually she starts with a character or a world. In the case of “Southernmost” she started with a language: Pidgin, also known as Hawaiian Creole English. She says that for her everything serves as inspiration. Family. Relationships. Reality TV. Whatever’s bothering or scaring her or making her mad, she says. Reading new work from fellow writers also pushes her to go further and reach higher.

Kamitaki calls the experience of seeing her work on stage as both exciting and “kind of bizarre.”

“This play, in particular, is very personal, and seeing it designed, directed, built and performed by other people — and then witnessed by an audience— is kind of like having an out-of-body experience. It’s very fulfilling but also kind of disorienting.”

“ Southernmost ” runs through May 6 at Playwright’s Arena in Los Angeles.