What Will You Do With That Major? 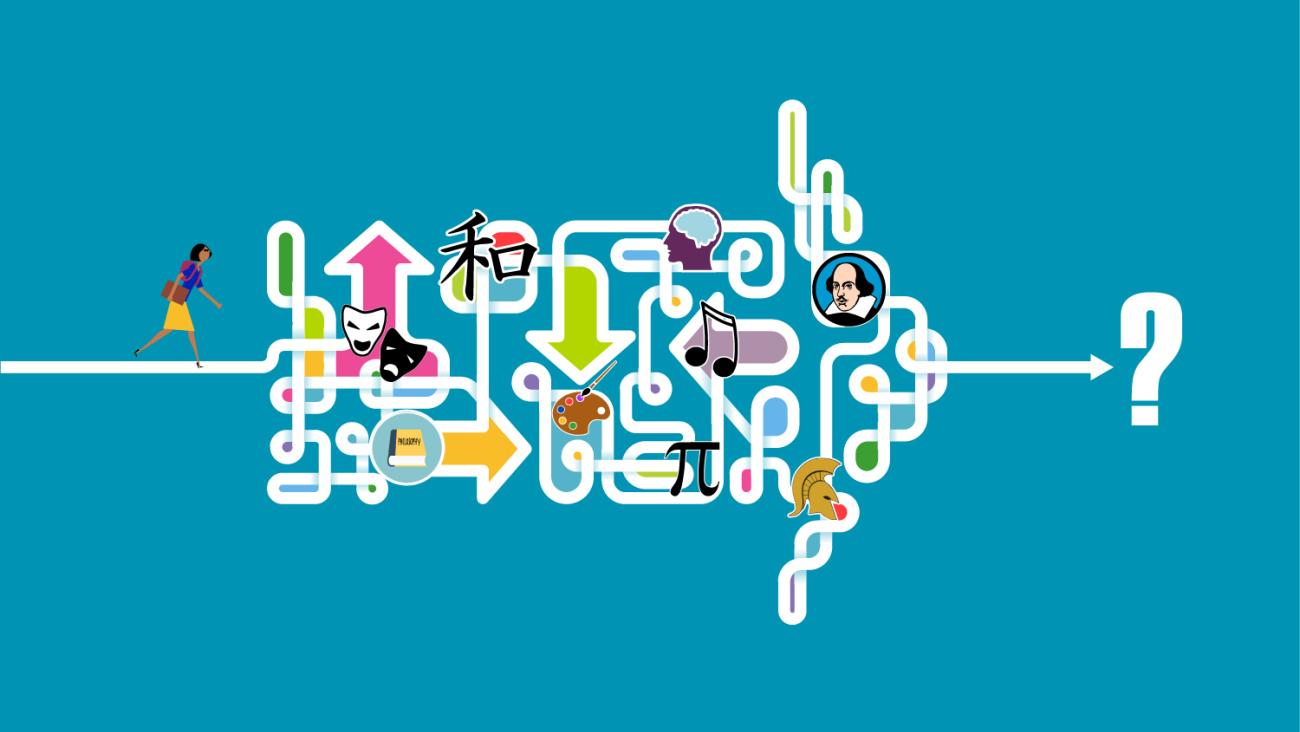 They majored in what they loved. Given time to explore at Pomona College, some students choose a different major than they would have if they'd had to decide during the application process, as some colleges require. Here, the wide interests of Pomona students and the classes that inspire them often take them in unexpected directions.

“It’s one thing I admire about a lot of our students: It’s ‘I don’t know, I was thinking I would either do physics, or maybe philosophy,’” says Kevin Dettmar, director of Pomona’s Humanities Studio and professor of English.

Planning for a career by gaining work experience through internships or research is important, but Dean of Students Avis Hinkson – once headed for a career in healthcare – says students should become comfortable with a path that isn’t always straight.

“You need to figure out what’s next,” she says. “You don’t have to figure out what 25 years later will look like. In fact if you try to, sometimes you close doors that can lead to really great places. So allow yourself the detour. It may become a new path or it may just be a detour, but you’ll learn something either way.”

Here are the journeys of four alumni whose majors have led to careers they couldn’t have imagined.

A modern-day spice trader, Kadri founded a company in 2017 that already has been featured by the New York Times, Vogue, Bon Appétit, Forbes and Food & Wine. The photographer and former marketing manager melded her interests in food, art and her native India to launch Diaspora Co., a socially conscious importer of fair-trade, organic turmeric.

Amid the trendy demand for the golden spice and its health benefits in almost anything from vegetables to lattes, Kadri’s company purchased 6,000 kilograms of heirloom turmeric last year – more than 6½ tons – from a single organic family farm in India. This year, she expects to import more than 11 tons of turmeric and begin selling cardamom and black pepper as well.

At Pomona, “I was actually deciding between art and economics, which sounds funny, but those were the things that I loved,” she remembers. “I think one of the first things I said to my advisor, Mark Allen, freshman year was if I could figure out ways to bring food and art together, then I would definitely be an art major, and he said, ‘OK, well, I can introduce you to people who are already doing that.’”

While traveling in India on a freelance assignment after leaving her marketing job at a high-end grocery chain in San Francisco, Kadri became fascinated by what was happening – or about to.

“Turmeric was exploding and a lot of the research that I had done when I was in school was around coffee and chocolate, and basically understanding supply chains,” she says. “I took a lot of food justice classes – specifically, senior year I took a great course with Heather Williams that really informed a lot of my thinking around what food justice looks like. So I knew that in the case of quinoa, for example, it got really popular. It became a superfood but it really devastated the indigenous supply chain for it, where Peruvians actually can't afford quinoa anymore.”

The spice trade hadn’t changed since colonialism, she says, recalling her realization: “I have the opportunity to quite literally decolonize the spice trade, so sign me up.”

Her brilliantly colored photographs and marketing attracted attention, as did a sophisticated blog post explaining her journey. “Pomona taught me to write,” she says. The turmeric trend may cool, but Kadri has visions for other spices as well as Indian varieties of rice.

“You know, we definitely changed the life of this one farmer and he's changed ours, and it would be incredible to have that kind of impact with more and more farmers over time.”

A class called Philosophy in Literature with Professor Stephen Erickson during Glaser’s first semester at Pomona set her on her path. “Within two weeks of his class, I knew I was going to major in philosophy,” she says. “I remember a lot of people asked me, ‘What are you going to do with philosophy? What’s the practical application?’ But to me, the questions of how to find purpose and how to live ethically and according to my values felt essential to my every day.”

As Glaser prepares for a career in palliative care by studying the experiences of underserved women with advanced breast cancer before her final year of medical school, that has never been more true.

“I think there is a lot of philosophy – fundamental human questions of values and meaning – that comes up in illness, particularly toward the end of life.” Glaser says. “There’s a lot of room for these philosophical and soulful questions within palliative and hospice care. That’s absolutely part of why I’m drawn to it.”

“I was amazed at how much I loved talking to patients,” she says. “To feel like there was something useful I could offer someone in a moment of worry or vulnerability and to support them in making their own decisions without having an agenda for them, I had never had an experience like that. I was so invigorated by it that I decided that’s it, I’ll go to med school.”

Glaser completed post-baccalaureate studies at the University of Oregon to prepare for the MCAT with a 4.15 GPA on a 4.0 scale and applied to medical school with a wealth of real-world experience and a clear purpose.

“There seems to be a real appreciation now in the medical school application process for people who have a different background,” she says. “I remember being nervous that I wouldn’t get into schools because I had such a nontraditional path. But I think if you really know why you want to be a physician, and you’ve done the work for your post-bac classes and the MCAT, the world of medicine is just as open to you as to someone who was pre-med from the start.”

McDevitt’s job at the Irvine headquarters of Blizzard Entertainment, creator of the video games “Overwatch” and “World of Warcraft,” is to seek out partnerships, particularly with traditional sports organizations.

He’s certainly well connected: McDevitt worked for the Los Angeles Lakers for eight years as director of community relations after majoring in English at Pomona and earning a J.D. from L.A.’s Loyola Law School while working in the financial industry.

Let’s get one thing out of the way: Does McDevitt spend part of his workday with his gaze on a screen and his hands on a controller?

Amid the rapid growth of esports – video games as competitive sports viewed both online and at major events that fill sports arenas and offer millions in prizes – McDevitt is working to land deals with advertisers and sports organizations. He even is having conversations with the NCAA, as colleges like UC Irvine begin offering esports scholarships.

“In the same way that there is a robust, multibillion-dollar traditional collegiate sports market with March Madness in basketball and the whole college football world, we too see an opportunity for that in the collegiate space,” McDevitt says. “We have recently reached a deal with ESPN to host the collegiate championship for four of our game titles at a national championship event in Houston. We are just scratching the surface.”

His involvement in professional sports began on a lark.

“Upon graduating from Pomona, I thought to myself, ‘OK, what’s the most fun job you can have?’ And that was working for the Phoenix Suns, my hometown basketball team,” McDevitt says. “So I went to their website and looked for jobs, and it pushed me to a job-search service for professional sports.”

McDevitt created a profile and basically forgot about it until he was studying for the bar exam and got a notification about the Lakers job. He applied that night. By the time McDevitt learned he had passed the California bar exam, he was working alongside Kobe Bryant.

“It was so, so, so fulfilling,” says McDevitt, adding that his many volunteer experiences while at Pomona helped land the position. “I would on a weekly basis have the opportunity to provide a person – whether that’s a sick child or a kid who has received an incentive for a reading program or a parent or just a regular fan – I would be able to be part of an interaction between them and the team. And they would turn to me and say, ‘This is the greatest thing that has ever happened to me.’ Even if you’re just the messenger, that is really, really powerful.”

Growing up in Calexico, a California border town, Velarde hadn’t seen much of the wider world. “I didn’t know anything about sushi or Thai food, just nothing,” he says.

“I wanted to be a math major and music minor. I think I wanted to be a high school teacher, and that totally changed. Probably my biggest influence was [professor] Miguel Tinker Salas. I blame him for me becoming a union organizer, for my lefty politics for sure,” Velarde says with a laugh.

On campus, he became involved in United Students Against Sweatshops, a group that campaigns for workers’ organizing rights, fair contracts and living-wage policies. He also did an externship with the United Farm Workers (UFW). In addition, he helped organize campus volunteers to help marshal the picket line in a union-organizing effort at an area hospital. That led to a job with SEIU, the Service Employees International Union, organizing hospitals. Before that, he worked for the union now known as Unite Here in hotels as a “salt,” working undercover waiting tables alongside employees the union was seeking to organize. Oftentimes, workers in those settings are Spanish-speaking and working hard to improve their socioeconomic prospects.

“I just thought I was going to join the revolution,” Velarde says with a laugh. “I followed my passion and it ended up paying well, actually: They're good union jobs with full benefits.”

As time went on, Velarde became frustrated by a series of Supreme Court decisions that weakened unions, including Harris v. Quinn in 2014 and since followed by Janus v. AFSCME in 2018. He decided the battle was being fought in courtrooms. He applied to law school and was awarded a full ride, winning the UC Irvine School of Law Public Service Scholarship for students dedicated to a career in public-interest law.

He is graduating from law school in May and preparing to take the bar exam this summer.

“I'm looking to apply to union-side labor law firms,” he says. “So for me, it's a continuation of the labor work.

“Pomona made me very proud of being Latino in a way that I wasn't before. I felt like I had these tools now, and I felt the need to further my community.”