Four Marine Corps Veterans to Graduate from Pomona this Year 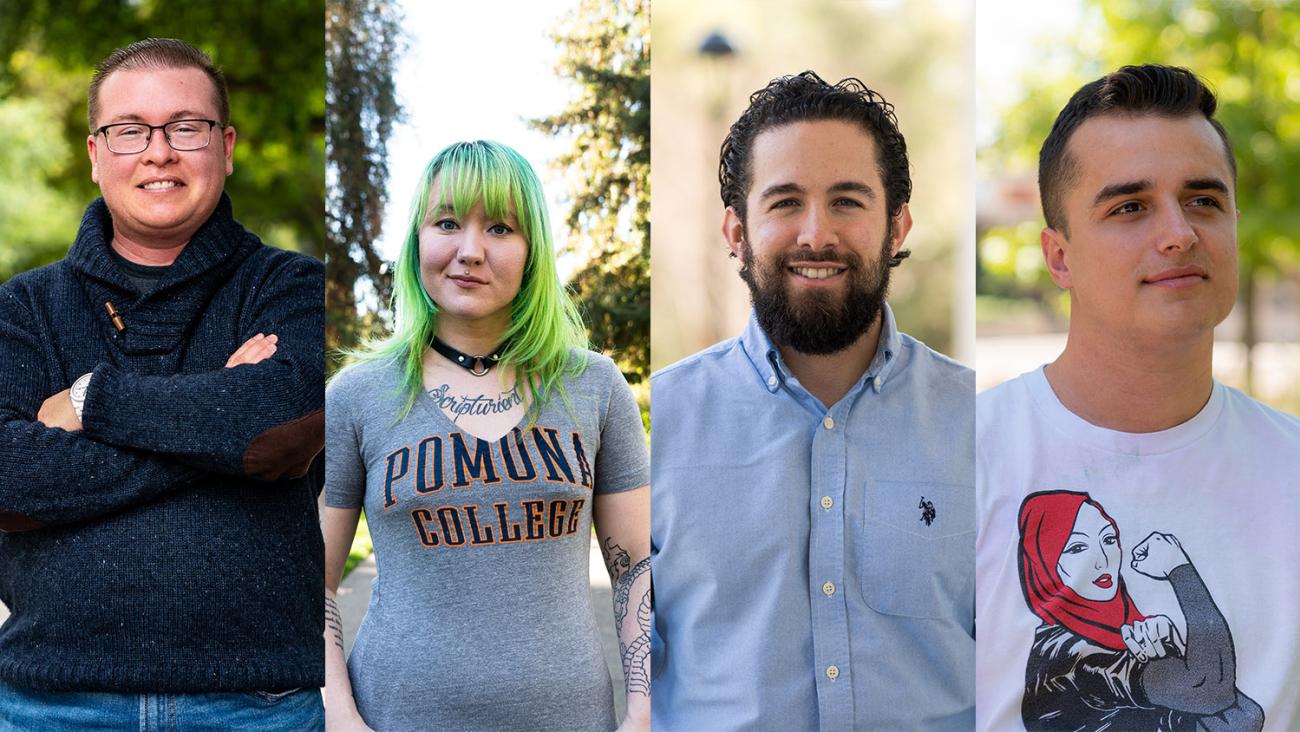 Veterans Shandra Dyess ’19, Mo Dyson ’19, Jordan Petersen ’19 and Chris Vazquez ’19 will add another title to their resume this year: Pomona College graduates. With plans ranging from becoming a doctor to advocating for fellow veterans, these Sagehens, who all served in the U.S. Marines, are getting ready to continue making their mark outside of Pomona’s gates.

The creativity of Shandra Dyess ’19 has flourished throughout her time at Pomona. The anthropology major is also an artist, writer and freelance photographer.

She raves about the breadth of classes she was able to take at Pomona and The Claremont Colleges.

“Logic with Professor Peter Fan-Ming Kung was challenging, but rewarding, and the same goes for the Latin courses I took, especially translating parts of the Aeneid,” says Dyess. “Well-Being and Autonomy with Professor Julie Tannenbaum is a must-take class for anyone wanting to learn more about personal philosophies. I learned that I have a pretty Kantian outlook, and I try to keep my personal philosophy in mind when I act now. I enjoyed all of my linguistics courses, especially the three I took with Professor Robin Melnick. Quantitative Linguistics is tough, but his sense of humor helped me get through.”

Dyess has also kept up with her writing. The former combat correspondent in the U.S. Marines included some personal narrative and a more traditional thesis format for her senior project. In her free time, she finished a novella she’s rewritten four times since she was 16 and is working on publishing.

She has also dedicated herself to her painting. Dyess joined a local art collective and took part in a few Claremont Art Walks in the neighboring Claremont Village. Working mostly in oils, she has started getting commissions and selling her prints. “I’ve been painting for 17 years and it feels a bit strange to sell pieces, but I’m managing.”

What surprised Dyess the most about her college experience is how incredible her young classmates are.

“So many of my age peers complain about young adults, those who are of traditional college age,” says Dyess. “I get to see a different perspective. I see people who want to take personal responsibility for instituting change in the world. They want to share what they’ve been given, and they want to clean up the world around them. That’s a privilege to share in.”

When Marine Corps veteran Mo Dyson ’19 entered Pomona, he was looking for a major that would expose him to aspects of the law and to policymakers in the legislative branch. Given his frustrating experience with the Department of Veterans Affairs, Dyson’s goal was to become an advocate for veterans by creating access to the benefits they had earned through military service. Those experiences, along with his service-driven mindset, led him to the Public Policy Analysis Program (PPA) at Pomona.

In addition to his PPA classes, Dyson chose educational opportunities and internships that taught him about legislative analysis, policymaking, and how the law is shaped by precedent, projected outcomes, politics and the desires of various constituencies.

At the recommendation of a PPA classmate, Dyson applied for a PCIP Summer Experience grant to work at the district office of U.S. Rep. Seth Moulton in Salem, Massachusetts. Moulton, also a veteran of the Marine Corps, serves on the House Armed Services Committee. Much of his legislative work has substantially improved the quality of care and access to benefits for Bay State veterans.

While working as an intern for Rep. Moulton, Dyson was brought onto a project with the Greater Boston Veterans’ Coalition that aimed to restore honor to veterans dishonorably discharged under the 1993 Don’t Ask, Don’t Tell (DADT) policy. Although DADT was seen as a political compromise at the time it was signed, LGBTQ service-members had to remain closeted or face expulsion and the equivalent of a felony on their military service record.

A veteran with a discharge under DADT forfeited all healthcare, education and employment benefits that other veterans with nonpunitive discharges were eligible to receive from the Department of Veterans Affairs. Dyson saw an opportunity for policy reform and inspired by his internship, he explored this topic for his thesis.

“For my thesis, I’m studying the Board of Corrections of Military Records. This is the last administrative stop for anyone to correct their record or to get their discharge upgraded,” says Dyson. “The board operates by due process, also known as service on a case by case basis; it’s the most fair, yet least efficient way to resolve legal issues.”

“Pomona’s Public Policy Analysis Program is very hands on,” says Dyson. “Students are encouraged to work on real-world problems, and that was highly attractive to me. Through my internship, archival research and several in-depth interviews, I was able to craft a thesis that is both reflective of my studies at Pomona, and indicative of my advocacy work, going forward.”

A transfer student from Mt. San Antonio College, Petersen credits his military service for pointing him to an academic path. His recruiter suggested he should become a linguist, so Petersen spent the early part of his military contract learning Mandarin Chinese at the Defense Language Institute in Monterey, California, where he earned an associate degree and received several awards for his performance both in and out of the classroom.

“I perform best when I'm being challenged,” says Petersen. “That’s why I’m here. I knew Pomona would really challenge me academically.”

Petersen has always been curious about how people think, which drew him to study neuroscience. “The field of neuroscience is constantly working to explain the ‘why’ behind diseases such as Alzheimer’s, depression and PTSD [post-traumatic stress disorder] and that’s something I feel is really worth trying to understand further.”

While Petersen was on active duty, he  saw  the damaging effects that PTSD had on many fellow veterans. By the time Petersen finished his contract without serving on a combat deployment, he felt a strange type of guilt that a lot of service members experience today. With his newfound passion for neuroscience, he has become interested in researching issues dealing with veterans with traumatic brain injuries and PTSD.

Giving back is also part of Petersen’s DNA. While a Marine, Petersen signed up to be a bone marrow donor, thinking that he wouldn’t get a call back. Fast forward a few years and not only has he been matched to multiple people, he has also had the opportunity to successfully donate to a patient in need.

What’s in store for Petersen’s future? “I am for sure taking a year off to support my wife's new career as a Captain in the United States Army Veterinary Corps,” he says. “After her yearlong training cycle, I will consider looking at graduate school opportunities.”

For now, he will enjoy his graduation and then celebrate his wife as she receives her doctorate in veterinary medicine only four days later.

In the military, Chris Vazquez ’19 was a reconnaissance Marine who gathered intelligence on foot-mobile clandestine missions beyond enemy lines and jumped out of airplanes — the type of “cool stuff you do in video games.”

As a molecular biology major, Vazquez has traded clandestine missions for hours of research in the lab where he studies the process of embryo development in roundworms with Biology Professor Sara Olson.

When Vazquez started taking science classes at community college, he felt like the environment wasn’t challenging or interactive.

“My enjoyment of learning science wasn’t quite there when I first transferred,” says Vazquez. “But, during my time at Pomona I was able to take classes from professors who are unbelievable and really make you fall in love with the subject. I have a greater understanding of science compared to when I arrived.”

“The way Professor Olson conveys information – tough, complex subjects she just puts in a bundle that is easy to understand,” says Vazquez. “The same for Professor Daniel O’Leary in chemistry. I would say professors’ abilities at Pomona to take such complex concepts and break them down so it’s easy to understand–it’s been incredible to witness.”

Vazquez admits that the transition from the military to a civilian life was tough. “You’ve been living a certain lifestyle, with structure and discipline where you face challenges and obstacles every day,” says Vazquez. “For me, taking a difficult class is my new obstacle. That’s the biggest similarity of college and military life. Finding new challenges to overcome.”

Vazquez newest challenge: medical school. He has a few more classes to take in the fall semester to finish up his degree and is starting to apply to medical schools in Florida. In preparation for this process, he will attend the University of Miami this summer for a seven-week mini medical school experience. Known as the Motivation Program, this experience will allow Vazquez to receive classroom instruction, shadow physicians and develop necessary skills to be competitive in his preparation to medical school.

“I found out about the Motivation Program through [Chicano Latino Student Affairs] Dean Tony Jimenez,” says Vazquez. “I’d never heard of the program and I had a few days to get my application ready. That’s another great thing about the professors here, I was able to get letters of recommendation in a short time and submit my application in time. I wouldn’t have been able to do that at a bigger institution.”

Onetta Brooks '74, past president of the Alumni Association Board
END_OF_DOCUMENT_TOKEN_TO_BE_REPLACED
© 2020 Pomona College