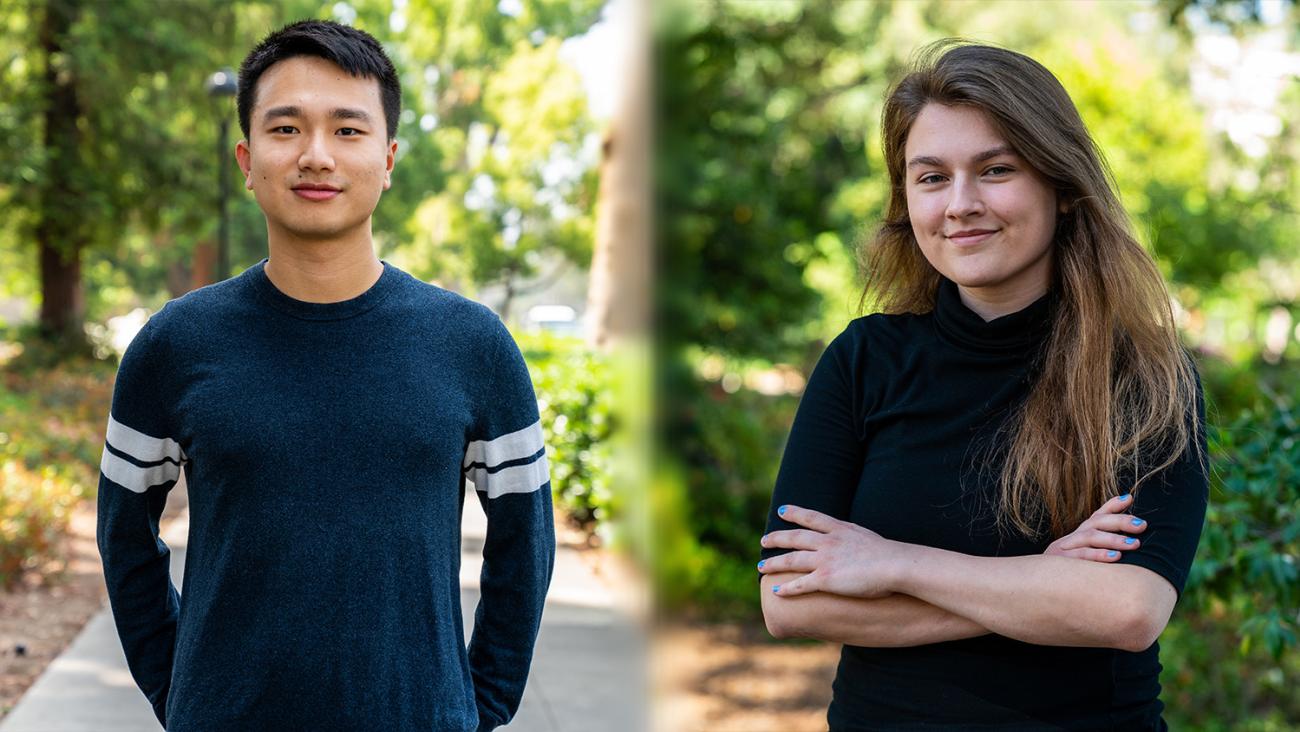 The Downing Scholarship award covers tuition, fees, living expenses and round-trip travel, as well as a stipend for books, local travel and personal expenses. The program is a special arrangement between Pomona and the University of Cambridge’s Downing College.

Pitts, an English major while at Pomona, will pursue a master of philosophy in medieval and renaissance literature.

Her research project at Downing, “‘Seeing Better’: Uncloaking in the Lais of Marie de France,” will examine a particular attempt at revelation that recurs throughout a series of 12 poems from the 12th-century poet Marie de France.

“I look at Marie as a kind of archivist: She equivocates her desire to ‘archive’ the narrative poems with the need to ‘show herself’ (‘se montrer’),” says Pitts. “I argue that the women of her tales re-enact this impulse by way of uncloaking; time and time again, they remove their mantles, and, by way of their exposed bodies, enact some fundamental narrative shift that ensures the tale’s movement forward.”

Pitts is excited about the paleography component of her Cambridge course and about having access to Cambridge’s Centre for Material Texts. “I’ve worked a lot with archival theory but haven’t had as much hands-on experience as I would like, and I’m hoping my time at Cambridge’s archives will remedy that,” she says.

During her time at Pomona, Pitts undertook a research project on author Geoffrey Chaucer, paying specific attention to the language of legal procedure in The Canterbury Tales and the way that literate culture influenced testimonial practices. As she studied methods of rendering orally-transmitted speech textually, she became interested in material culture, looking particularly at the way that concepts of embodiment could be applied to the transcription and preservation of manuscripts. She will be extending her work on the practice and theory of archiving text though her Downing scholarship.

“After Cambridge, I plan to pursue a Ph.D. in English, and then, because I’m interested in becoming an archivist, a master’s in library science,” says Pitts. “I hope to become an archivist specializing in materials from the Middle Ages.”

Xuan, a recent graduate of Pomona’s physics program, will pursue a master of philosophy degree in astronomy. He plans to study the evolution of exocomets – the extrasolar equivalents of solar system comets – and their impact on exoplanets with a theoretical approach.

“My goal is to realistically model extrasolar comets, icy bodies in other planetary systems, and determine their abundances in a few systems where we observe them,” says Xuan. “Despite their small sizes, comets have important implications for the prospects for life on planets. If a planet sustains too many cometary impacts, its atmosphere might get removed. On the other hand, comets can deliver water to planets and enable the development life, just like we think they did on Earth.”

The Chinese-Canadian native gained significant research experiences during his summers as an undergraduate student.

“Before my first summer at Pomona, I got in touch with a Caltech professor through a cold email but was hesitant to apply,” remembers Xuan. “Thankfully, my Pomona advisor Professor Philip Choi was there to encourage me, and I pursued the opportunity. I ended up getting the research project and working all three summers at Caltech. With the guidance of mentors and friends at Caltech, I engaged in interesting and rewarding projects on several aspects of exoplanets.”

After Cambridge, Xuan will return to Pasadena, where he’ll start his Ph.D. in astronomy at Caltech. During his career, he hopes to contribute to the quest of discovering life beyond Earth by leading research collaborations and advising students as a professor at a research university.

“The implications of extraterrestrial life go beyond astronomy and transform human knowledge as such, in a way that is reminiscent of the Copernican Revolution,” says Xuan. “I think we can use this knowledge for the betterment of humanity.”