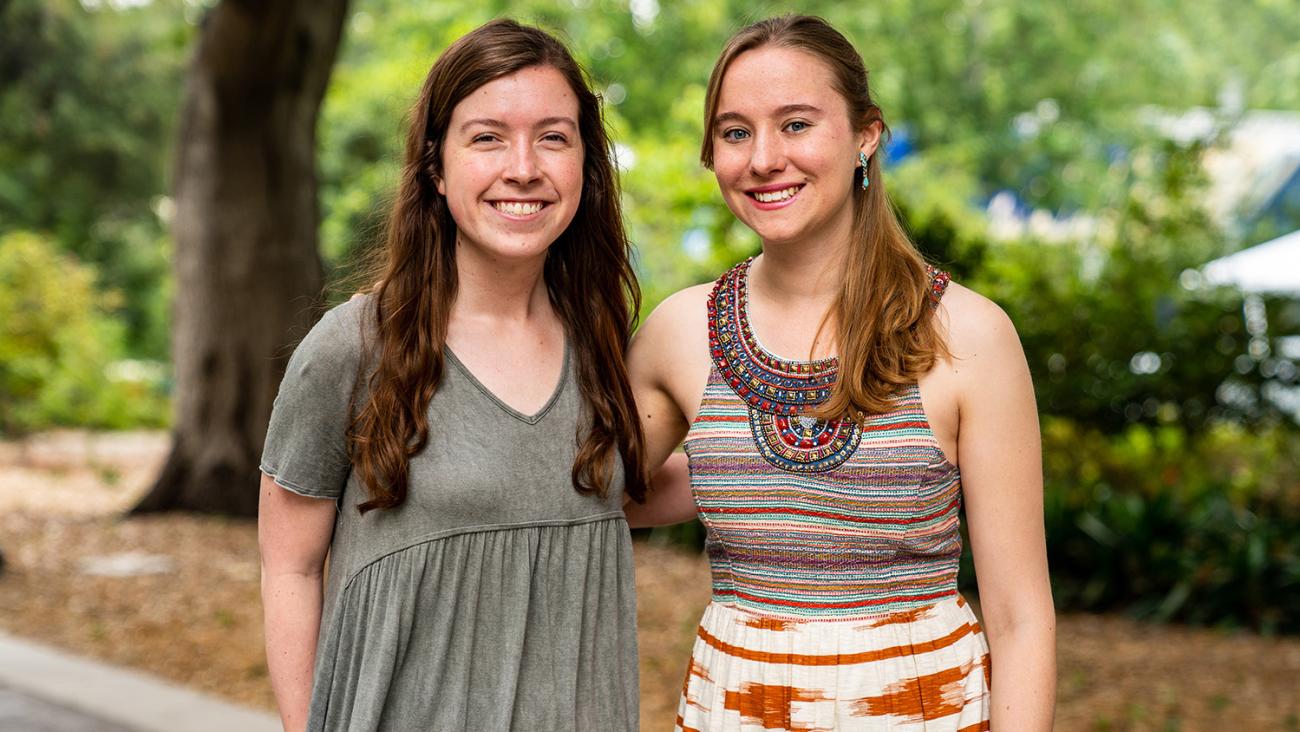 A mere three years at Pomona have taken Christina Beck ’20 and Elise Koskelo ’20 far down the path to becoming scientists. In recognition of their quests thus far they have each been awarded a Barry M. Goldwater Scholarship, which provides $7,500 per year for educational expenses to college sophomores and juniors who intend to pursue careers in mathematics, the natural sciences or engineering.

Beck, who is from Austin, Texas, is a molecular biology major who plans to pursue a Ph.D. in either that field or chemistry and have a career in academia.

During her first year at Pomona, Beck began working closely with Chemistry Professor Jane Liu and continues to work on that same project with her. In their research they are seeking to understand exactly how V. cholerae, the bacteria responsible for cholera disease, regulates its metabolism in the presence of different carbon sources (V. cholerae survives in two environments: aquatic reservoirs and the human gut). Beck also did research last year while she studied abroad at University College London and hopes to study the human microbiome in the future.

Beck has been a student mentor for both general chemistry and organic chemistry courses. When it comes to her own mentors at Pomona, she says Liu has been invaluable.

“I feel really lucky to have her as a research adviser, teacher and mentor alike. The experiences I have had in her lab are largely what drove me to pursue a research career, and her continuous support, both inside and outside of the lab, has really shaped my time here.”

“As much as research is about the science itself, it’s inherently shaped by the people you’re doing that science with,” says Beck.

Koskelo, whose hometown is Los Alamos, New Mexico, is double majoring in physics and math. Once Koskelo graduates from Pomona, she hopes to do a research fellowship abroad and go on to earn a Ph.D. in physics and become a college professor — with an aim to eventually serve as a scientific advisor for the United Nations.

Koskelo is working on an interdisciplinary project with Professor of Physics Janice Hudgings, devising a mathematical model of the noise involved in the thermal imaging measurement process. Last summer she conducted a Summer Undergraduate Research Program (SURP) project on molecular spectroscopy with Physics Professor Richard Mawhorter in Hanover, Germany. This summer she will be working on atmospheric physics research with the National Oceanic and Atmospheric Administration’s Earth System Research Laboratory in Boulder, Colorado, studying cloud formation in the Arctic. In the future she hopes to do physics research that is both theoretical and computational and that combines her interests in quantum mechanics and machine learning.

Koskelo’s love for physics and teaching is evident in her extracurricular activities, which include serving as a mentor and TA in the physics and math departments and being president of Pomona’s chapter of the Society of Physics Students and the club, Awesome Ladies in Physics and Astronomy (ALPhA). On summer and winter breaks, she works at the Engineering Institute at Los Alamos National Laboratory, something she has done since high school.

Koskelo says Hudgings has been instrumental in propelling her toward a career as a research scientist.

“[Hudgings] has been highly invested in my learning through the research process, often willing to spend significant amounts of time mulling over difficult questions about the model of measurement noise and experiments that we are working on,” says Koskelo.

Taking the course Spacetime, Quanta and Entropy with Professor Thomas Moore her first year may have lit the flame when she came to Pomona. Koskelo says the class was a phenomenal experience: brand new, challenging and engaging.

“I felt confident in pursuing physics as a major because Professor Moore announced to the entire classroom, that any student in the room ‘could be a physicist,’” Koskelo says.

Onetta Brooks '74, past president of the Alumni Association Board
END_OF_DOCUMENT_TOKEN_TO_BE_REPLACED
© 2020 Pomona College