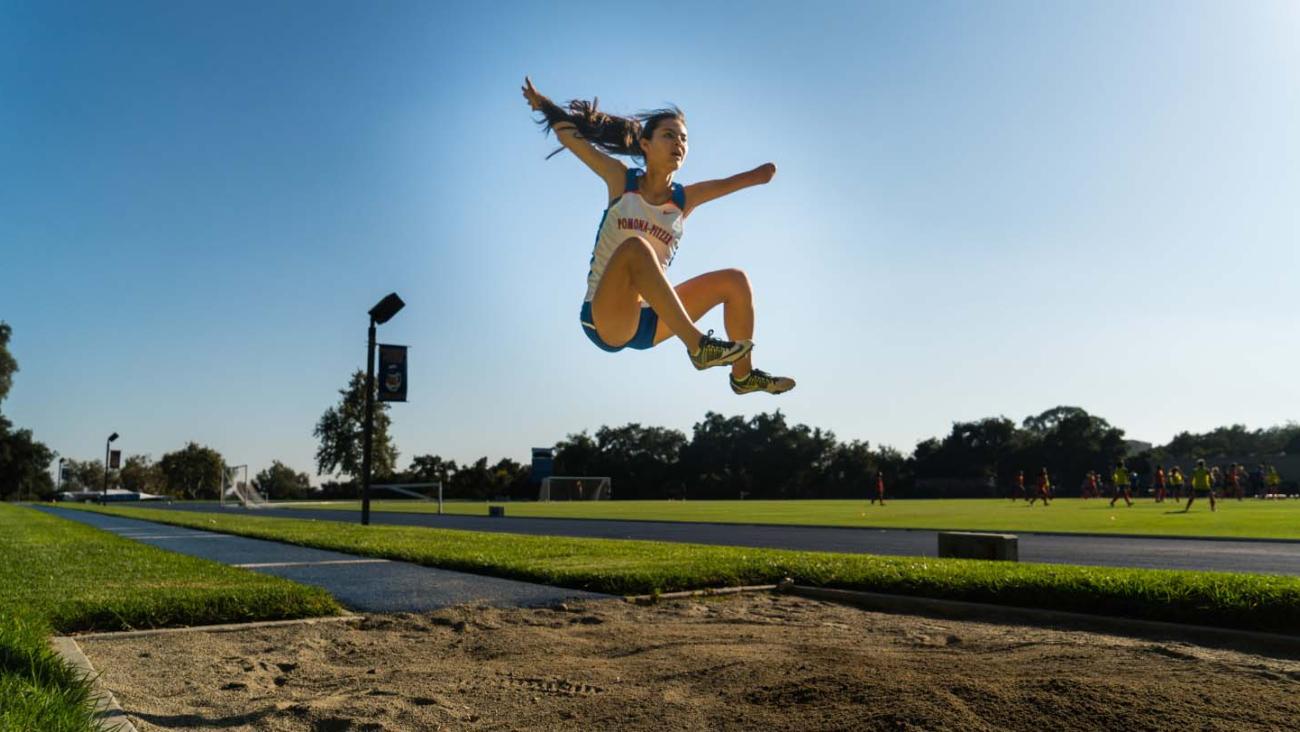 Amy Watt ’20 landed in Peru on Tuesday evening – a week before fall semester classes begin at Pomona College. Watt, a Sagehen track and field athlete, is competing in the 2019 Parapan American Games, where Paralympic athletes from 33 nations from the Americas will be competing from Aug. 23 to Sept. 1 in Lima, the Peruvian capital.

She will compete in the long jump on Aug. 24 in the T47 classification, which is for athletes with an upper limb impairment. Watt, who holds dual citizenship in Canada and the United States, is representing Canada.

“We are so proud of Amy!” says Kirk Reynolds, professor of physical education and women’s track and field and cross-country coach. “She is a terrific athlete for our team, so to see her be able to compete on a world level is very exciting. She works so diligently on her training and continues to make strong improvements. I can’t wait to see her results from this meet!”

This is hardly Watt’s first international meet. To list a few: In 2016, she competed for the U.S. in the Rio Paralympic Games, where she came in sixth in the 400 meters and in the long jump. Competing for the U.S. in the 2015 Parapan American Games in Toronto, she finished fourth in the 100-meter and 200-meter events.

Watt’s auspicious start at Pomona College three years ago is still fresh in her mind. “When I went to Rio, all my professors were really supportive: All my classes were recorded, and they were all very communicative over email.” Watt missed the first two weeks of classes while competing in Brazil as part of Team USA.

“After I competed in Rio, I didn’t do any Paralympic competitions for three years, but I have been competing with the school team at Pomona. I love being on the track team at school, the coaching team has been great, especially in adaptations for drills that I have to do. For this meet, they have been extremely supportive.” Watt has been receiving training plans and feedback on videos she sends to Assistant Track and Field Coach Ryan Sanders.

Watt has not only found athletic success; she also thrives academically and is forging her career plans post-Pomona. A double major in molecular biology and mathematics, the Palo Alto native has kept busy as a department liaison for molecular biology during her junior year and a chemistry liaison her sophomore year, and as a course mentor. She also has spent two summers interning at Facebook as a data scientist. Watt is also very involved with Claremont Challah, an on-campus club that bakes fresh challah bread weekly to raise funds which are donated to worthy causes at the end of each semester.

“I’ve loved my classes at Pomona. My junior year, I was taking a lot of upper division courses that I found very interesting,” says Watt. “I’ve loved everything Pomona has, especially the opportunities in and outside of class.”

Last April, Watt was part of a team of Pomona College mathematics students who were awarded the Best Use of External Data prize at the American Statistical Association (ASA) DataFest at UCLA.

Watt is currently contemplating what she will do after graduating from Pomona in May. With an offer to return to Facebook full time, Watt hasn’t ruled out graduate school.  “I have to decide if I want to stay in tech, work in a field that combines my interests in math and biology or explore my options with graduate school.”