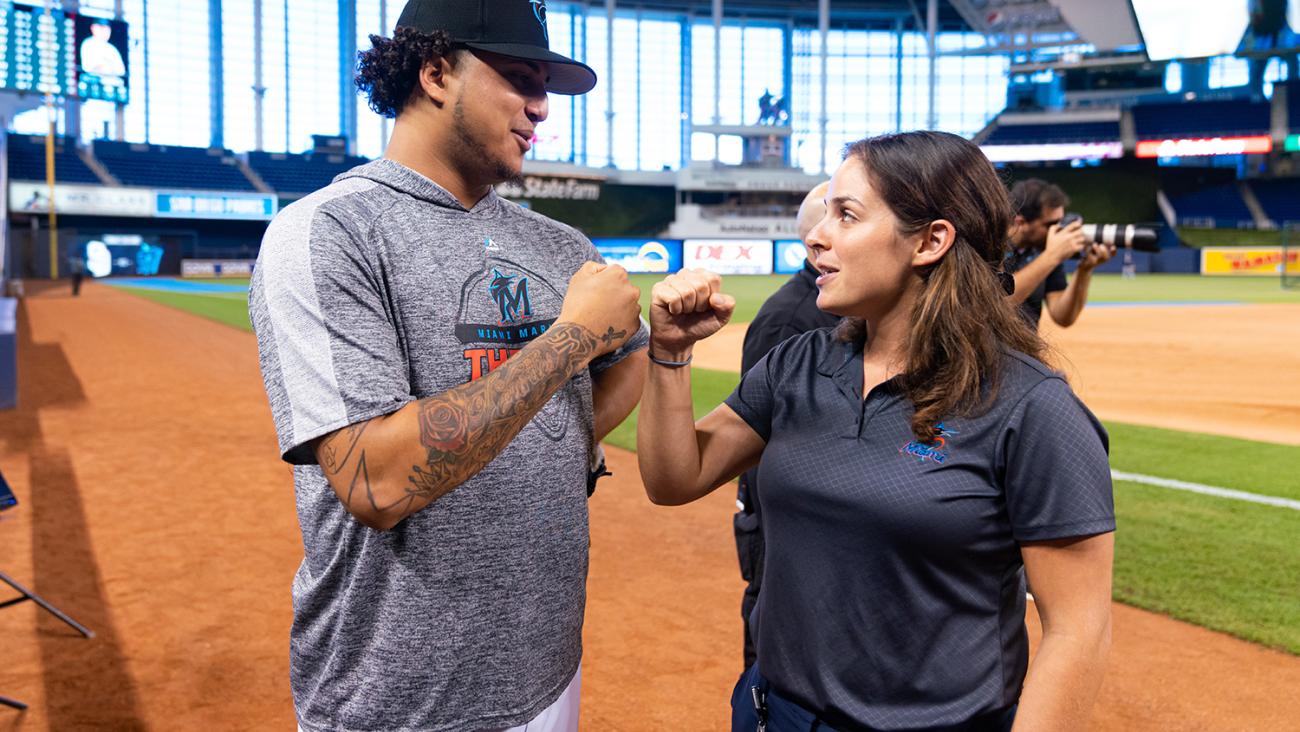 Walk through the Miami Marlins clubhouse and there’s a chance you’ll hear a Spanish phrase common in the Dominican Republic: “¿Qué lo que?”

Thanks to an innovative education program led by Emily Glass ’15, that might be an English-speaking player engaging in Spanish banter that roughly translates as “What’s up?” You’re as likely to hear Latin American players greeting their U.S.-born teammates in English.

The Marlins are trying to become the first bilingual organization in Major League Baseball with an effort that not only offers English instruction to Latin American players chasing a dream in the minors, but also teaches Spanish to U.S.-born players and an executive team led by Derek Jeter, the future Hall of Famer who serves as CEO.

“We're teaching English to our international players and Spanish to our domestic players, but then also life skills, from financial planning to cooking classes,” says Glass, whose work as the Marlins’ first education coordinator has been featured in the New York Times and Washington Post, particularly for her focus on teaching Spanish. “The philosophy behind that is we live in a globalized world, and Miami is at the center of that,” Glass says.

More than a quarter of the players on Major League Baseball rosters at the beginning of this season were born outside the U.S., with a record 102 from the Dominican Republic, 68 from Venezuela and 19 from Cuba. In Miami and some other cities, many of the fans are Spanish-speaking too.

“Our stadium is in Little Havana, so it's in a neighborhood where everybody speaks Spanish,” Glass says. “So we want to give our players and all of our front-office employees the ability to interact with our fans that come to the ballpark and with the community, in both Spanish and English.”

Finding Her Path from Pomona

Working for a Major League Baseball team can be glamorous, and Glass can occasionally be seen bumping fists with major leaguers on the field before a game. But the former Pomona-Pitzer softball player’s schedule is demanding. She spends at least a month each winter in the Dominican Republic and much of the season on the road visiting Marlins minor league players on teams like the Batavia Muckdogs, the New Orleans Baby Cakes and the Jacksonville Jumbo Shrimp.

Though her path to the big leagues has been winding, Glass has been preparing for this work since she stepped onto the Pomona College campus, and even before. She played baseball with her brother on youth teams until she was a teenager, then switched to softball for high school and college. She started every game for the Sagehens her first season at either catcher or third base, batting .386. But Glass would play only one more season of softball before competing campus interests and a love for hardball led her to recreational baseball with the guys in what she euphemistically calls a “carbonated-beverage league.”

Even her first-year Critical Inquiry seminar at Pomona, or ID1 as it’s known, drew Glass closer to the game. She took Baseball in America with Lorn Foster, now an emeritus politics professor who became such a close mentor that the two still have a standing phone call each Sunday at 3 p.m.

“She was a very gifted writer—that’s first and foremost,” Foster says. “But her interest in baseball was abiding.”

Glass later served as a teaching assistant for Foster’s class, and honed her high school and college Spanish while studying abroad in Salamanca, Spain. When it came time to write her senior thesis for a degree in public policy analysis, she worked with Foster and Professor David Menefee-Libey and again chose baseball as her topic: She delved into a renowned program for disadvantaged youth called Reviving Baseball in the Inner City (RBI) that was founded by former major league player John Young in Los Angeles in 1989. Her introduction to Young, then nearing the end of his life, came from Foster’s first cousin.

Glass also won a coveted Watson Fellowship, which provides a stipend of more than $30,000 for a graduating senior to engage in a year of independent study and travel abroad. Glass conducted research on international baseball while traveling to seven countries, including the Dominican Republic, Australia and Japan, where she coached Little League on a field onto which she believes only one other woman had ever stepped. There, she faced language and cultural barriers and “just baffled confusion from some people of ‘Why are you here?’”

In the Dominican Republic, Glass landed an internship with Major League Baseball in the impoverished yet talent-rich country where all 30 MLB teams have youth academies, focusing on player development and education. Her path still wasn’t straight after her travels, as she reached the final round of interviews for a position as an assistant of baseball operations with the New York Yankees but didn’t get the job. She then worked as the assistant for the chief sales officer for a company called Acme Smoked Fish in Brooklyn for a year and a half before realizing, “I want to work in baseball. I don't want to work in smoked fish.”

Back home in California as she tried to find the right job in baseball, Glass began to consider law school or graduate school. Baseball isn’t a field like consulting where companies are out looking for young graduates.

“Going to Pomona, you want to know exactly what you're doing next when you graduate, but there are a lot of industries and worlds where you need to be persistent and patient,” Glass says. “My dad had always said to me that it takes six months to get the job that you want. But if you try for six months and you put in the time and you trust the process, it will work out. And that's what it took, six months of informational interviews and making connections and reconnecting with people.”

Mayu Fielding, a woman from Venezuela who is the education coordinator for the Pittsburgh Pirates, became a mentor and referred Glass to multiple teams. Glass made it to the final round for a job with the New York Mets, interviewed with the Toronto Blue Jays and the Cincinnati Reds, and for a while taught skiing in Northern California. Finally, the Marlins called, and Gary Denbo, the organization’s vice president of player development and scouting, gave her the only chance she needed.

“I never would have gotten here without a variety of mentors,” Glass says.

An Education Beyond the Field

The shared language of baseball often starts with pitches. Recta for straight fastball, curva for curveball, cambio for changeup. For catchers and pitchers in particular, it’s important that nothing is lost in translation.

Nick Fortes, a catcher drafted in 2018 who is trying to move up the minor league ranks, recognized that quickly. When his first season was over, he moved to Jupiter, the town north of Miami where the Marlins’ education office and player development system are based, along with two of the organization’s minor league clubs and the home for the major league team’s spring training camp.

“He spent the whole offseason taking Spanish classes with myself and some of our amazing team of teachers,” Glass says. “Baseball is a game of inches, whether something is a ball or a strike or fair or foul, and our players see that by being able to communicate and be on the same page as some of their teammates, everything works better.”

Her mission might be most crucial with Spanish-speaking teenagers at the Dominican academy or just starting minor league careers, many of them trying to break free of poverty and provide for their families. Landing in the hinterlands of the American minor leagues with no English isn’t easy.

“A lot of our players we sign at 18 or 20 years old, they've never cooked meals for themselves,” says Glass, who hires teachers to work with various Marlins teams in classes limited to 12 students—a hat tip to her small-class experiences at Pomona. She also shapes the curriculum, part of which is also delivered by mobile phone or online.

“All of it truly is encompassed in service in the highest sense of the word—the skills they are going to need when they're in a rookie league making very little money and trying to support themselves,” she says. “So we really tailor things towards interview skills and towards the off-field and money management skills—how to send money to your family abroad and how to communicate professionally at the field and away from the field.”

Jarlin Garcia, a 26-year-old Dominican pitcher now in the majors, remembers how challenging it was when the amount of English he spoke was nada.

“It’s a little bit hard, because you want to talk with the people, with the fans, and like when you’re out to eat,” he says in English, sitting in the visiting dugout at Dodger Stadium. “That’s why we need to learn.”

Beside him was Luis Dorante, a player relations and Spanish media relations liaison who works closely with Glass and travels with the major league team to translate when necessary.

Like Glass, he is cognizant of the importance of life skills.

“Some of these guys come from very humble places,” he says. “They have no idea what is a debit card, what is a credit card. Credit is difficult to explain. I say, ‘Son, be careful, you have to pay that later on.’”

Of course, only around 10 percent of minor league players ever reach the big leagues. And even for those who do, the money may not last forever.

“What we tell them is that many of these players won’t make it. Unfortunately, it’s a statistical fact,” Dorante says. “They need to enjoy this period in their life where they’re learning many skills and also gaining friends that might last for life.”

Onetta Brooks '74, past president of the Alumni Association Board
END_OF_DOCUMENT_TOKEN_TO_BE_REPLACED
© 2020 Pomona College