Beauty and the Brain: The Role of the Default Mode Network in Assessing Aesthetic Appeal 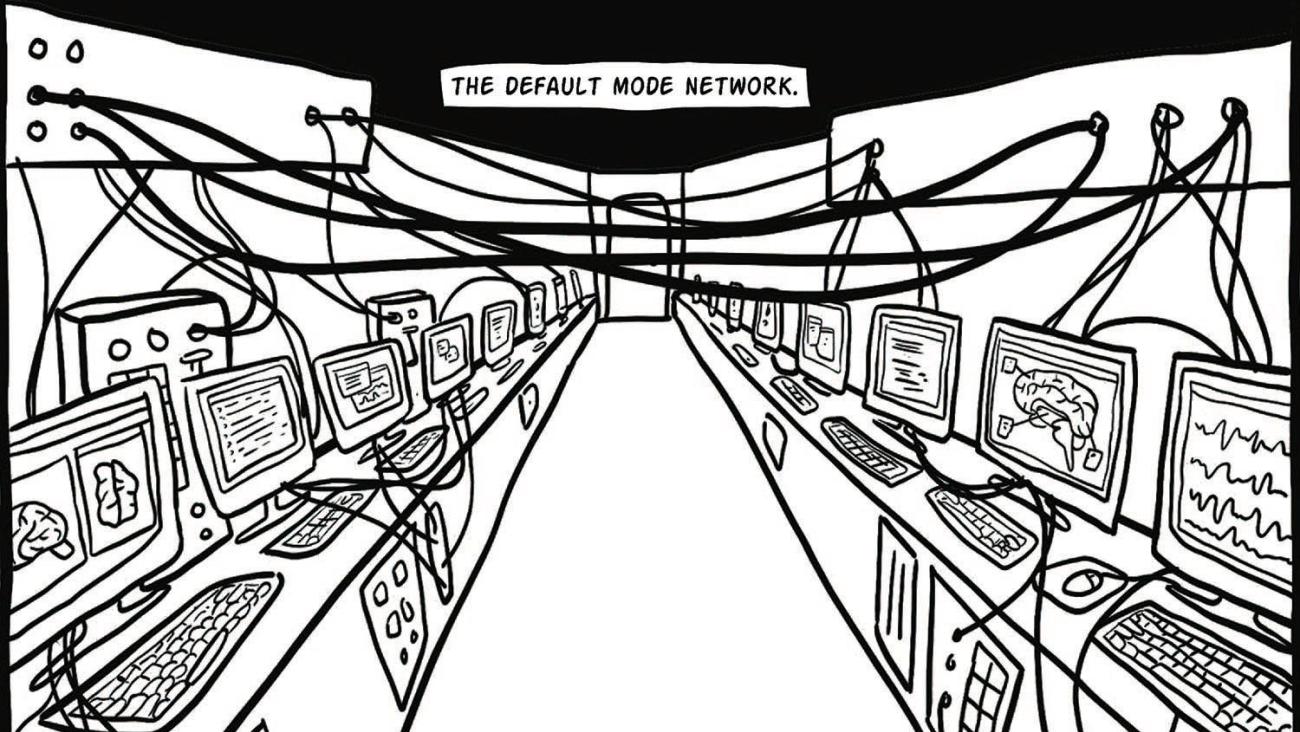 Story Date:
Illustration by Marilyn Perkins '19. This illustration is one of many from Perkins' senior thesis titled "The Creative Brain." Perkins worked with President Starr, among other faculty members, to explore neuroscience through science comics.

The default mode network, a group of interconnected regions in the brain typically functioning when the mind rests, also shows activity when presented with beautiful or meaningful visuals, according to a new study from researchers including Pomona College President G. Gabrielle Starr.

The article “The default mode network represents aesthetic appeal that generalizes across visual domains,”  appears in the Sept. 2 edition of the journal Proceedings of the National Academy of Sciences of the United States of America (PNAS), one of the most prestigious multidisciplinary scientific journals.

Edward Vessel, a research scientist at the Max Planck Institute for Empirical Aesthetics in Germany, is lead author of the study. His co-authors are Amy Belfi, assistant professor of psychological science at Missouri University of Science and Technology; Jonathan Stahl, graduate student at The Ohio State University; and President Starr.

The study looked closely at the brain, through the use of functional magnetic resonance imaging (fMRI) to measure brain activity, aiming to find neural correlates in order to see how people respond to visual representations of artwork, architecture and landscapes.

Starr and her co-researchers have found that when people respond in the most positive way to a work of art, it engages what is known as the default mode network. These are the regions of the brain that work together when we are in a resting state—self-reflection, mind-wandering, remembering, imagination—and then they decrease in activity, for the most part, when we perform external tasks.

In the following Q&A, President Starr shares more about the field of neuroaesthetics, her research in this academic area and the contributions of her latest study.

Why is it important to study aesthetic appeal through a neuroscience lens?

Aesthetic appeal is a fundamental aspect of human experiences that touches many aspects of life. Aesthetic considerations affect purchasing decisions, choice of leisure activities, stress levels, recovery time from illness and general well-being. Beauty also affects aspects of perception and cognition such as visual orienting, learning, valuation and it affects our interactions with other people such as evaluation of attractiveness and judgment of trustworthiness and competence.

It also tells us something about the opposite question. What happens when we don’t have the beautiful around us? The beautiful is doing something particular for us. So what happens when we strip all of that away? What happens in schools when all the art classes are taken away and all the walls are gray? And when the music goes away? That space suddenly means much less to you. Don’t we want our students, our children, to be in places that inspire them? There are some incipient connections we’re seeing by having things that you find beautiful around you and your ability to be creative. Don’t we want that? Creativity and predisposition toward art is one of the traits that make humans so unique, therefore neuroscientists want to study it.

Tell us about your most recent study.

The most recent piece that we did was motivated by the question: Is it with just visual art where these regions work together and the default mode network shows activity?

But what about architecture? Architecture is an art form and we should care about architecture because we spend a lot of our time determining the surroundings we live in and we want them to be nice. And faces, and landscapes, too? All of these things that we care about. So we did an experiment to see what we can understand behaviorally about those different experiences and different classes of objects.

What we found was that – one of the hallmarks of artwork is the amount of disagreement that people have about it. What you love, others might not. So there’s a lot of distance between people. With faces, people tend to agree. With outdoor landscapes, there’s more agreement than there is about art, but less than there is about faces. And then, exterior architecture, you suddenly get a drop in agreement. So, the way we interpret that, is that artifacts of human culture that scream this is a building made by people, are going to have less agreement about their beauty compared to a landscape such as the Grand Canyon. So, culture matters.

What made you focus your research on the default mode network?

We didn’t set out to study the default mode network at all. We were at a very early point of the history of neuroaesthetics and we first started getting data in 2004. There is a long history of scientists, going back to the 19thcentury, who studied music and different ways people approached design or figures. When we started doing work in neuroscience and aesthetics, the general focus was to look for a specific brain area that really supported, or that was able to perceive, the beautiful.

What we really wanted to do was to shift the conversation from “is there a region in the brain that serves our ability to perceive the beautiful?” and instead think of aesthetic experiences as more than beauty and ask a different question: “How much does it move you?”

And then we found something surprising. As we started doing the first set of analysis around 2006, my collaborators and I saw there was a lot of interest in networks in the brain, not just individual regions of the brain.

What shapes our views of beauty?

But how do we find similarities in what many perceive as beautiful? For example, there are only a few ways that human beings approach trees. For shade, for attractiveness, as landmarks, as sources of wood, for pieces of fruit, whatever it may be, trees in general mean the same to just about all people. There’s a greater shared interpretation of what a tree means. Not fully, but much greater shared interpretation of what a tree means, than say a painting of a tree. We also found that while there are distinctive regions that respond to faces, landscapes, exterior architecture, and to visual art, there is a shared code in the brain for what is beautiful. And that shared code is found in the default mode network. When it means something particular to you, the default mode network cares about it.

The other thing that was really interesting we found in that first study was that auditory regions were also depressed, which is really odd because you’re in a fMRI machine that is really loud. You were screening some things out because that visual you were looking at called out to you so much. As if you’re saying: “I don’t care about all that noise. I care about this.”

How does length of exposure affect the activity of the default mode network?

We started to wonder if we could learn more about this. We wanted to look at duration of exposure in one experiment. But that is hard because you need a certain number of similar episodes in order for the results to be statistically useful. So, we looked at varying lengths of exposure to an image in short, intermediate and long intervals—all of them being in seconds.

What’s next in your quest to study beauty?

I would love to work more on the word or poetry. Music and poetry are harder to work with because they’re longer duration and there’s a lot that goes on with words that doesn’t happen with visual images, and that’s something I need to learn more about.

I’m really excited about a future opportunity. I’ve had a conversation with a colleague here at Pomona, [Professor of Neuroscience and Psychological Science] Richard Lewis about the possibility of doing some experiments in the College’s Museum of Art. It’s one thing to see a visual in a computer screen, and it’s another thing to engage with an artwork all the different ways that you do when you can move up to it, you can get closer, you can move away.

I want to help better understand how even in a place that isn’t necessarily your thing or that you don’t find personally appealing, how might you still appreciate its special beauty and find a space that gives you a grounding. Beauty is not just “eye candy.” We should find beauty in what’s different. What I like is not going to be what you like. And maybe at some point you might be able to see my perspective. And that’s why we have education.