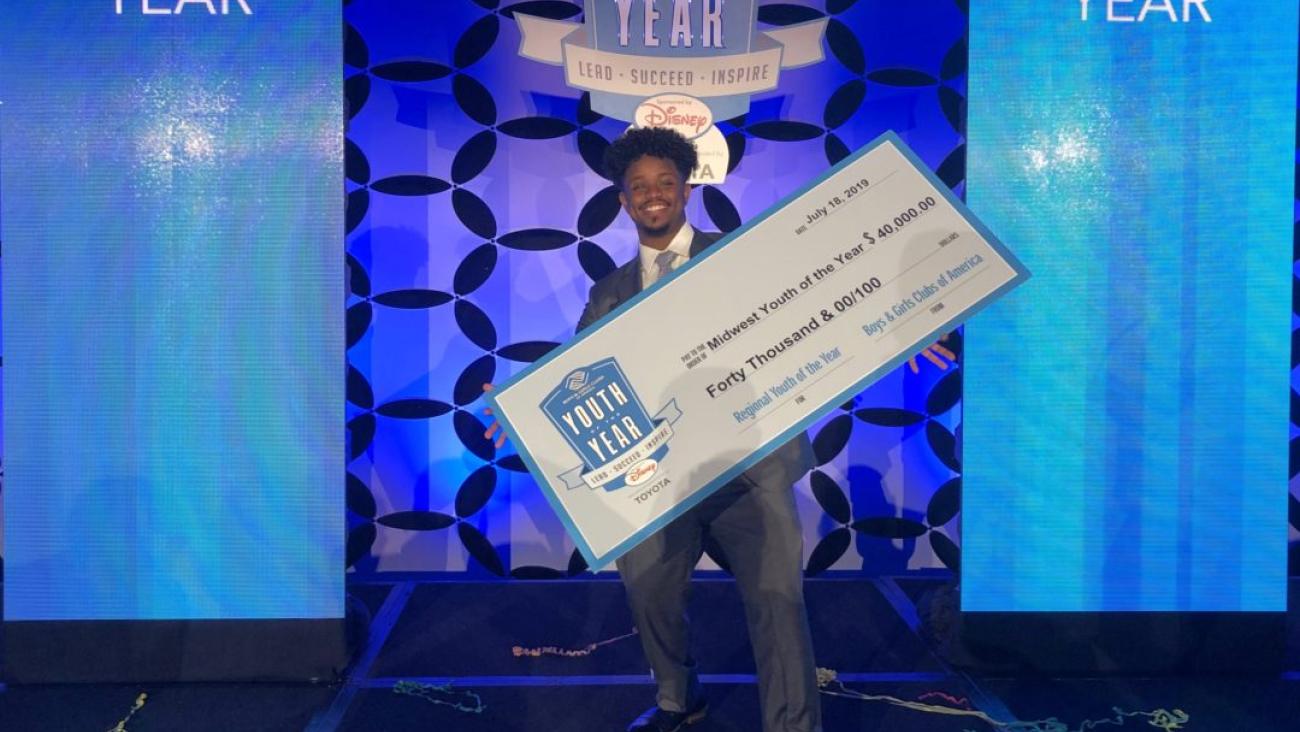 Story Date:
Anaa Jibicho '23 wins the 2019 BGCA Midwest Youth of the Year title and a $40,000 scholarship at the Boys & Girls Clubs of America (BGCA) celebration in Chicago.
Photo by:
Boys & Girls Club of the Twin Cities

Just a few weeks ago in July, first-year student Anaa Jibicho found himself on stage at a Boys & Girls Clubs of America (BGCA) celebration in Chicago accepting a very special award. Jibicho had just won the 2019 BGCA Midwest Youth of the Year title and a $40,000 scholarship.

The lit-up stage and the crowd’s warm applause could make any teenager nervous, but Jibicho has come a long way from the tentative youth who didn’t think there was anything interesting over at the Boys & Girls Club of the Twin Cities in St. Paul, Minnesota.

Today, Jibicho is starting his first semester at Pomona College where he plans to major in philosophy, politics and economics (PPE) to be able to solve problems in his community and abroad. One of those problems he wants to fix is one he experienced directly.

Last year, Jibicho co-founded Didomi, a company that sells reusable water bottles and donates a portion of the profits to water access projects and eliminating waste fields in developing countries.

The cause is dear to Jibicho’s heart – born in Ethiopia, Jibicho’s family made their way to Kenya to escape the ongoing persecution of the Oromo people. As a small child in Kenya, Jibicho remembers what it was like living without access to clean water and the effects of living near landfills. Didomi is his first passion project to help combat those problems.

After Jibicho’s family left Kenya for the United States, they settled into affordable housing in St. Paul, where a 6-year-old Jibicho struggled learning English and as a result, struggled in school. His parents, who didn’t know the language either, could not help him.

“My parents were happy that I was in America and that I was safe,” he says. “Coming from a country that wasn’t doing well, it was an upgrade and you don’t really realize the lack of resources. I was glad to be in this country but there were other problems like learning the language and adjusting to the culture. I was having a hard time in school… even though my parents were here, and we left a country together, I had to do this on my own. I was almost expelled from my district and even found myself in the back of some police cars.”

It took a police officer who went above and beyond to help steer Jibicho in another direction. “I didn’t have a shoulder to lean on until a police officer approached us – we had been playing soccer and he got us during halftime and we were too tired to run so we just stayed there… and he gave us a guest pass for the [Boys and Girls] Club that day and we decided to check it out.”

Once he started going regularly to the Boys & Girls Clubs of the Twin Cities, Jibicho says he started trying to achieve things and became involved with his community.

“I had people who actually cared about me, I had a place where I could make mistakes and learn from them and I wasn’t on the streets making mistakes,” he says.

Brumm says Jibicho took to heart what the Boys & Girls Club taught him. After helping to lead a mayoral forum for the city of St. Paul, Jibicho showed interest in continuing efforts to connect local leaders with youth. “He took that so seriously that he created his own corporate leader night in collaboration with his school. He made his own event to connect young people in his community with leaders in the corporate world.”

“He was nominated because he showed up and he did the work: he led, he created. He independently took the work of the Club and made it his own and transformed the environment here for other youth, which is the big part of why he’s made it to nationals,” says Brumm, who nominated Jibicho for the 2019 Boys & Girls Club of the Twin Cities Youth of the Year. From there, Jibicho went on to win the Minnesota State Youth of the Year competition and is now one of six youth moving on to the 2019 Boys & Girls Club of America National Youth of the Year title held in Washington D.C. this month.

In addition to his Boys & Girls Club awards, Jibicho is also a Bill Gates, QuestBridge and a Dell scholar. Brumm adds, “He’s the kind of person we want to be the next leader. You can say our world is going to be okay because of kids like Anaa.”

Jibicho’s advice to other young people: “You learn so much from the classroom, your mentors, and friends- don't let it go to waste. Ask yourself how you can apply what you’ve learned to whatever it is, to whatever problem. Because if you don’t, who will? So, challenge yourself. When you are faced without a challenge, make one- or find one- because there are many out there.”