Critical Inquiry Courses: Exploring the Borders of Truth and Reality 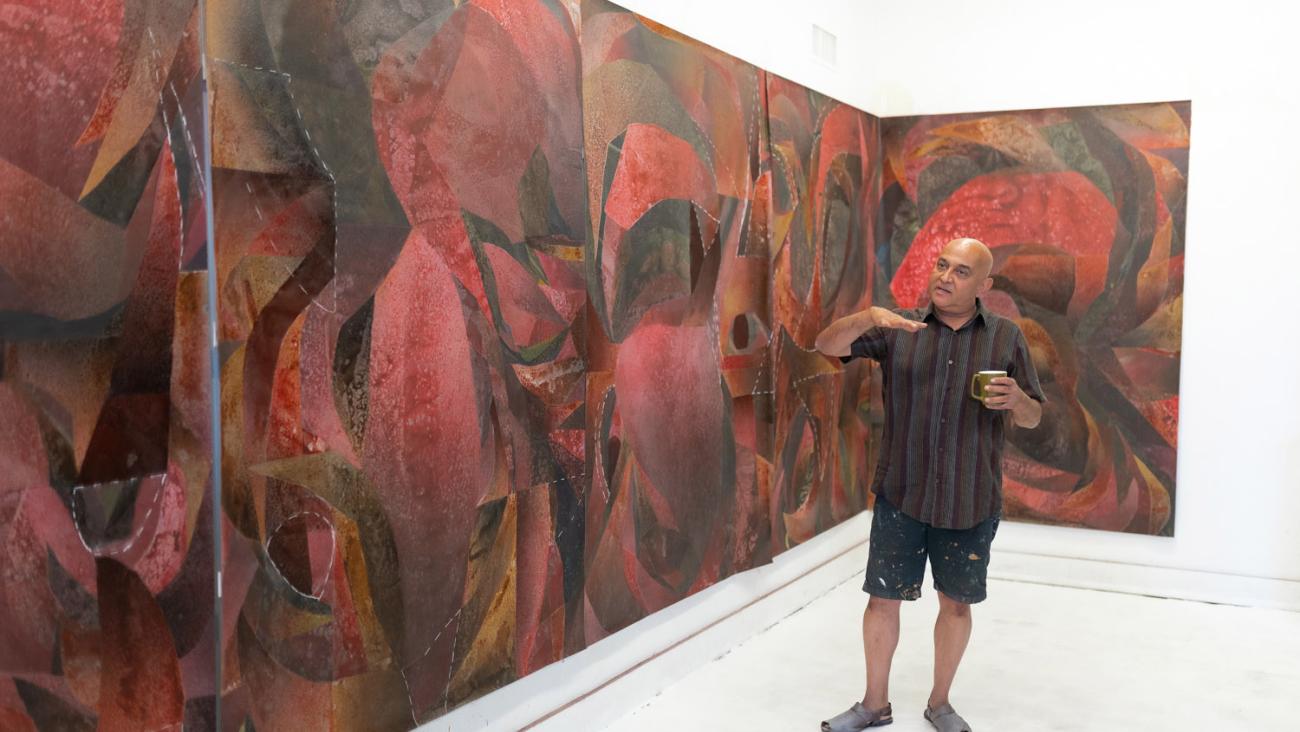 Story Date:
Sandeep Mukherjee, a professor of art, teaches an ID1 on Color and Its Affects.

With any luck, many first-year students will find in their Critical Inquiry seminars what Miguel Delgado-Garcia ’20, president of the Associated Students of Pomona College (ASPC), told those gathered for 2019 Opening Convocation he found in his.

It was “the first of many homes for me” at Pomona College, Delgado-Garcia said as he addressed students in Bridges Hall of Music on the first day of classes.

Known as ID1 courses for their interdisciplinary designation in the catalog, Critical Inquiry seminars give first-year students an introduction to the kind of deep reading, writing and discussion that will be a foundation of their educations at Pomona. Along with going on an Orientation Adventure and being part of a residence hall sponsor group, ID1 is one of three time-honored traditions that introduce first-years to small groups of students who share close experiences that help them form early friendships on campus—and perhaps find their first of many homes.

Here’s a look at some of the 30 ID1 courses this year, led by professors in disciplines as varied as mathematics, art, English, Russian, history and Chicana/o-Latina/o studies.

It’s little surprise one of the most requested ID1 classes this year considers “the problem of living with difference.” Professor of Mathematics Vin de Silva has taught the class a number of times, but says “what I’ve found in the last couple of years is that I feel that it’s almost inadequate for the much bigger task of rebalancing our public climate.”

One example is the 1957 movie 12 Angry Men, in which the character played by Henry Fonda slowly changes the minds of jurors in a murder trial. Another comes from Edward Tufte, a Yale professor emeritus of political science, computer science and statistics. Tufte studied the efforts of Morton Thiokol engineers who advised against the 1986 launch of the ill-fated shuttle Challenger. NASA officials pushed back and the launch went ahead.

“Of course it wasn’t OK,” de Silva says. “So then the whole question is, if you have some piece of information and some understanding that makes you think that something shouldn’t be done and there’s still pressure to do it, how do you try to communicate that? The contractors went to NASA and showed them all sorts of complicated figures and then said, ‘We don’t think you should launch.’ That isn’t always going to be effective. Tufte proposes a simplified chart, and as soon as you spend a couple of minutes looking at it and figuring it out, then you realize it’s totally clear that you shouldn’t launch.”

In an era when truth is under scrutiny, where does that leave fiction?

Colleen Rosenfeld, an associate professor of English and a faculty fellow this year in Pomona’s Humanities Studio, designed her course to complement the studio’s 2019-20 theme, Post/Truth.

“The question of post-truth was especially interesting to me for fiction because the debate right now is so much around facts. How do we evaluate facts, and is it about trusting institutional sources?” Rosenfeld says. “Fiction has an interesting status because it's neither truth nor lies.”

Among the readings in this class is the essay “Defence of Poesy” by 16th century poet Philip Sidney. “Sidney says against the charge from Plato that poets are liars that, well, a poet cannot lie because ‘he nothing affirms,’” Rosenfeld says. “If you don't make an affirmation, then your speech can't be held to the question of true or false.”

“These questions are old. We're thinking about them in this political context, but it's the same set of ideas that people have been using to think through literature and poetry and fiction, as far back as I can read.”

Color and Its Affects

Inside Sandeep Mukherjee’s studio, a work in progress lines two walls in layers of fleshy reddish-brown paint. Hanging from the ceiling are aluminum moldings of tree trunks, sprayed with black and white paint that runs down the metal like rivulets.

Mukherjee, an associate professor of art and recipient of a 2017 Guggenheim Fellowship, says one of the challenges his ID1 students will face is the elusive endeavor of writing about color and its affects. (He draws on affect theory as proposed by French philosopher Gilles Deleuze.)

“It escapes, because color isn’t a fixed entity," Mukherjee says. "It depends on what’s around it, where it’s located, space, time, the person viewing it. So when all these factors come together is when color is produced as an experience, and to try and pin it down in language is almost impossible.”

Black and white will be examined too, and Mukherjee notes the inadequacy of those terms in describing race or skin tone.

“You’ve got brown, purple,” says Mukherjee, who often assigns self-portraits to beginning painting students. “I have them make the color that is their flesh, their hair, their eyes, their eyebrows. So they understand how much color each of us has.”

More unsettling is an essay students will read by Aruna D’Souza in Whitewalling: Art, Race & Protest in 3 Acts on the painting Open Casket by Dana Schutz. The painting depicts the grotesquely mutilated face of Emmett Till, the 14-year-old black boy who was murdered in 1955 after whistling at a white woman. His mother chose a glass-topped casket to show the world what had been done.

“There was a huge controversy at the Whitney Museum about race and who gets to speak on it,” Mukherjee says, noting that Schutz, the artist, is white.

“The most gratifying feedback I get is, ‘The way I look at the world has changed on the most basic level,’” Mukherjee says. “That’s profound.”

Robyn Jensen, a visiting professor of Russian, weaves her specialization in Russian literature with the histories of Russia and the United States in an examination of how closely aligned utopia and dystopia can be.

“At the beginning of the 20th century in Russia, you have all this kind of utopian thinking,” she says. “You have the Bolshevik Revolution in 1917, which promises this radical restructuring of society. There’s a lot of focus during that period on what a utopia would actually look like. Things like, how will we transform our everyday life in order to achieve communal harmony? How will the family be reimagined? How will living spaces change?”

What evolved, of course, was not a Communist utopia but the totalitarian regime of Joseph Stalin, marked by brutal practices such as the forced labor camps known as the Gulag.

Jensen’s seminar considers utopian ambitions and how they can go awry, by studying literature, films and architecture.

“The founding of America almost feels like this utopian moment too,” she says. “The idea that we’ll set out anew, we’ll create a new society where we’ll have religious tolerance and so on and so forth. But as we know, that came at the dystopian price of the colonization of the land, genocide and slavery.”

Texts include Plato’s Republic, the novel We by Yevgeny Zamyatin that was a precursor to George Orwell’s 1984 and Margaret Atwood’s The Handmaid’s Tale.

Borders and Belonging in Latinx America

A final seminar inseparable from the headlines considers the border crisis and beyond and is led by Tomás Summers Sandoval, associate professor of history and Chicana/o-Latina/o studies.

“I think we all know there’s a history to our present moment—a story of how we got to where we are as a nation—but most of the time we don’t know much about it. Moments like the one we’re in right now inspire a lot of us to learn more about our history because we see and feel the cost of our not knowing,” he says.

Readings include historian Greg Grandin’s 2019 book, The End of the Myth. “It’s a sweeping history of the ‘frontier’ and the ‘border’ in U.S. history, from the colonial era to the present,” Summers Sandoval says. “I decided right away to make it the foundation of our class.” Other texts include The Line Becomes a River: Dispatches from the Border, by Francisco Cantú, winner of the 2018 Los Angeles Times Book Prize in Current Interest.

“ID 1 is such a special class,” Summers Sandoval says. “I really love the chance to work with first-year students as they acclimate themselves to the colleges. It’s even more exciting when we get to do that while reading some of the best works in Chicanx and Latinx Studies.”