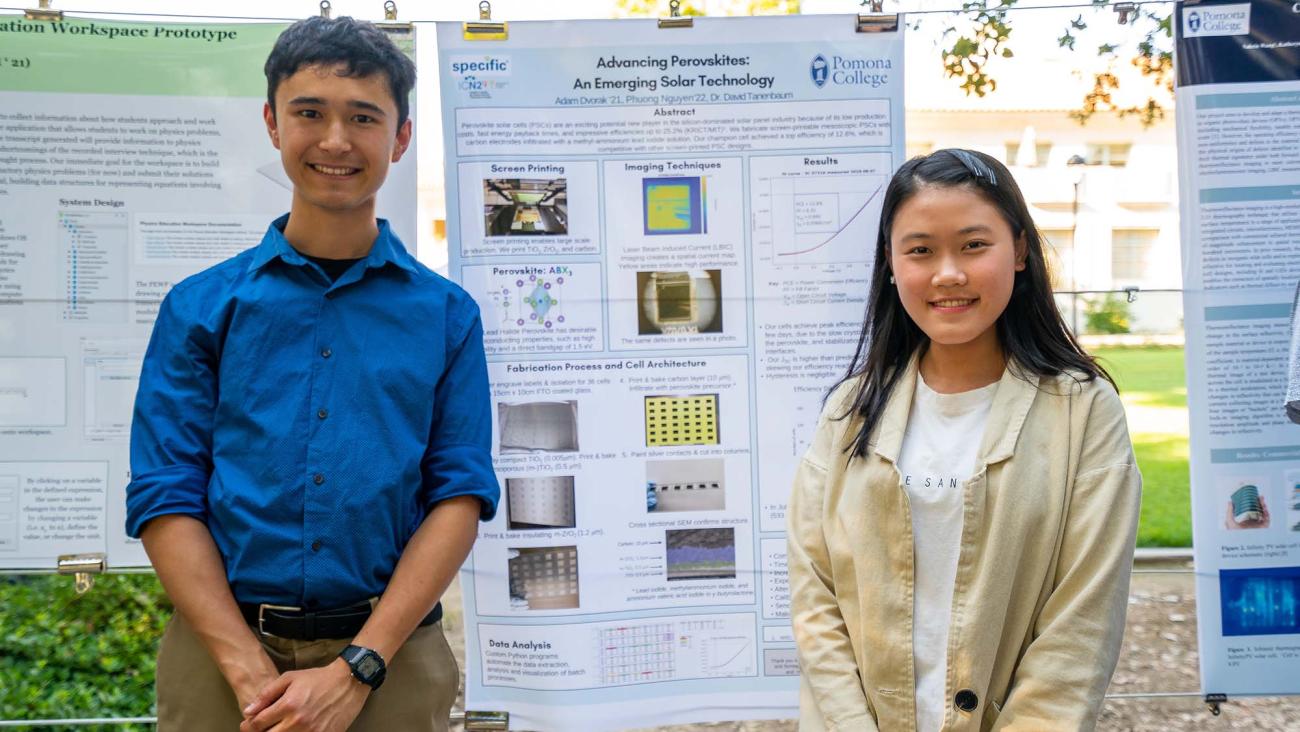 The grant will cover the costs of a fully automated photo conversion efficiency system, a programmable multiple source thermal evaporator, a high-speed optoelectronic characterization system, a suite of solar simulation lamps and calibration sensors, a probe station and sensors for a glovebox.

Three professors at The Claremont Colleges who work in the field of solar cells, also known as photovoltaics, partnered to work on the grant proposal together as principal investigators: David Tanenbaum, a professor of physics at Pomona; Janice Hudgings, Pomona’s Seeley W. Mudd Professor of Physics; and Hal Van Ryswyk, Harvey Mudd’s John Stauffer Professor of Chemistry.

“Each of us come at this with different areas of expertise and different angles,” says Tanenbaum, who is currently serving as Associate Dean of the College. “It was clear to me that there was a potential for us to do something synergistically together.”

Hudgings adds, “The new instrumentation will both enhance our fabrication capabilities, making it easier to build new devices, and  also add new characterization capabilities, so that we can better measure device efficiencies and understand how to improve our devices.”

The three professors employ a number of students to do research who would benefit greatly from the new equipment. “Hal, David, and I all have active research programs involving undergraduate students, including students who are physics, chemistry, math and computer science majors,” says Hudgings. “Some of those students are directly engaged in making devices; they will be hands-on users of some of the new fabrication tools, such as the new thermal evaporator. Other students are focused on characterizing the devices, trying to understand how they work and why they fail; those students will use the new solar simulators, probe station, and more.

“The ability to use high-end, research grade instrumentation such as that acquired by this grant is a huge leg up for students, both in terms of the job market and graduate school, and also in terms of understanding how high-quality scientific research is done,” she adds.

The new equipment, bought over the next three years, will be primarily housed at Millikan Lab on Pomona’s campus but will be available to Van Ryswyk’s students and other Claremont faculty. “A wide range of Harvey Mudd students with backgrounds in chemistry, physics and engineering interested in materials-related research on solar cells will benefit from the equipment we acquire with this award,” says Van Ryswyk. “Those Harvey Mudd students who do research with me will benefit directly, and there are many at Mudd who don’t know it yet but will be thrilled to use some of the tools that we have built in support of other research.”

The need for the new equipment arose a few years ago for Tanenbaum after a sabbatical year in Spain where his research on solar cells pivoted slightly.  “I wanted to continue to do that work at Pomona when I came back and while I knew how to do it, I didn’t have all the facilities I needed to do it,” he says.

This past winter, Tanenbaum, Hudgings and Van Ryswyk sat down to make a list of the equipment that they needed. “What are the things that we would like to have that would make our labs more comparable to what happens at a bigger research institutions where people have more funding?” says Tanenbaum.

One example they chose was a metal evaporator. “We have an old metal evaporator that I built, but it’s not very user-friendly and it has limited capabilities. So, we wanted to get something that was much easier to use, with the ability to do evaporate multiple materials simultaneously, and much more likely to be what students would see if they went out in the world later on – something more standard,” explains Tanenbaum.