For Native Hawaiian, a New Horizon 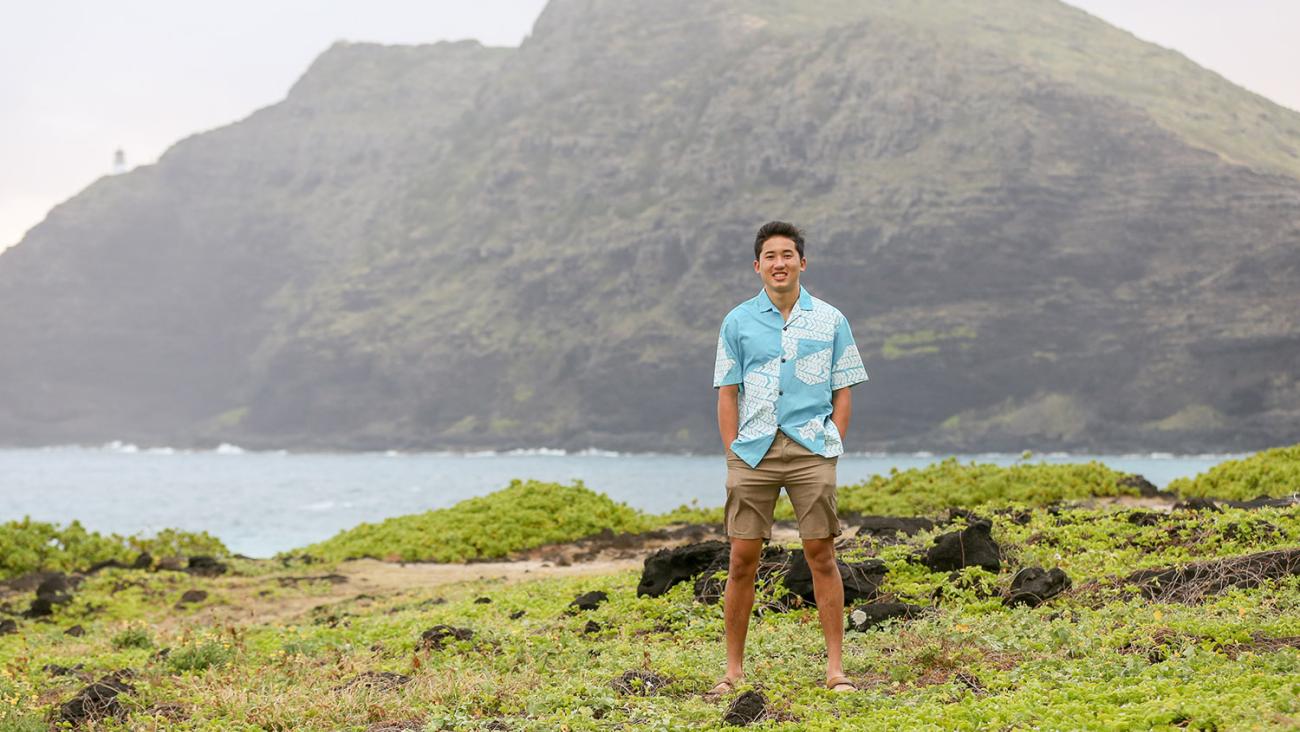 Story Date:
Kalau Morikawa '23 visiting a beach on the island of Oʻahu.

Kalau Morikawa '23 is one Pomona College student who definitely didn’t come for the weather or the Southern California beaches.

Morikawa is a Native Hawaiian.

He grew up surrounded by the Pacific Ocean, accustomed to trade winds and balmy year-round temperatures in the 70s and 80s. Arriving in Claremont for preseason football practice—Morikawa is a defensive back for the Sagehens—the first-year student found it hot, and saw fewer stars in the sky.

Back home on Oʻahu, he immersed himself in Native Hawaiian culture, studying the language, researching his ancestry and learning the navigational techniques used by ancient voyagers.

Like those voyagers, Morikawa yearned to experience the wider world and found his way to Pomona through College Horizons, a nonprofit that supports American Indian, Alaska Native and Native Hawaiian students in the transition to higher education. College Horizons provides intensive six-day summer admissions workshops on college campuses to about 100 Native students selected by application each year, and 99% of those students go on to college. Three from the program enrolled at Pomona this fall.

“Hawaiʻi’s unique geography makes it difficult for kids to attend out-of-state colleges and universities,” Morikawa says. “The Hawaiʻi kids can’t just pack up and drive to a college campus.”

He also believes the high cost of college is a significant hurdle for many local families, and that many students stay home if they attend college because it is familiar.

“I wish a lot of us went away more, to get that sense of being uncomfortable and following your own path,” he says.

For Morikawa, following his own path doesn’t mean forgetting where he is from. His high school, Kamehameha, requires students to become proficient in the Hawaiian language. “Without language, you can’t have culture,” he says. Morikawa also joined Nā Kelamoku, or the sailors, the youth leadership initiative of the Polynesian Voyaging Society. There, he learned the traditions of sailing double-hulled canoes, navigating by the stars, the winds and even the flight paths of birds.

“I was immediately drawn in,” Morikawa says. “Everyone knows that the Hawaiians were great navigators, but no one really knows or understands how or why or what techniques they actually used.”

One of the group’s outings took the young sailors to a national historical park on the island of Molokaʻi.

“We got to see the peninsula, Kalaupapa,” he says. “That’s where people with leprosy were sent. On the back side of the peninsula were steep cliffs that they couldn’t climb up, which kept the Kalaupapa residents totally isolated from the rest of the island. They were stuck there. We got to see where the last couple of people with leprosy still live. Even though scientists were able to stop the spreading of the disease of those infected, Kalaupapa will forever be home to some of the residents. That was a great experience, not only because they’re Native Hawaiian but because even though it was a terrible place they were sent, they were still able to establish a sense of home and community.”

It was a counselor at College Horizons who helped Morikawa see that his experience at Kalaupapa, rather than his more typical high school experiences playing football and soccer, could be an excellent topic for his college application essay.

As he starts his time at Pomona, Morikawa is considering studying economics, sociology or psychological science, and he chose a liberal arts college partly because he could explore different areas.

“I’m really excited to be able over the next four years to discover what I really want, what’s going to drive me for the rest of my life, what my passion is,” he says.

Whether he will return to work and live in Hawaiʻi “is the question I always ask myself,” he says. The median home price on Oʻahu, where his family lives in the town of Kailua, has soared to about $800,000.

“It’s very controversial, I would say. Since everyone considers Hawaiʻi a paradise and everything, people want to move there for vacation or when they retire,” Morikawa says. “It’s just causing the housing market to skyrocket. It’s so difficult that a lot of Hawaiians, even though it’s their land where our ancestors were born and where our families all are, a lot of them are moving away to the mainland, which is very sad.

“My parents, they’re looking ahead. They’re trying to save up to buy another house so hopefully when they pass away, this is sad to think about, but so their last gift for me and my sister would be that we’d each have a house.”

In addition to the expense of housing, the overall cost of living in Hawaiʻi is high because food and everyday goods are mainly shipped to the islands. But being able to one day raise his children in his culture and with family is important to Morikawa and his parents.

He knows that to return to Hawaiʻi he will need a career that provides both a job in the islands and enough income to live there.  He says he is grateful that Pomona is giving him the opportunity to get an education that will prepare him for the future.