From Broadway to Pomona, “Pippin” a Blend of Old and New 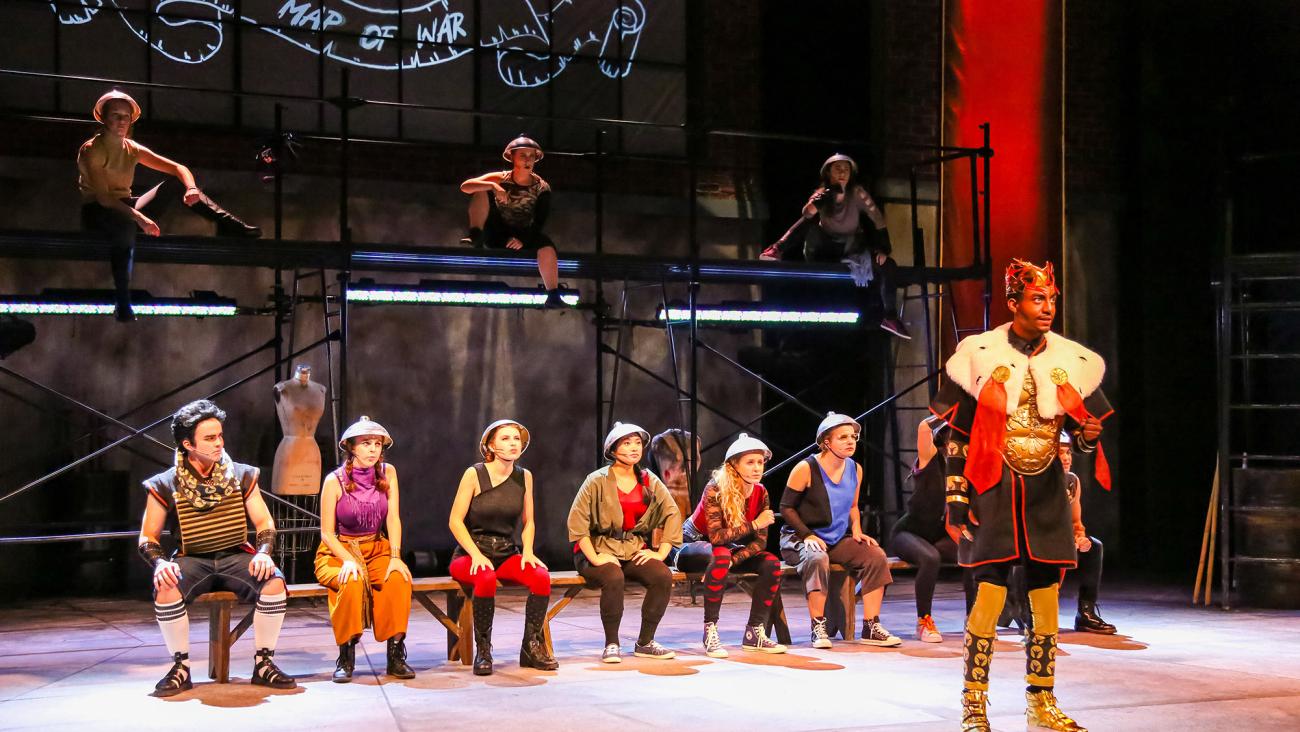 Anime, hip-hop and the Holy Roman Empire in one play, you ask? In “Pippin,” the latest production from the Pomona College Department of Theatre and Dance, the answer is yes, yes and yes to all of it.

Opening Thursday, Oct. 31, and running through Sunday, Nov. 3 at Seaver Theatre, “Pippin” is billed as taking place “long ago in the future” in “the HRE in the LOA” (Holy Roman Empire in the Land of Anime, explains guest director Tim Dang), blending anime and hip-hop with musical theatre and contemporary dance. And while there are departures from the 1970s Tony Award-winning Broadway show created by Stephen Schwartz, Roger O. Hirson and Bob Fosse, its inspiration still comes from the original play in which a performance troupe tells the story of a young prince searching for meaning.

Dang, the cast and crew were on their own search for meaning as they decided how best to tell the story of “Pippin.” Their choices, made in collaboration, were all about parallels and intersections between the past and present. While anime and hip-hop aren’t necessarily obvious choices, for Dang and company, upon reflection, they seemed like natural ones.

“When the original Broadway production was done, the make-up was highly stylized. The production utilized stark white pancake makeup on the ensemble’s faces and there were big eyes” says Dang. “And in anime, the characters have huge, round eyes.”

Anime also has its fair share of gore, he says, as did the Holy Roman Empire.

Hip-hop seemed to be a perfect match, too. Fosse, who directed and choreographed the original “Pippin” loved isolation in movement, Dang says.

“So that kind of reminded me of hip-hop in a way in order to contemporize and make it more relevant to today's audience, since hip-hop uses a lot of freezes and isolation as well and it's very dynamic and gives an edge to dancing,” he says.

The performance troupe in the original “Pippin” was a collection of street performers. Hip-hop started in the street, Dang notes. In “Pippin,” the music will be done in the style of a DJ, with bass and electric guitars and backing tracks.

The costumes, designed by Lee Meyer ’20, are a combination of nods and nudges, too. Meyer said they designed the costumes based on history but certainly not strictly so — knee-high athletics socks are paired with Roman gladiator sandals, for example. One of the costuming challenges was melding anime and hip-hop fashion with function, to make sure the actors could move freely, says Meyer.

The artistic choices in “Pippin” are particularly Generation Z-friendly, according to Dang.

Dang says with this production of “Pippin,” students have created their own kind of style. Is something new being birthed on the Seaver stage?

“I don't even know if hip-hop and anime have ever been integrated. There might be a couple of anime stories that do incorporate a hip-hop kind of culture. But it's a very interesting mix because anime originally started in Japan and hip-hop originated in Brooklyn,” says Dang. “We're in this together and creating something that I think is very unique for Pomona College.”