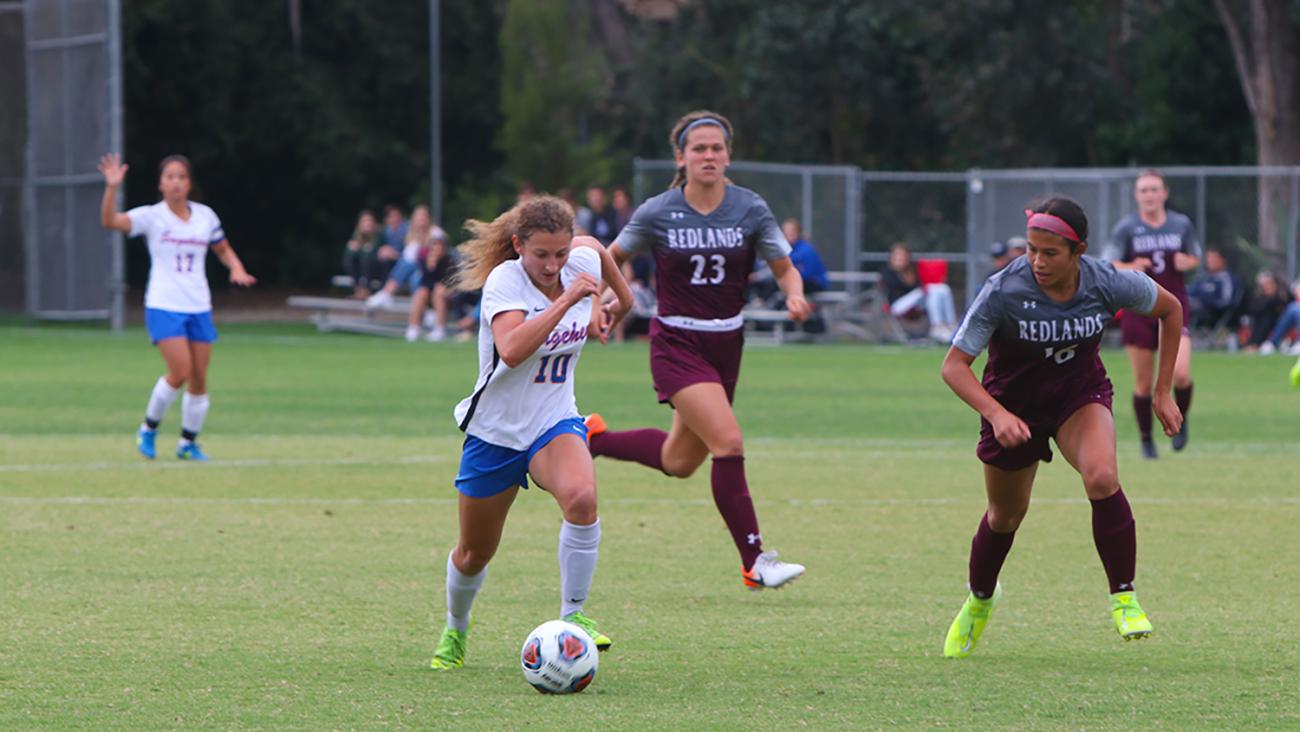 Getting ready for the big-time awards dinner where she would be honored for her athletic and academic accomplishments during high school, Hannah Mandell ’23 knew a college quarterback would be recognized too.

“I thought, ‘The name sounds familiar,’” says Mandell, a first-year standout for a Pomona-Pitzer women’s soccer team that has reached the NCAA Division III tournament after sweeping the SCIAC regular-season and tournament titles.

Mandell, a three-sport athlete, two-sport Texas state champion and National AP Scholar, won the $30,000 Davey O’Brien High School Scholarship that night in recognition of character, community service and leadership in addition to achievements in athletics and the classroom.

That quarterback, by the way? Kyler Murray, the Heisman Trophy winner from the University of Oklahoma, picked up the Davey 0’Brien National Quarterback Award. He would go on to become the No. 1 pick in the NFL draft and is now the starting quarterback for the Arizona Cardinals.

“It didn’t really hit me until probably a couple months after the event how big of a deal it was,” Mandell says. “Jim Plunkett won the Legends Award, the Raiders quarterback, multi-time Super Bowl champion. I just chatted with him over some salad.”

Mandell is thriving in college too. She’s the second-leading scorer for a Sagehens team that has been ranked as high as No. 7 in the nation among NCAA Division III teams. Even the 2016 Pomona-Pitzer team that went 17-1-4 and reached the Elite Eight of the NCAA Tournament never cracked the top 10. And the postseason is still going for this team, led by a senior class that won its third SCIAC regular-season title in four years. The Sagehens (17-1-1) will face St. Scholastica (14-7-0) in the first round of the NCAA Tournament on Saturday, Nov. 16, in Waverly, Iowa.

“The team this year has this undeniable chemistry,” Mandell says. “There’s a really good mixture of grit and joy. It’s a special team.”

The backbone is first-team all-SCIAC goalkeeper Isa Berardo PI ’20, who rarely allows a goal. It’s nothing new, really: Berardo led all Division III goalies last season in both goals-against average (.182) and save percentage (.944). This season, the Pomona-Pitzer defense combined for 14 shutouts and gave up only five goals during the regular season, the fewest in program history.

Bria VarnBuhler ’20, the SCIAC Athlete of the Year in women's soccer, led the team in regular-season scoring with 15 goals, and Mandell, the SCIAC Newcomer of the Year, was second with 10 in her first college season. Among the highlights: Mandell had a hat trick against Redlands and scored the only goal in a 1-0 win over Claremont-Mudd-Scripps to sweep the regular-season series.

“She’s getting better all the time, which is exciting,” says Coach Jen Scanlon. “She’s got a swagger about her, but it’s a very endearing swagger. It’s warm and genuine. She also really appreciates her teammates and their ability and success. That’s one of the things we’ve been talking about a lot, because the team is so good and there are so many talented players. It’s celebrating your teammates’ successes.”

Things haven’t always come as easily to Mandell as it might seem for someone who was senior class president, homecoming queen and seventh academically in a class of about 500 at Wakeland High School in Frisco, Texas. Sure, in the 5-A state soccer championship game her junior year, the all-state midfielder did score the tying goal late in regulation and then added a penalty kick that helped win it in a shootout. She also set the school record in the 1600 meters during track season and was part of a state championship team in cross country her senior year.

Yet Mandell almost abandoned soccer after her family moved to the Dallas-Fort Worth area from Southwest Virginia at the end of 7thgrade—a move she now calls “a huge part of my growth as a person.”

In Virginia, “I was a soccer rock star, the best player in the world in my mind,” says Mandell. She showed up for club tryouts in Texas only to find a half-dozen players already in the development program for the U.S. national team. “For a 13-year-old girl who’s never seen anything like this before, it kind of crushed me. I became so afraid of not being the best,” she says.

“For six months to a year after moving there, soccer became a nightmare. I would have panic attacks before every practice. I didn’t want to mess up. I was comparing myself so harshly to everyone else.”

At home, she retreated to a closet for hours.

“I would stay in there and curl up in a ball and cry because I was so afraid. I was begging to quit. This is a sport that I loved and I thought I was going to do for the rest of my life, and was tentatively going to try to get recruited for.”

Finally, “I realized the ludicrous nature of what I was doing,” she says. “I found a piece of paper and I wrote ‘I am a champion. I’m a rock star. I score goals.’ I pasted it on my mirror, I pasted it on my door, I pasted it on my closet. It feels so weird to say it out loud to yourself, but over time, it really got me to start believing it and then embodying it, and I eventually was, lo and behold, excited to step on the field again.”

Mandell finished her career as her high school’s season and career leader in assists. She left her mark in less-heralded ways, too, bowing out of competition for the final spot in the last cross country race of her senior year to let a teammate run because her teammate hadn’t gotten to play in the soccer title game.

“She did a great job and I kind of cheered on the sidelines for that one. In the end, we ended up winning the state championship for cross country for that race,” Mandell says. “It just kind of taught me that there are many different ways in the grand scheme of things.”

Beyond all that, Mandell has a keen interest in environmental issues, founding a community group called the Environmental Conservation Organization and volunteering for Bonton Farms, a South Dallas organization that has worked to improve health of residents in a high-poverty area of the city through organic agriculture. At Pomona, she plans to study computer science and environmental analysis, and already is working as a lab technician for Associate Professor Marc Los Huertos, coordinator of the Environmental Analysis Program. After college, she has her eye on NOAA Corps, the scientifically and technically oriented uniformed service wing of the National Oceanic and Atmospheric Administration.

“She’s a very focused person in wanting to make an impact on the world,” Scanlon says, noting that like a number of players on the team, Mandell could have made the roster at some Division I schools.

“A lot of these players have been very focused on academic fit and the Division III balance,” Scanlon says. “That’s a big selling point for people of that ability in the classroom and on the soccer field.”