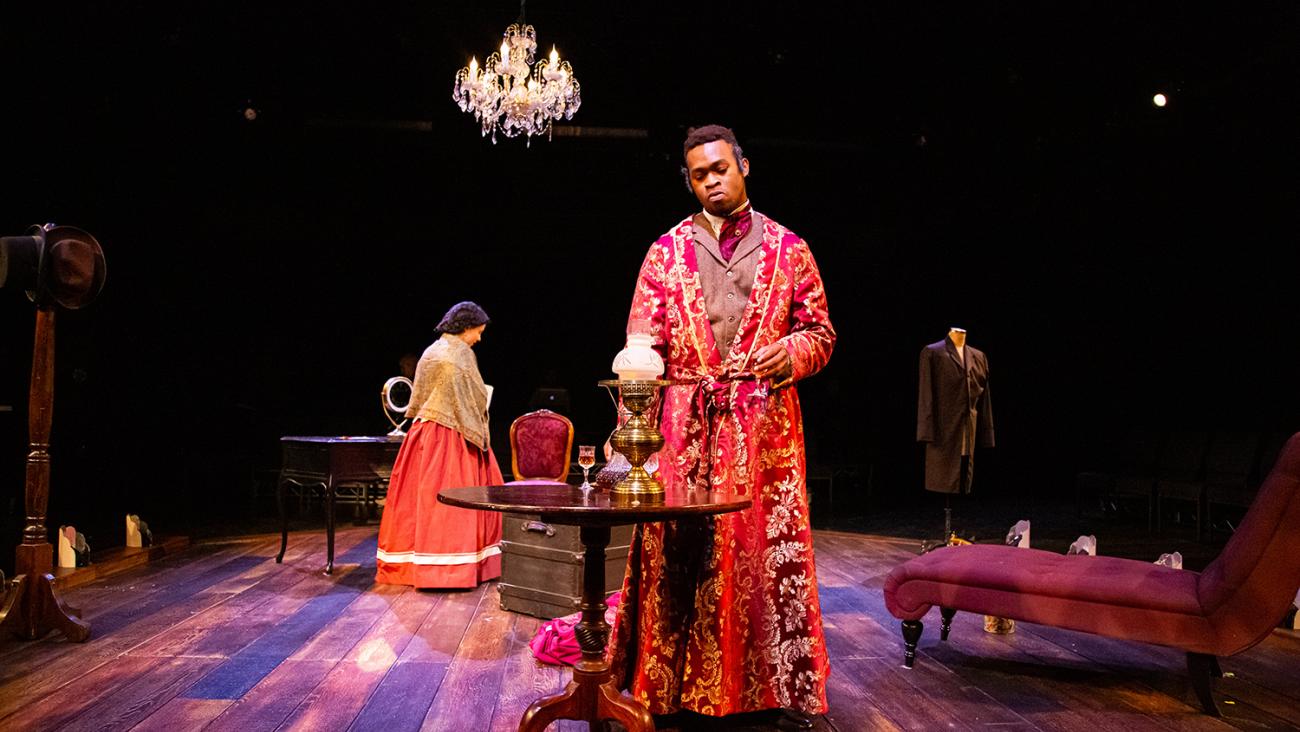 “Red Velvet” as it will be performed on the Seaver stage will differ from “Red Velvet” as written. Director Kenshaka Ali and the theatre students take the award-winning work about the great classical black actor Ira Aldridge and reimagine it, telling a tale of triumph rather than tragedy.

“Red Velvet” is the true story of Aldridge, a black man born free in New York during the 1800s when slavery was still in full force. A racist mob burned down the theatre Aldridge worked at, so at the age of 17, he boarded a ship to Europe and made his 40-year acting career overseas. He became one of the most heralded and in-demand classical actors in European history and made his influence felt keenly on the craft. The play is centered around Aldridge’s portrayal of Othello — the first black man to perform that role on a major stage in London — and the critics’ response to his presence.

“It brings to light another American-born African who is recognized as a genius but whose memory and accomplishments and achievement have been buried in the annals of history,” says Ali.

Ali says the fact that Aldridge existed still comes as a surprise and shock to most people who discover him. It was certainly a shock for the playwright Lolita Chakrabarti, who had never heard of him, though she was an acting student at the Royal Academy in London. Chakrabarti became intrigued as to why a great classical actor who made much of his career in London was a great unknown. For the playwright, this collective amnesia was — in theatrical terms — a tragedy.

However, Ali and his students believe the playwright missed the mark in how she cast her story. They felt she tried to impose that tragedy on Aldridge’s life, says Ali.

“In terms of the appropriation and misrepresentation…we had an opportunity to redress that legacy and all the students were eagerly on board for that.”

To do so was an exercise in subverting the text, Ali says. They did so by reconceptualizing the play “in a way to bring Aldridge’s story from one who was victimized and who died a maddened or demented, enraged old man to one who indeed was a victor instead,” says Ali. The students focused on more of the subtext and changing the characters’ perceptions.

At the end of the play, as originally written in 2012, Aldridge goes mad because of his rejection by the British critics. The play is a flashback drama, so Aldridge is seen at the age of 60 and then in his 20s when this performance at the Covent Garden theatre took place. Each time at 60 he’s demented, bitter, going mad, haunted by 40-year-old ghosts.

But Ali and the students turned Aldridge as written on his head.

“We take that dementia and cast it as righteous indignation,” says Ali.

Both the cast and director have found the subversion to be both interesting and illuminating, Ali says.

“It’s important to subvert a play to understand the dynamics of what happens when someone outside of our experience tells our story and the importance of telling our own stories in order to represent our truth and our reality.”

Ali says that — unfortunately — subversion is a necessity in this day and age, given power dynamics and widespread misrepresentation.

The students’ effort of subversion is a worthy one, Ali says.

“We focus on moment-to-moment truth and addressing each moment of this play from a certain perspective of truth. From there we don’t concern ourselves with the outcomes. We’re concerned about stringing together enough truthful moments, so we remain in integrity with the highest ideals of our craft and our art and our purpose for being artists.”

Onetta Brooks '74, past president of the Alumni Association Board
END_OF_DOCUMENT_TOKEN_TO_BE_REPLACED
© 2020 Pomona College