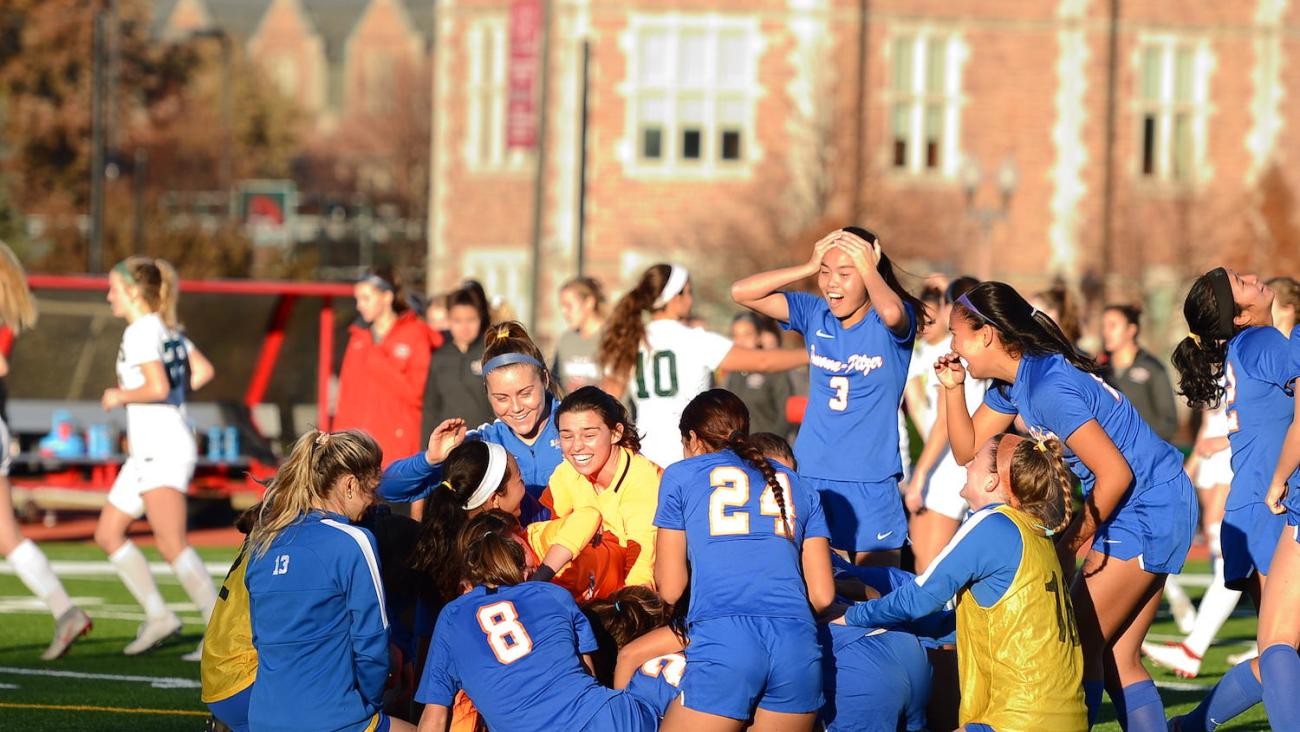 Every senior on the Pomona-Pitzer women’s soccer team that has reached the Final Four of the NCAA Division III Championship for the first time knows exactly how slender a sliver the margin between winning and losing could be.

It could be a single goal by first-team All-American Bria VarnBuhler ’20, who has set a Pomona-Pitzer record with 21 this season—including nine game-winners, tied for third-most among all Division III players.

It could be a game-saving stop by third-team All-American Isa Berardo PZ ’20, the starting goalkeeper for a strong overall defense that has shut out 20 of 23 opponents on the way to a 20-1-2 record. After leading Division III in goals-against average and save percentage last season, Berardo is in the top three in both national categories again.

Or it could be as slim a margin as a single penalty kick settling into the back of the net—or tipped away by a finger.

Close games have become a Pomona-Pitzer specialty. The Sagehens advanced to the Final Four by winning their last three games by scores of 1-0, 1-0, and finally by settling a scoreless tie against No. 3-ranked Washington University in penalty kicks, with Berardo making the save that set off a celebration.

It was a reversal of what happened three years ago, when these seniors were playing in their first NCAA postseason and a loss to the University of Chicago in penalty kicks sent them home, one step shy of the Final Four.

“I mean, gosh, it was heartbreaking after losing that,” remembers VarnBuhler. “Coming back and having our season potentially end the same way as it did freshman year—that was just not really an option. We had just worked too hard for that to happen.”

It didn’t. The Sagehens got payback against Chicago this time with a 1-0 overtime victory in the regional semifinal on a golden goal by Anna Ponzio PZ ’22. Then they edged Washington in the final, thanks in part to weeks of practicing penalty kicks in anticipation of the possibility advancing could come down to that, and partly because of what Coach Jen Scanlon calls “this pretty amazing group of seniors.”

That group includes VarnBuhler, the Southern California Intercollegiate Athletic Conference women’s soccer athlete of the year, and first-team All-SCIAC players Berardo and Brianna Lau PZ ’20. (The three also were named first-team All-West Region.) The other two players in a senior fab five are Lily Gane PZ ’20 and Megan Kuo ’20. Together they have won more games than any other class in the history of the program.

“They knew that in their last chance and their senior year, they were going to find a way to get it done, and that's why it's been fun to watch,” Scanlon says. “We've worked really hard in the last couple of years to build a championship culture, and now we see what all that work was for. We've gone up against the top teams and gone toe-to-toe and come out on the winning side.”

After Berardo’s save on the final kick against Washington University, “gosh, the feeling I think all of us had,” VarnBuhler said. “I mean, I just immediately ran toward the goal screaming louder than I think I've ever screamed before. We talked a lot about how we kind of felt like it was full circle at last.”

After perhaps the most unusual Thanksgiving break of their lives—a three-day pause during which players followed the coaching staff’s instructions to stay fit and VarnBuhler wrapped up the last of 10 graduate school applications due by Dec. 1 to pursue a Ph.D. in chemistry—the players were back on campus for a Sunday night practice, preparing to leave three days later for Greensboro, North Carolina, where the eighth-ranked Sagehens will face No. 2 William Smith College on Friday, Dec. 6. (The game will be streamed live on NCAA.com at 10:45 a.m. PST.)

The winner of that game will play the winner of the other semifinal between No. 25 Carnegie Mellon University and top-ranked Messiah College, a five-time NCAA champion, for the 2019 title at 11:30 a.m. PST Saturday.

The Sagehens head into the Final Four trying to win what would be a second national championship for Pomona-Pitzer in two weeks. The men’s cross country team won the NCAA Division III title on Nov. 23, the same weekend the soccer team advanced to the Final Four.

“That was actually really cool, because we knew that cross country meet was Saturday morning,” says Scanlon, also Pomona-Pitzer’s interim athletic director and a professor of physical education. “We were watching and tracking it at breakfast. And then we heard that they won it, right before we were leaving to get on the bus. It was just this big momentum boost of energy.”

When the margin is so thin, every little boost helps.