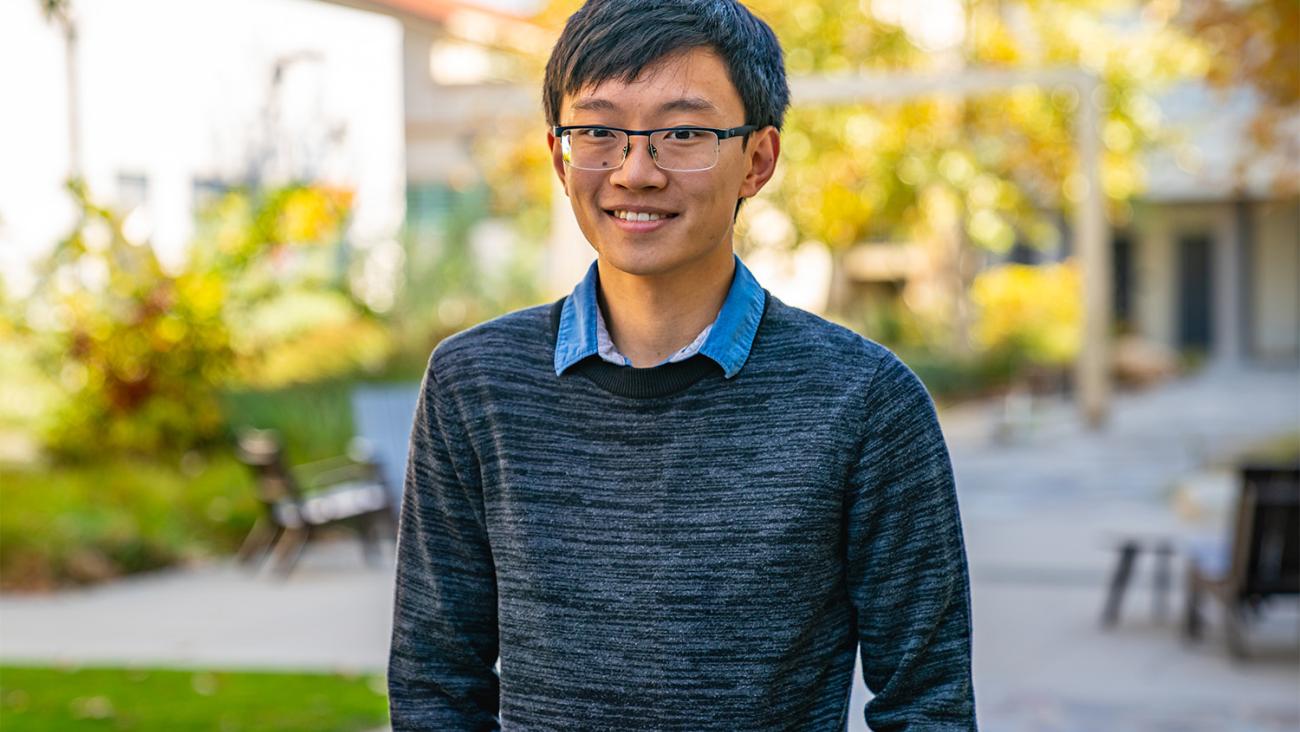 Isaac Cui ’20 is a recipient of the prestigious Marshall Scholarship, which will fund his graduate studies in the United Kingdom. To receive this graduate scholarship, awarded to up to 50 American students every year, took a village and a vision.

Cui, a physics and politics major who hails from both Beaverton, Oregon and Austin, Texas, didn’t intend to apply for this award — or any fellowships. Cui had his gaze firmly fixed on law school immediately after graduating from Pomona. But his faculty mentors at the College recommended he stretch his gaze further still and apply for the Marshall.

“Their advice was mostly to keep my options open in case I didn’t want as rigid a career trajectory as I was planning,” says Cui.

As he began to explore all of the scholarship possibilities, he wasn’t just gaining knowledge about the ins and outs of the awards, his vision for himself expanded as well.

“As I began to explore these scholarships, I also came to believe that being outside the United States and studying the politics and law of another place would be really, really valuable for broadening my horizons.”

While it will delay his law school plans, Cui thinks his time in the U.K. will be a huge added value.

“For someone interested in American constitutional law, there’s no place in the world as fascinating as the U.K.,” says Cui. There is always wisdom to be learned in other places, he says.

“The U.K. and U.S. have these shared cultures and institutions that bifurcate after the American Revolution, and as they’re both now grappling with a resurgence of nationalism and decaying trust in public institutions, I’m so curious to see what happens in the next two years while I’m in England.”

During his two years in the U.K., Cui hopes to study at the London School of Economics and Political Science (LSE) as well as the University of Manchester. His aim is to earn a master’s degree in regulation at LSE and a master’s in democracy and elections at Manchester.

Then, after law school in the U.S., Cui plans to practice some form of public interest law. Currently, his main interests are election law and voting rights, but some time as a public defender is part of his plans as well. Ultimately, Cui’s goal is to be a federal judge.

Toward those goals, Cui has received plenty of guidance at Pomona — the evidence is that he gives shout-outs to what seems like half of the College faculty across the disciplines. But here are four mentions:

Cui calls Politics Professor Amanda Hollis-Brusky “a lodestar and source of wisdom” for all the ways she has challenged him to rethink his views on law and politics. Politics Professor Heidi Haddad has served as a mentor and Cui says she provided the seed for his interest in international and comparative law. They are collaborating on a paper together; Cui calls that a highlight of his time at Pomona. Haddad was among those who nudged him to apply for the Marshall Scholarship and helped him with the process. Cui says it’s safe to say that if not for Haddad’s mentorship, he wouldn’t have won the scholarship.

In physics and astronomy, Professors Philip Choi and Dwight Whitaker supervised Cui’s first and second Summer Undergraduate Research Program (SURP) projects. He says Choi was willing to teach him and challenged him on…basically anything.

“From our immediate work characterizing defects in our telescope’s tracking performance to moral questions about free speech or the purpose of scientific inquiry in a world characterized by inequality and injustice. I learned a lot from Professor Choi that summer, and he has been a source of advice and support ever since.”

Working with Whitaker in his lab the following summer taught Cui a lot about how scientific research is conducted, he says.

“I’m experiencing firsthand the iterative processes of discovery, questioning and testing — how non-linear real scientific inquiry is. Professor Whitaker has also been very influential for how I think about teaching physics, which matters a lot to me as a physics teaching assistant.”

Nurtured by a community of professors and prepared to take flight across the pond very soon with a Marshall Scholarship in hand, Cui has some sage(hen) advice to offer incoming Pomona students.

“Find something that you’re passionate about and figure out how to do that with Pomona’s resources. Pomona is a place full of opportunity and potential, but the College often requires you to take the first step to turn potential into reality. Ask professors to do research with them; propose projects to deans or departments and get funding for them; seek out clubs that do cool things and, if nothing interests you, make your own.”

The Marshall Scholarship Program provides the opportunity for graduate study in the U.K. for up to 50 intellectually distinguished young Americans annually. The program was created to honor the ideals of the Marshall Plan, which aided the recovery of Europe after World War II.