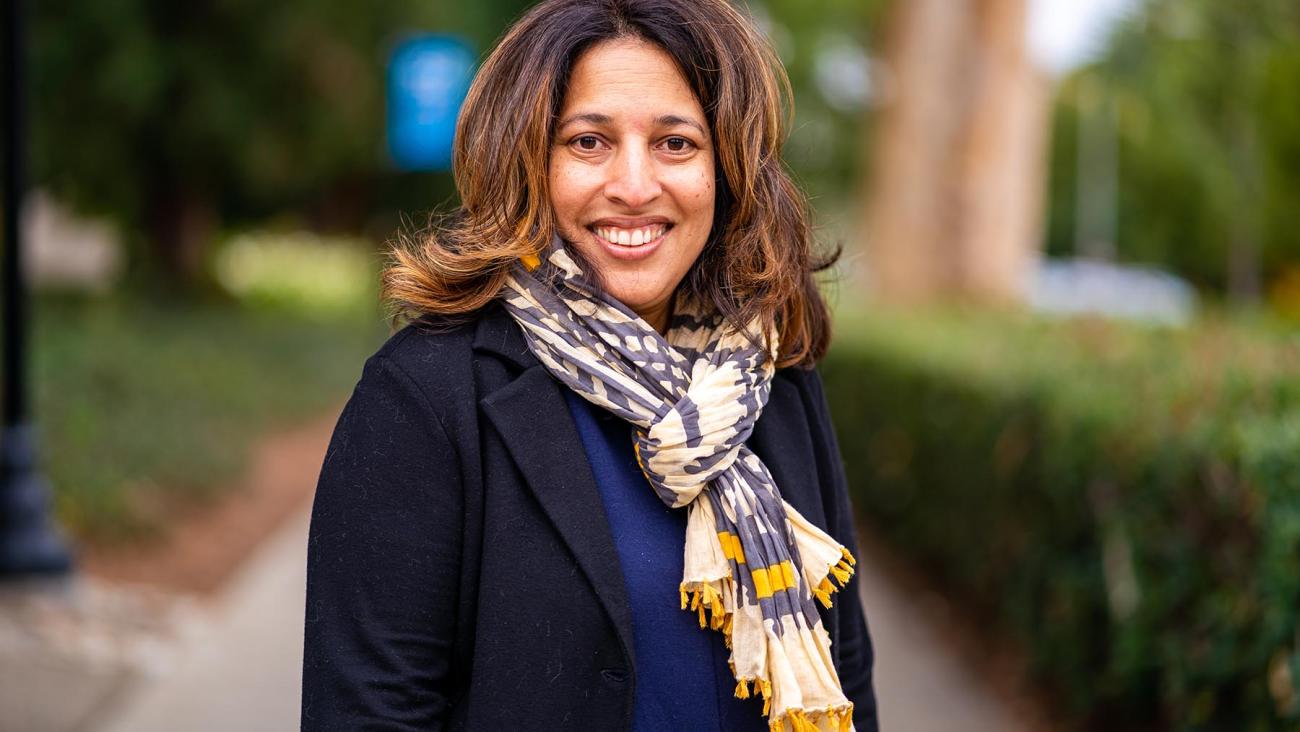 Professor Prageeta Sharma’s recently released collection of poems, Grief Sequence, has garnered acclaim from corners with cachet. In this, her fifth book, Sharma chronicles the loss of her husband to cancer and, as The New York Times put it, she “complicates her narrative away from sentimentality and into reality-fracturing emotionality.” We sat down with Sharma to talk about death, life and the poetry she made in the midst of it all. This interview has been edited and condensed for space and clarity.

What was the inspiration? It's loss but can you explain a little bit about it?

Sharma: This one is very different from my other books. My last book had a lot to do with race and thinking through the ideas of belonging and institutions and race and community and who gets to be a part of a community and who is outside of that community by the nature of racial differences and gender. But this one just happened because in 2014 my late husband Dale was diagnosed with esophageal cancer and he died two months after diagnosis.

And so, I was in shock and I had no sense of what had happened and, often they say with shock you lose your memory. So, for several months I couldn't remember our long marriage. I could only remember those two months of his progressing sickness. When I told my father, who’s a mathematician who specializes in math education, that I was having trouble with sequencing (because it was something I was starting to notice), he said, "Oh well, you've always had trouble with sequencing. I tested you when you were five or six." So it was sort of this joke we had about the concept of sequencing. It led me to research theories of sequential thinking; I started think about the process of sequencing events and what to do for your recall, and what you do to process trauma, deep feelings, and difficulty; I started to write in a prose poem format as much as I could: to place on a page what I could recall. And I was also doing that because I felt truly abandoned by Dale’s illness and death, which was very sudden. He died of a secondary tumor that they discovered after he inexplicably lost consciousness. So, I never had any closure.  I didn't get to say goodbye. We thought we had several months left and didn’t prepare for his death, we had no plans of action.

He was such a complicated person that, to not have had any last conversations just put me into a state of despair. It was an unsettling place, so I had to write myself through it and speak to him and document the days through my poems. And I didn't realize was that with such grief comes a fierce sense of loving—believing in the concept of love. Many people say this especially when they lose a spouse, they lost someone they loved, and they didn't plan on losing them so they're still open to the world and to love. They're still open to feeling feelings. So, I started to learn more about my own resilience and my strength, and I was really receptive to the process of becoming my own person. It was painful but I wanted to document the fact that I knew that when I was at a better place of healing I would feel very differently, and the poems might look different, which they did.

People talk about the stages of grief. Did you find yourself going through that as you wrote the poems?

Sharma: The joke is that you're always going through different stages so they're never linear.

No, no. They're not linear.

Sharma: So, I think I went through them all in a jumbled way. I think they hold you in them. Dale was a really complicated person, so I had to really think about who he was, who he is.  I learned you love two people at once--you stay in the living world but you still love the person you lost. Grief Sequence has many kinds of love poems. Towards the end of the book are love poems to my current partner Mike, a widower, who helped me through the grieving process.

Sharma: Yeah. The poems are about grief, love, and they're about really trying to learn to trust the journey. These poems have taught me so much about my emotions, sequencing, and my community.

Is there a particular poem in "Grief Sequence" that really gets to you or pierces through all of it for you? Is there a pivotal poem in there?

Sharma: I think that there are a variety of poems here. Some poems are processing Dale getting sick. Some are processing experiences with others that are sort of surprising—people can alienate you when they witness you in deep grieving, because some gestures or reactions aren't pleasant I began processing what gets in the way of your grief. We can sometimes get hijacked by other people's treatment and you forget that you're really spending this time trying to just protect your feelings. Speaking to widows really helped me. Reading all the books I could find helped; my biggest joke is that the book that helped me the most which...I mean, it's sort of embarrassing but it's hilarious, is Dr. Joyce Brothers' "Widowed."

Sharma: It was so practical: you have to learn how to shovel the driveway, relearn the basics. It was all of these lists. These basics are the ones that people don't talk about: the shared labor you have with your partner and what you then have to figure out after their death; for example, my cat brought in mice and I didn't realize how often Dale would handle that. Things like that. So, the book was so practical that I just remember reading it cover to cover. I laughed so much when I recognized myself in there.

Those day-to-day gaps that you don't realize you're missing.

Sharma: Make sure to eat breakfast. Try to get enough sleep. So many basics.

When you're in grief I'm sure all those...you need it.

Sharma: All those things, yeah.

What did you find people's responses are to the poems? Did you find that people expected you've gotten over it now that you've written this book?

Sharma: It may be the book, it may be also including a new relationship in the book. I never understood how somebody could move forward, but you really understand it when you have no choice. I think the book helped me document the experiences in real time. Readers have been very generous. I think they didn't expect the book to be so explicit. One thing that I was also trying to negotiate in the book was poetic forms; because I've taught creative writing for a long time and we teach form, and particularly the elegy I was reacting to the beauty of the elegiac poem; it can be so crafted that often you're not feeling like it’s an honest form to hold tragic grief. You can write a beautiful elegy in a certain way, but the tragic losses some of us can experience, or lots of us, may not produce a beautiful poem and that beauty can be something that almost feels false to access. And so, I started to question the role of how the poem works or what people expect to read as an elegy.

Talk about some of your early influences in terms of poetry.

Sharma: I think I started writing poetry in high school like lots of people and so I was really fascinated with what contemporary poetry looked like, reading it from "The Norton Anthology of Poetry." And I think about it now and I was often interested in women writers of color, though they were very few. And then I think some women who were writing "poetry of witness" and kind of trying to figure out what their narratives in the poems were about.

Can you explain "poetry of witness"?

Sharma: According to many poets, it is poetry that feels it is morally and ethically obligated to bear witness to events and injustices like war, genocide, racism and tyranny. Many poets I read during my high school years who wrote about these events bore witness to it in other countries and often about cultures outside of their own. It led me to wonder and examine the distance between their testimony and the culture itself. It also forged the desire in me to read more internationally and in translation rather than through this particular style and method of writing.

When did it crystallize for you that you wanted to be a poet?

Sharma: I felt like it was a calling back in college but I think it was really applying to graduate school right from undergraduate and getting into a top creative writing program (also getting a fully funded scholarship). I was 21 years old and I just thought, well, this must mean something. And then when I got to grad school, I found a community of poets and that felt right to me. I am so grateful to those people—many are still very close friends today.

Onetta Brooks '74, past president of the Alumni Association Board
END_OF_DOCUMENT_TOKEN_TO_BE_REPLACED
© 2020 Pomona College