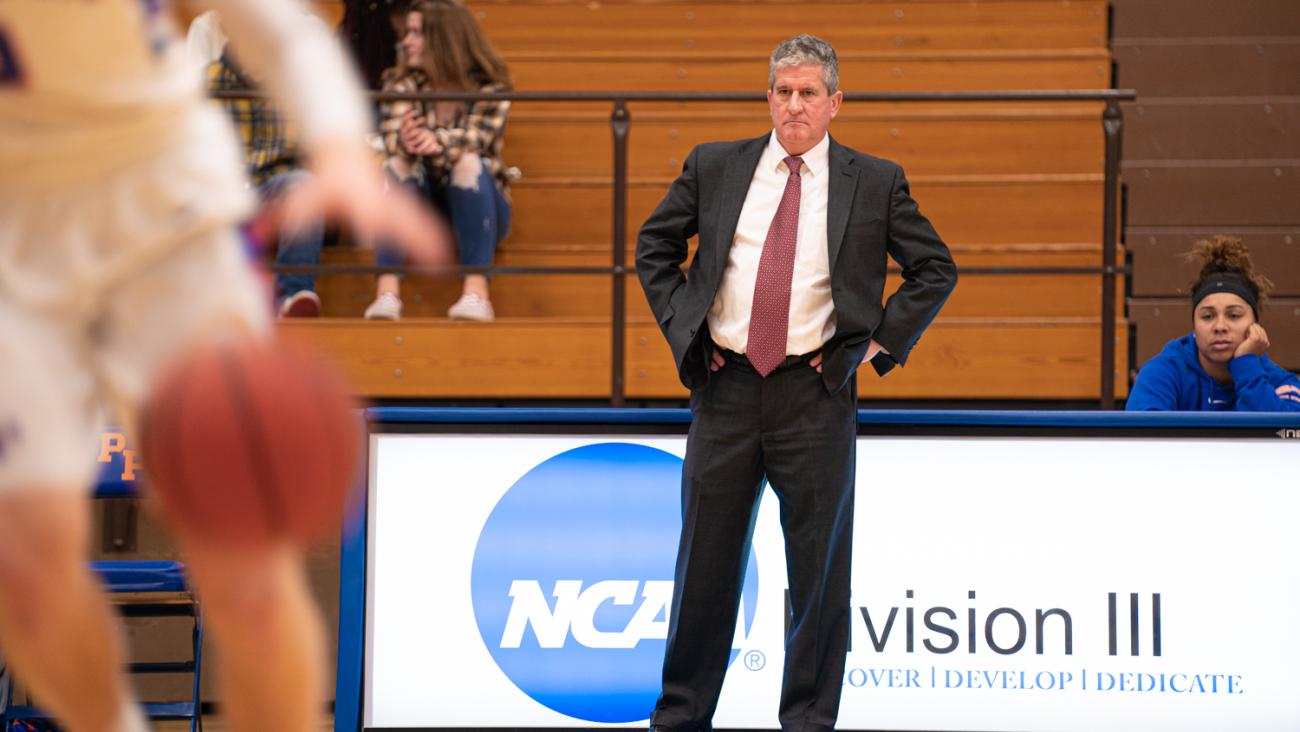 It’s little surprise that the week before his milestone victory against Cal Lutheran, Katsiaficas didn’t know when it might come or have any opinion on where it would rank among the most important wins in his 33 seasons as Pomona-Pitzer’s coach.

That’s because the biggest win in his mind is usually the last one. Or the next one. (And by the way, the Sagehens have won 12 of their last 13 on their way to a 12-3 start.)

“I think it’s hard for any coach to get outside of the current moment... moving on from the last game, preparing for your next game,” Katsiaficas says. “I can say, however, those questions and conversations definitely shine a spotlight on all the remarkable young men that have left their mark on our program through the years.”

The wins have piled up, but the old saying “winning isn’t everything; it’s the only thing,” doesn’t exactly apply at Pomona-Pitzer—not like at one of those basketball powerhouses where a coach on a losing streak might see a For Sale sign sprout in his yard.

“I think in Division III in general, and particularly at Pomona-Pitzer, our mission as a coach is really to help educate and prepare these student-athletes to be successful after college,” Katsiaficas says, pausing for emphasis. “No one should misinterpret that: Me and our guys want to win so badly that our skin hurts.”

They have won plenty: The Sagehens have had winning records in 26 of his 32 seasons, with the 27thof 33 well on its way. They have won 11 Southern California Intercollegiate Athletic Conference championships and played in the NCAA Division III Tournament 11 times. Those 500 wins rank Katsiaficas 15thamong all active Division III men’s basketball coaches, and he has won more games than any coach in any sport in Pomona-Pitzer history.

Last season’s team was among his best, cracking the top 10 of the national rankings for the first time and setting a program record with 26 wins while advancing to the second round of the NCAA Division III Tournament.

Back in 1986, Katsiaficas was a Pomona-Pitzer assistant coach who got a chance to be interim head coach when the Sagehens’ coach, Gregg Popovich—now the five-time NBA champion coach of the San Antonio Spurs, of course—took a one-year leave of absence. When Popovich returned, Katsiaficas spent one season as an assistant at the University of San Diego before returning to take over the Pomona-Pitzer program in 1988, when Popovich left to become an assistant with the Spurs.

Plenty of things have changed since then. For one, recruiting is no longer a needle-in-a-haystack search with lots of phone calls and letters scouring for good players who were also outstanding students who could qualify for admission. Now email, scouting services that provide national recruiting reports and savvy students reaching out to Division III coaches make it easier to find a match.

Even some of the rules of the game have literally changed.

“He’ll sometimes say in our practices, ‘Well, before there was a three-point line….’” says Adam Rees ’20 with a little laugh. “That was a while ago. But he has a lot of expertise. We obviously respect him for a lot of reasons, but he just really knows what he is doing and has done it for so long that it’s really nice as a player being coached by him.”

Other things haven’t changed at all. Katsiaficas still wears a blue warm-up suit almost every day, says Rick Duque PZ ’89, a player on Katsiaficas’ first SCIAC championship team and now a dean of students at The Webb Schools in Claremont after many years coaching basketball. And Duque can still recite the way Katsiaficas ends a team meeting as precisely as current players like Rees and Alex Preston ’21.

“Every time he ends his little spiel he always says, ‘Anything, from anyone, about anything?’ It’s opening it up for questions, but it’s that way, that tone, every single time,” Preston says.

What else hasn’t changed? “His love for passing on his knowledge,” Duque says. “And how important it is to give it all you can—which is only 100 percent. He never believed you could give 110 percent. ‘No, you can just give 100. You can’t give more, but you can give it your all.’ And that he cared about us as individuals. Understood that, yes, we love to play basketball but there’s going to be more to us than just basketball players.”

A Life in Coaching

They are basketball players who graduate and go on to the same wide array of successes as other Pomona-Pitzer students. A few become coaches, and Mike Budenholzer ’93 certainly hit it big, as coach of the Atlanta Hawks and now the Milwaukee Bucks.

But there are others, too, teachers and coaches like Duque, Troy Roelen PZ ’92 of Mission Viejo High School in Orange County, Ray Portela’99, who has won a couple of Arizona state championships at Sunnyslope High in Phoenix, and Gavin Cree ’04, who teaches and coaches at Mercer Island High in Washington. Another former player, Alex Lloyd ‘06, is an assistant coach in the NBA G League, a developmental league.

“There are those who you see coaching traits in and that you could imagine becoming a coach,” Katsiaficas says. “But you never know what path they will take, or whether they may pursue a teaching and coaching career. The kids we have here have so many different varying aspirations and they're so talented and motivated. I think it's nice when they do get into teaching and coaching because of the impact they can have as a mentor. There is nothing more valuable than a really good teacher or coach.”

“Coaching college basketball is a very competitive profession,” Katsiaficas says. “It is pretty amazing to see how the money and salaries at the higher levels have exploded over the years. But it can also be a real ‘rat race’… job insecurity, changing jobs, addresses, and cities every few years, and maybe never quite finding that opportunity where you can lay your hat and settle in.”

Katsiaficas has stayed, and he and his wife Jennifer live in Claremont and send their two children, Charlie and Lily, to the local schools. Charlie is a sophomore on the Claremont High basketball team.

“I would have just laughed and thought, yeah, ok, if you want to think about that, fine, but I can’t imagine that actually happening,” Katsiaficas says.

Duque couldn’t have foreseen it, either.

“I mean, who knew that Coach Kat would stay there? But it tells you how much he loves the place, and how much he values what Division III athletics are all about, the student-athletes.”