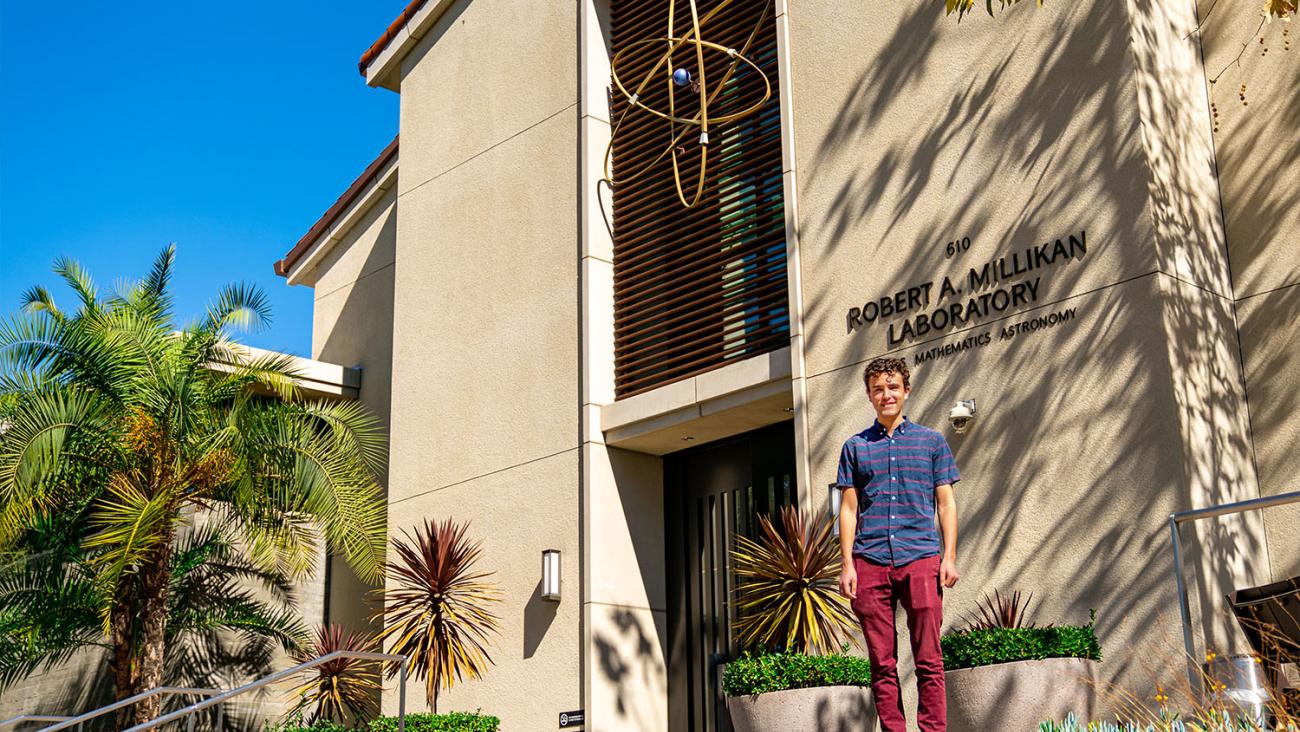 There have been many doors in the life of Yannai Kashtan ’20, beginning with the garage doors that housed his home science laboratory, set up when he was the tender age of 10. The experiments conducted there — and entire days spent in a lab coat, goggles and gloves — eventually led him to the doorstep of a Pomona College education with all its possibilities. And today he has arrived at his next, very prestigious door: a Knight-Hennessy scholarship, which is a full ride to Stanford University to pursue any graduate program of his choosing.

This is the first Knight-Hennessy win for a Pomona student. This is also the first award in chemistry in Knight-Hennessy history. The award criteria for winners include, “rebellious minds and independent spirits” and “future global leaders.” Kashtan is modest when asked how he fits that Knight-Hennessy bill, but his future chemistry Ph.D. research interests tell his story well. A double major in chemistry and physics with a math minor, Kashtan is driven by a desire to find a large-scale, carbon-neutral energy source to power the world. Toward that end, at Stanford he plans to study photoelectrochemical CO2 reduction with groups working on integrated artificial photosynthesis modules. His aspiration is to become a scientific leader working to solve the global energy crisis and fight climate change.​

Kashtan, who hails from Oakland, Calif., points to his homeschooling as a major factor in his independent thinking. It offered him the sheer joy of discovery. And he believes it gave him an unusual perspective of the interconnections between disciplines, and between learning and teaching. Building homemade rockets, putting out the occasional garage laboratory fire, performing in a professional play, road trips to Death Valley … all of it made for a richly textured educational experience. It also fostered a way of thinking.

“Homeschooling also taught me that a lot of adults’ advice to me and my parents … for example, along the lines of ‘Oh, you’re homeschooling, but have you thought about how he’ll get socialized? Won’t he feel isolated?’ etc. … was mostly grounded in fear of something different than they were used to. That has made me generally wary of accepting the status quo on its face.”

The extensive research Kashtan has done as an undergraduate student in collaboration with Pomona professors, the tutoring he has done at the College, in his hometown and abroad in Costa Rica, his internship at a biotech lab, are all evidence of his dissatisfaction with the status quo and his fearlessness when it comes to difference.

Pomona College Professor of Physics Janice Hudgings, Kashtan’s primary mentor, has not only been a tremendous support, but she has further cultivated that kind of dissatisfaction that great science demands.

“She also pushes me to collect that extra data set, to sharpen my writing that much more, etc. … She believes in me and pushes me to excel,” says Kashtan.

There was a still earlier push into the sciences. One of Kashtan’s mothers' years-long struggle with ovarian cancer, and the associated surgeries and treatments before her death when he was 16 years old, showed him both the power and promise of science. After his mother died, he knew science wasn’t just about discovery, it was also about determining to do good for others.

At Pomona, his life story and passions aligned. Kashtan says he chose Pomona because he knew he would encounter and share knowledge with equally passionate people from across the disciplines, as well as study science from all angles without sacrificing depth. With his double major, Kashtan certainly came at science from multiple angles. With events like the California wildfires of 2018 and a pivotal lab tour at Caltech serving as catalysts, he dove deep into research aiming to fight climate change.

“I found his lectures informative and entertaining and I have fond memories of walking into the Seaver lecture theater, sitting back, relaxing and enjoying the O’Leary show.”

Kashtan clearly loves science but he says he isn’t satisfied by a life lived solely in the lab. His aim is to be a boundary-crossing scientist, he says. And a mountain-climbing one. Early on at Pomona, Kashtan was very active in On the Loose, the outdoors club at The Claremont Colleges, leading trips to several nearby mountains and slot canyons by the Salton Sea.

Kashtan would remind incoming students that there is no “right way” to do college, even if parents, teachers and adults have regrets, worries about their students’ futures, their own insecurities and lists of “shoulds.” All of that affects the advice they give, he says. What’s important is to heed your instincts.

“Pay attention to the people you trust, but also trust your own sense.”