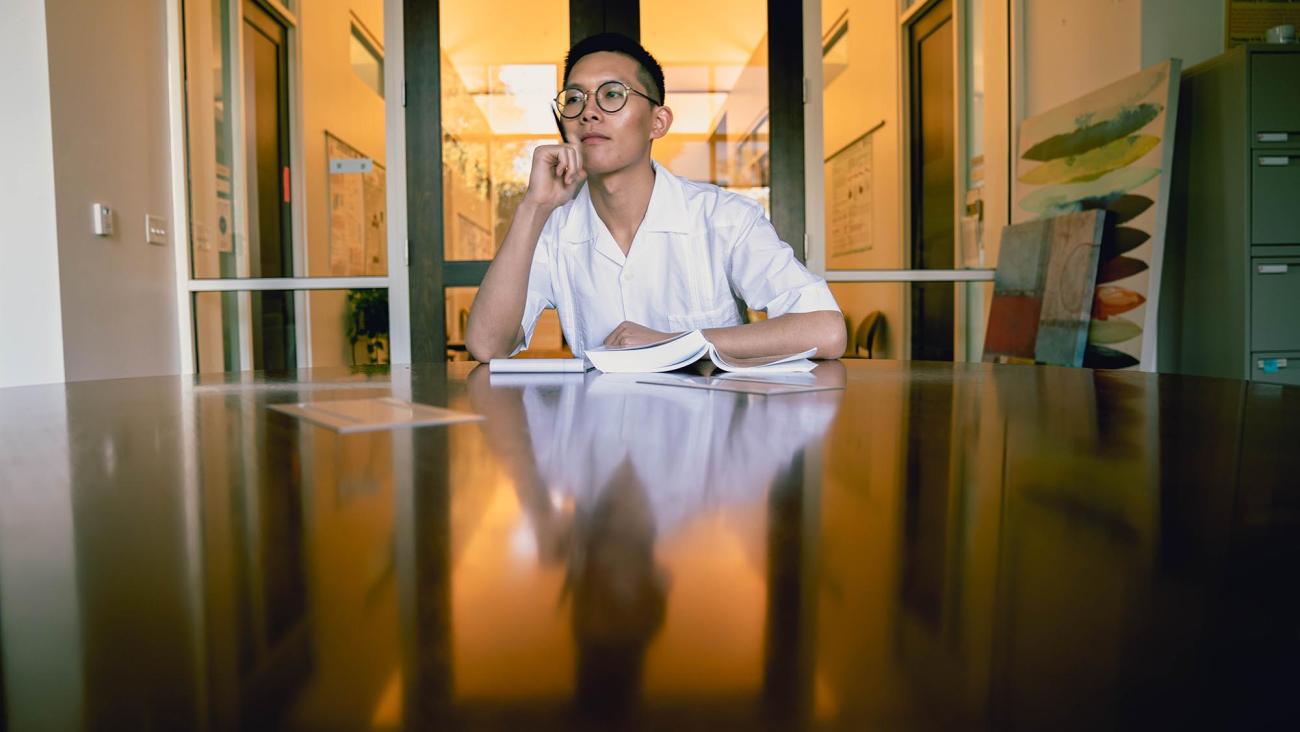 Franco Liu ’20 had never heard of the field of linguistics before coming to Pomona College. An international student from China, Liu was interested in exploring gender and women’s studies – but as fate would have it, by chance he ended up taking Introduction to Linguistics taught by Professor Michael Diercks during his first year of college. The experience ended up being “serendipitous,” Liu says.

A linguistics major today, Liu seems to have taken every single course offered by the department. And not by chance, but due to his own hard work and a strong support network of faculty and friends, Liu was recently awarded a prestigious Downing Scholarship to study at the University of Cambridge for 2020-21. He plans to pursue a master’s degree in linguistics.

The Downing Scholarship award will cover Liu’s tuition, fees, living expenses and round-trip travel, as well as a stipend for books, local travel and personal expenses. The program is a special arrangement between Pomona and the University of Cambridge’s Downing College.

All it took was one semester of introductory linguistics and an ID1 course called Language and Gender with Professor David Divita, and Liu was hooked.

Not only hooked, but he fell in love with syntax, the study of principles and rules that govern word orders in a certain language, or as he calls it, “the more nerdy part of linguistics.”

“I'm also still interested in how we use language at our disposal to communicate and negotiate different facets to our complex identities, such as gender,” says Liu.

By his junior year of college, Liu had completed all requirements for his major. He compares the experience with playing Pokémon Go: “It's hardly an ordeal for me to take those classes. I've become so close to the professors and also the community of student linguists here, so of course I’d want to see them in class every semester!”

After his year in Cambridge, Liu plans to pursue a Ph.D. in linguistics because he has enjoyed researching, teaching and mentoring during his time at Pomona. “I kept on taking these classes and then I became the mentor for those classes. Through all the mentoring, all the learning inside and outside the classroom, I don’t think I’ll ever want to leave a school setting. Teaching is definitely my end goal.”

Prof. Diercks adds, “It is always noticeable when Franco serves as a T.A. for my course, because many fewer students come to me for help because he is able to guide them so well during his own office hours.”

Making the Most of Every Summer

Liu has already acquired plenty of research experience during his four years at Pomona that will serve him well in his postgraduate studies. Thanks to Pomona’s Summer Undergraduate Research Program (SURP), Liu spent summers 2017 and 2018 working under the wing of Prof. Diercks, who is also his advisor.

“Franco is extraordinarily thorough in his work and is one of the highest-energy students I've ever taught,” says Prof. Diercks. “His enthusiasm and passion stand out.”

During Liu’s junior year, the Oldenborg Center for Modern Languages at Pomona awarded him an Oldenborg International Research and Travel Grant. With the grant, Liu took the opportunity to travel to Mahanga, Kenya, to do on-the-ground language documentation of Tiriki for a month. Liu was able to meet the language consultants that he and Diercks had been working with over the years and he stayed with a host family that not only helped with his research but introduced him to one of his new favorite foods: chapatis.

“They taught me how to make chapatis. I still try to make it every Sunday at my professor's house,” says Liu, who has dinner with Professor Diercks and his family almost every weekend.  “We all share this avid love for chapatis. I have one in my fridge right now.”

In Kenya, Liu amassed quite a collection of data that he says has helped him formulate the research questions for his senior thesis. “I got a humongous amount of data that I could work with and, interesting patterns just kept on emerging from the wealth of data that I had collected, even to this day. I think I will be able to keep myself busy for the next three years at least.”

Liu is presenting his thesis research on object marking in Tiriki at the Annual Conference on African Linguistics (ACAL) at Rutgers University this May. He also presented preliminary thesis research last fall semester at the Southern California Annual Meeting on Syntax (SCAMS) held on campus and at the Afranaph Workshop at Georgetown University. In January, Liu and his classmates in Professor Robin Melnick’s Topics in Quantitative Linguistics course presented together at the Annual Meeting of the Linguistic Society of America (LSA).

“I’ve just gotten really lucky. It’s never just me. It's always the people around me, especially my professors,” says Liu of the accomplishments and research experience he has obtained while at Pomona.

Diercks adds, “Franco not only has carried out fieldwork in Kenya supporting my research, he has also co-authored drafts of multiple book chapters on research projects we're working on – I’ve somewhat lost count but I think his current count is eight. We're currently collaborating on solving a research problem I've been working on for over a decade; it's been extraordinary to have a collaborator on campus to work through the issues with.”

Liu, who also leads tours for the Office of Admissions, says he is often asked about his favorite thing about Pomona and what his experience here has been like. “I always preface my answer: ‘You know, this is going to sound very corny, but I have found a home here and I'm really thankful for the people around me.’

“I think that sentence carries more weight since it comes from the mouth of an international student. It was very difficult for me to adjust to life here initially because I didn't grow up with Instagram and all the slang and cultural references. … I had to go through this transition and culture shock, but it was a lot easier than I had thought it was going to be. Thanks to my sponsors, the linguistics community – from the academic coordinator to the students, everyone – and being able to share this very personal bond with my professors like Prof. Diercks. I eat at his house every week! I mean, I celebrated Christmas with his family, I know his baby, his baby knows my name, which is incredible. I even know his cats!”

Liu’s last piece of advice for incoming and current Pomona students would be: “Surround yourself with people who fan your flames, I'd say. Like the linguistics cohort and the support group that I've found here. And also, just make great use of the resources that Pomona has to offer.”

Onetta Brooks '74, past president of the Alumni Association Board
END_OF_DOCUMENT_TOKEN_TO_BE_REPLACED
© 2020 Pomona College