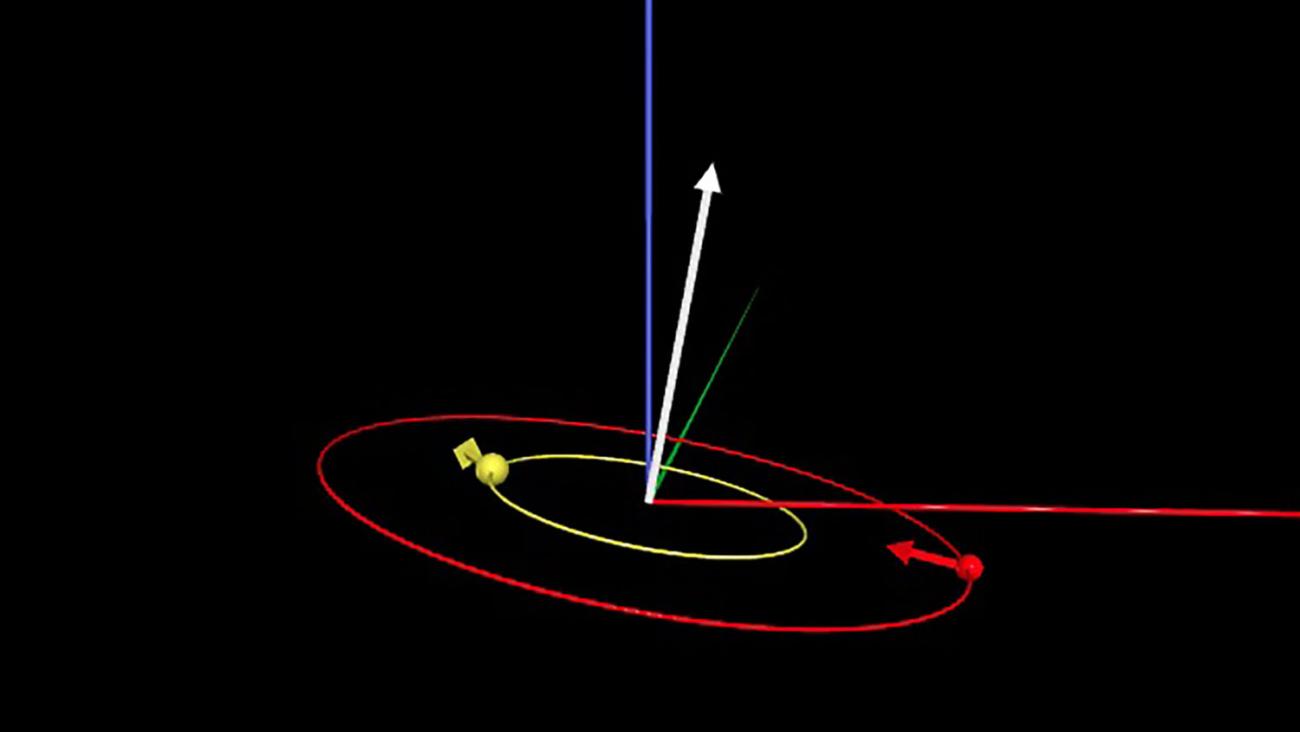 Story Date:
The image is a partial computer screen capture from a project modeling the effects that spinning binary stars exert on each other.

Professor of Physics Thomas A. Moore has received a $145,223 grant from the National Science Foundation (NSF) to develop, test and share a computer application that simulates how future gravitational wave detectors would react to binary star systems.

Moore’s three-year project, “Adding Spin to a Gravitational Wave Detector Simulator,” will create undergraduate summer research opportunities beginning in 2021 that expand on his work with Yijun "Ali" Wang '19, now a graduate student in physics at Caltech.

The project was “partly inspired by the interest that a lot of my students have because of the recent detection of gravitational waves,” Moore says, referring to the historic 2015 observation that led to the 2017 Nobel Prize in Physics for Rainer Weiss, Barry C. Barish and Kip S. Thorne.

“Gravitational waves are tiny ripples in space and time that Einstein himself thought people would not be able to measure,” Moore says. “But now they have been measured and that promises a lot of interesting astronomy to be done in the future. I've likened it in a public talk to growing ears where you only had eyes before. It gives you a whole different way to sense the universe.”

The 2015 observation of waves created by a collision between two black holes was accomplished through the Laser Interferometer Gravitational-Wave Observatory, or LIGO, which consists of two U.S.-based facilities, one in Hanford, Washington, and the other in Livingston, Louisiana. Each facility has two arms that stretch 2½ miles in different directions and use vacuum systems, lasers and mirrors to detect gravitational waves.

Moore, who has taught physics at Pomona since 1987, has been particularly interested in a planned space-based gravitational wave detector known as LISA, for Laser Interferometer Space Antenna, and notes that a detector built of satellites would have certain advantages over those on Earth.

“You drive a truck past one of these and the earth is going to be shaking a lot more than these very, very weak gravitational waves. And that's why you have multiple detectors, because if you get the same signal in Louisiana and then Washington, then you know it wasn't a truck,” he says. “The Earth itself is jostling all the time or there are earthquakes and shifting around of the mantle and so on. Those vibrations cause much louder signals than the gravitational waves you're trying to detect, especially at lower frequencies.

“The downside with space-based detectors is that once they're up, they better work. At least with the ground-based detectors, you can go in and fiddle with it if something's wrong.”

A model allows scientists to evaluate potential designs before undertaking such massive projects. Though Moore’s simulator started as a model of the LISA detector, the goal has expanded to creating a simulator that could be adapted to various ground-based or space-based detectors.

“You just basically swap in a new set of parameters describing the new design and use the model to see how well it will work,” he says.

The NSF grant is Moore’s first, and he says he is grateful for the guidance of Associate Dean David Tanenbaum and especially Director of Sponsored Research Dean Gerstein.

“Dean’s knowledge about how to craft the proposal made a huge difference,” Moore says.

The grant includes funding for an undergraduate research assistant for each of three summers from 2021-23, and Moore expects to add additional researchers through Pomona’s Summer Undergraduate Research Program (SURP).

The author of three physics textbooks, Moore has a deep interest in physics education, and has made public outreach a component of the simulator work.

“A significant part of this project is to prepare not only the model for public use, but also to provide some teaching materials on the kinds of things that went into the model, the sort of physics of the binary star systems and how they're generating gravitational waves,” he says. “How you detect gravitational waves and how you're going to use that information to gain understanding about the universe, things like that. We're also going to have a website surrounding all of this. Ultimately, that will provide a lot of teaching resources for people at the high school through the graduate level.”