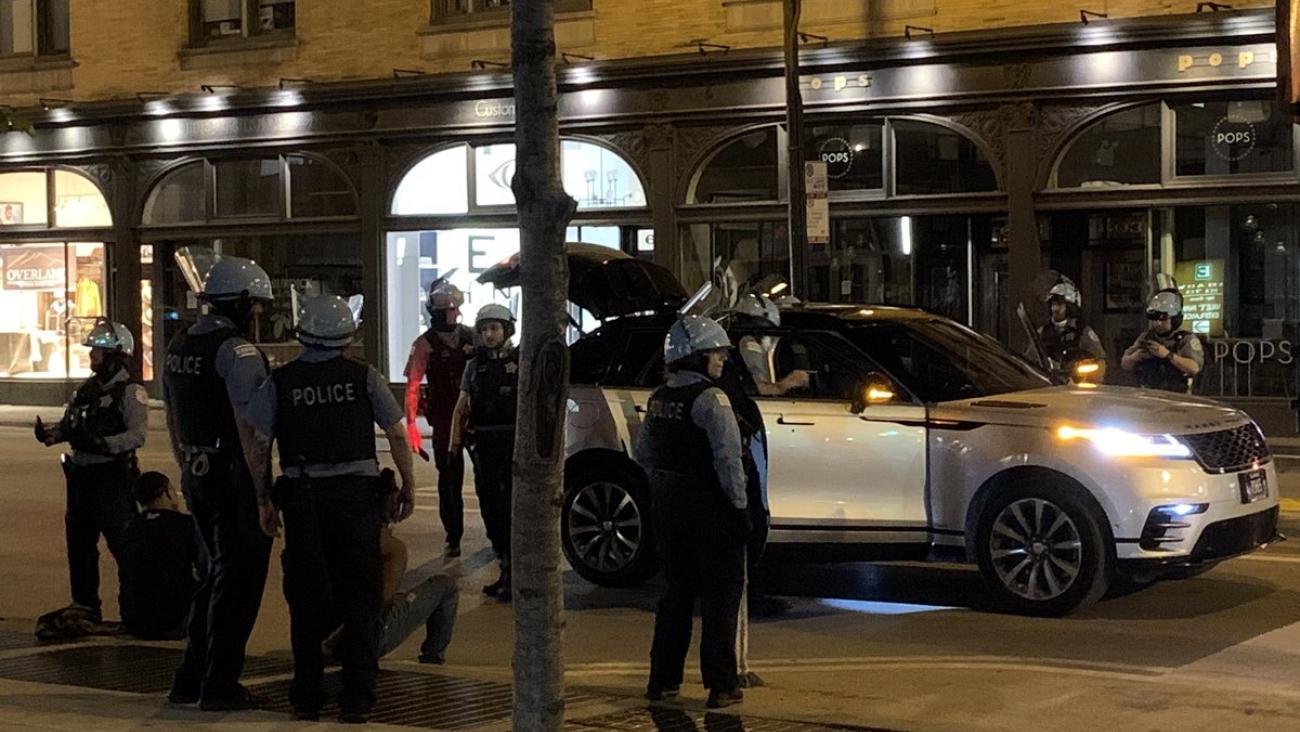 Journalist Sam Kelly ’18 works nights for the Chicago Sun-Times, 8 p.m. to 4 a.m. on weekdays, 4 p.m. to midnight on weekends. A reporter on the 24-hour breaking news desk, he covers whatever happens when night falls on the city. “Mostly crime, accidents, or it could be weather, it varies from day to day,” he says.

When protests, confrontations with police and rioting unfolded across the country after George Floyd was killed in police custody in Minneapolis in late May, Kelly—who grew up in Chicago and went to Pomona College as a Posse Foundation Scholar—was sent to report from downtown Chicago. “I put my bike on the bike rack of my car, I parked outside of downtown and then I biked in,” he says.

Alright, I’m out for the night. Write up for the day is below, courtesy of the @Suntimes teamhttps://t.co/F8a5FZnLQa

Posting photos, video and snippets of what he witnessed on his Twitter feed @sgonzalezkelly, where his editors, colleagues and the public could see them, Kelly interviewed people on the street. Then he paused in a safe place every hour or so to send longer dispatches to the office, where they became part of the Sun-Times coverage that shared his byline. (See more stories on his profile page.)

Among the things he witnessed were a police car in flames, police tackling a man and hitting him with a baton, an officer spitting at a protester’s feet, and crowds rushing into a currency exchange after the glass had been smashed. Kelly captured what unfolded with an eye, ear and even a nose for detail.

On the job at the Sun-Times for only 16 months, Kelly previously had focused on coverage that included arts, music and sports. A media studies major at Pomona, he was program director and music director at KSPC 88.7 FM, a writing and editorial assistant in the College’s Office of Communications, and an intern at The Daily Show with Trevor Noah in New York one summer.

After graduating, Kelly worked for nine months as an arts and culture reporter on Chicago’s West Side for Free Spirit Media, a training organization for young journalists. He has covered crime scenes in his current job, but suddenly he was witnessing unrest unlike any in Chicago since 1968.

“It was the first time I’ve covered anything like this,” Kelly says. “To be honest, on Saturday night I was in a rush to leave and forgot my press badge.”

Faced with returning home for his credential and possibly missing the news that was unfolding, Kelly went into the fray without it.

Seconds after tweeting this, I watched a group of cops tackle a man and hit him with a baton. One officer was goading protestors pretty heavily pic.twitter.com/sGQNwb9UFH

“The only times I ever felt unsafe were when I got caught in the middle of skirmishes or potential skirmishes,” he says, though the sound of fireworks and other unidentified explosives could be startling. “There were a lot of times when protestors would start to congregate near cops and maybe a few rocks would be thrown. The police, it was obviously their plan for diffusing the situation—and it worked pretty well for them—just to run in a line at the protestors. Every time that happened, the protestors would turn around and sprint back down the street. I knew in those moments the police wouldn’t distinguish me from anyone else, so I had to run with them.”

Much of what Kelly saw was “not very surprising, to be honest,” he says. “I understand the history of police in this country and Chicago especially. I’ve lived here my whole life. I understand that tensions are really high among protestors and among police. I work with police every day in my job, as far as my usual reporting, so I wasn’t surprised to see them responding that way.

Larger standoff near Grand and Dearborn, a few rocks thrown but mostly peaceful. Cops sprayed pepper spray into the air but seemed more like a threat than an attempt to hit anyone. Someone playing Lil Uzi off a big speaker. pic.twitter.com/vDmWO1E4om

“I have a lot of personal feelings about the police relationship with black communities and communities of color and impoverished communities, but I have to put those aside as a journalist and just report what I see as accurately as possible and try to let justification or lack of justification for any actions make themselves clear without inserting myself into the situation.”

Though he doesn’t have a clear plan for his career yet, Kelly landed the position at one of Chicago’s two storied newspapers in the middle of a changing era in journalism. Reporters face not only a drastic decline in jobs but also intensifying attacks on the news media.

Made my way up to Michigan Avenue, no lie it reeks of perfume pic.twitter.com/CNr1twvEwY

“It bothers me to see the way Trump talks about the press and the attitudes that people have developed about the press. I think when journalism is done correctly, it’s a valuable resource to our community, to our society,” Kelly says. “That being said I understand the frustration that a lot of communities have with the press, communities that may have been misrepresented historically. I don’t necessarily hold it against anyone who has those convictions in good faith.

“I have seen a lot of things on social media about journalists who are coming under attack at protests. And it is infuriating, absolutely, and it makes me upset. But I also think a lot of the journalism community is making this about themselves, and that bothers me as well because the communities that are protesting have been dealing with that violence forever, for generations.”

As multiple crises converge, including the coronavirus (COVID-19) pandemic, Kelly says he is “concerned about the state of local journalism in Chicago and around the country.”

The Sun-Times, largely locally owned, has not had newsroom furloughs, but the largest shareholder of the Chicago Tribune is the hedge fund Alden Capital.

“The Sun-Times has been doing relatively well,” Kelly says. “Our main competition, the Chicago Tribune is a storied institution, one of the most important newspapers in our country, and everyone on their staff is taking three weeks of furlough over the next couple of months.

“What an awful time to be furloughing your employees, in the middle of two of the most important newsworthy events of my lifetime.”

The news never stops, and Kelly says it will be a while before he processes what he has seen.

“I haven’t really had much time to sit with all of this.”