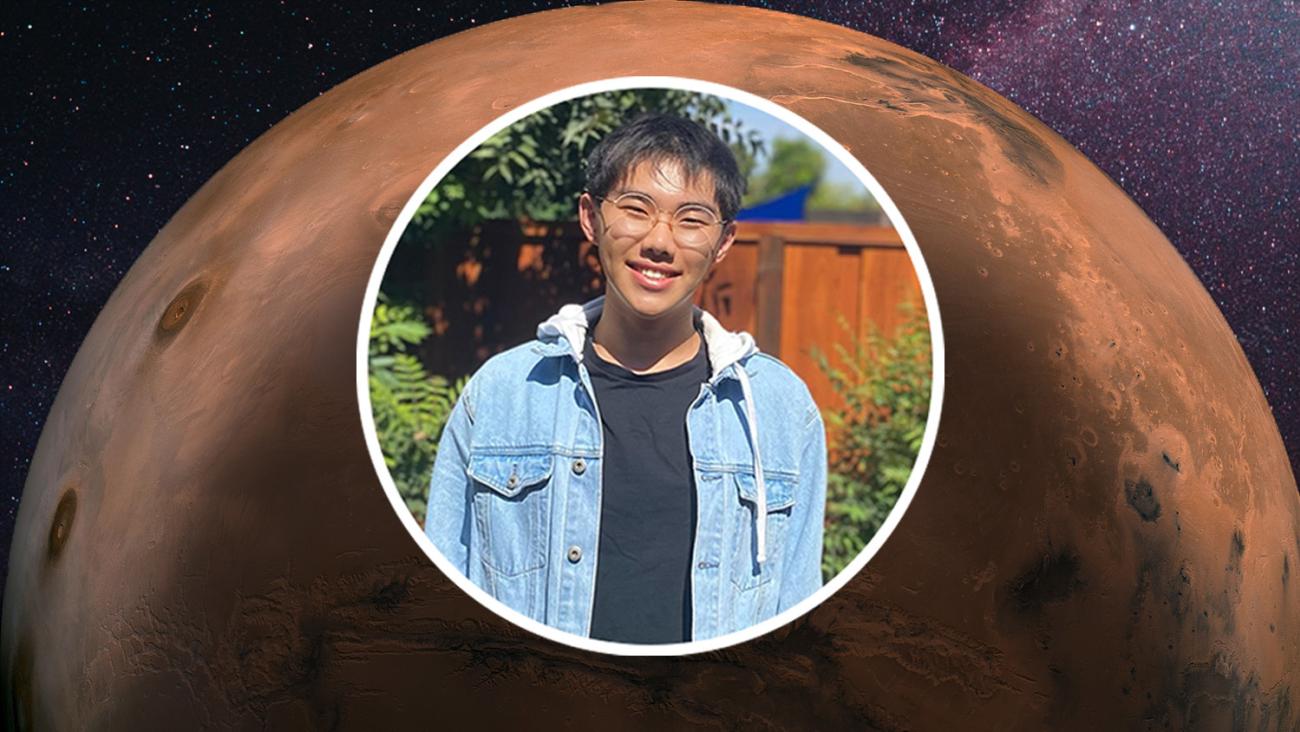 Even before the launch of his Pomona College career, Mason Cai ’24 has already taken off into the universe of research, thanks to an internship and co-authoring a paper that was presented at an aerospace conference. The work was part of a project assessing the possibility of turning Mars into a habitable planet like Earth.

MarsB, the operation Cai interns with, is a large collection of Microsoft Excel models, each with a specific function, that together create a vast database of calculations and information used to analyze questions—in this case whether there’s a way for humans to live on Mars. While Cai’s MarsB internship with the Cupertino, California-based research group was informal—no hire, no pay and found through a family connection—it was informative. The project Cai worked on was about the feasibility of an artificial magnetopause construction on Mars. (A real magnetopause is the boundary between a planet’s magnetic field and the sun’s solar wind.) This would shield the atmosphere of Mars from the sun's solar wind. That wind has been stripping the atmosphere that otherwise would have possibly made Mars inhabitable.

As researcher, Cai joined meetings and discussions about problems and concerns the team had, and then split off to do a lot of Googling, formula-deriving, individual thinking and then communicate results at follow-up meetings, he says. When Google and textbook searches came up empty, Cai designed smaller experiments to get a lead. Generally, he focused on physics and mathematics, whereas others looked into biology, geography or technology. While the internship arrangement may not have seemed official, the outcome was professional: Cai is a co-author of a paper on MarsB research that was presented this year at the IEEE Aerospace Conference in Big Sky, Montana, and he is working with the group on future academic papers.

Cai says his internship was a huge growing and maturing experience. But initially he lost all of his confidence in what he thought he knew about physics and math because everything was so different, he says. Quite unlike a classroom, “there was no right ‘answer’ to anything.”

“The grand goal of the project—turning Mars into Earth—was so intangible and dreamlike. I spent most of the project just learning and asking questions and was very insecure about my place in the team and the fact that I was not actually contributing much, especially in the early stages.”

However, through conversations with the other researchers, Cai says he realized that it's OK to not know things. Over time, that blow to confidence became a boost. He started making suggestions that were implemented and went on to solve a critical problem with a new method that the group had struggled for months to solve. Due to a non-disclosure agreement, Cai can’t go into specifics.

“I definitely gained a much healthier mindset in which I now value the process more than the result,” he says.

Months of grappling with the project fulfilled a lifelong love for Cai. This graduate of Leland High School calls San Jose, Calif. home, but outer space has long occupied his head space.

“I was always fascinated by the idea and possibility of extraterrestrial life from a young age. Science fiction and fantasy that ranged from Tom and Jerry in space to ‘2001: A Space Odyssey’ definitely fueled my interest in space. Also, in high school, my favorite, most confident-in subject was physics, so I was eager to apply it to something more legitimate.”

Cai’s internship and research with MarsB reaffirmed his interest in the STEM fields, especially math and physics, and astrophysics specifically. But in true liberal arts spirit, he has an open mind. For Cai, Pomona College is a galaxy yet to be explored.

“At Pomona, I hope to do and learn a lot more about the different types of physics. I want to participate in more research on all types of topics. I hope to find more experiences like MarsB at Pomona where everyone can collaboratively learn and grow while working towards our overlapping goals.”