Aseal Birir '18: Africana Studies Will Make Me a Better Doctor 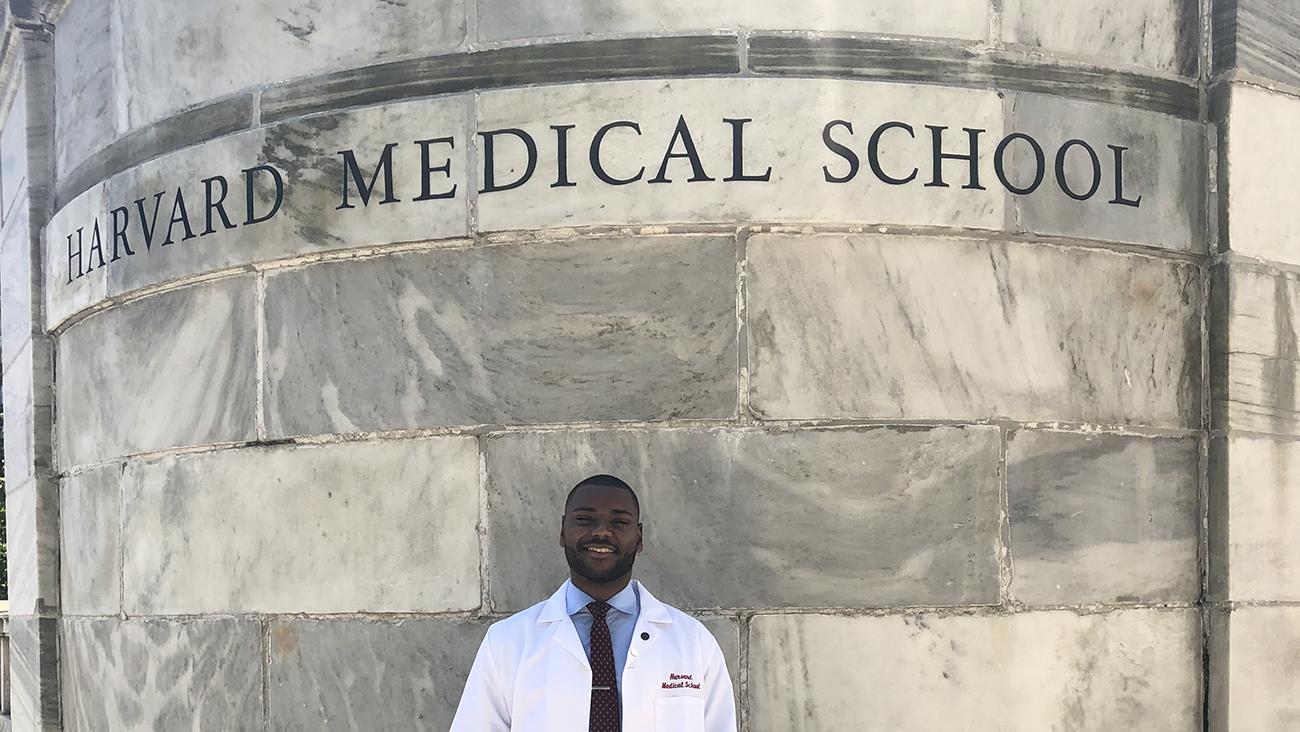 Aseal Birir ’18 and his mother and brother left their home in England for his mom to remarry. But living on American soil did not go as expected for the Sudanese family. The new marriage ended. Finances were a struggle. And at a young age Birir came to searing realizations of what it means to be a Black male in the U.S.

Imprinted on his consciousness soon after he moved was a trip to the store with his mother, when he witnessed her being ridiculed for her heavy accent. For Birir, that was an early education. Still to come in the ensuing years were racial epithets and a confrontation with what it means to be a large black male athlete in America.

Even though he was a chemistry major at Pomona College, Birir was stirred to take Africana studies by the racially charged events in the nation at that time, including the Freddie Gray protests in 2015, coupled with his own lived experience. Now a Harvard Medical School student, he says those classes (Intro to Africana Studies and Africana Political Theory) helped him gain a greater appreciation of his multifaceted identity as a Black, African, Muslim, immigrant, low-income male—identities that he perceives as constantly under attack by Western media.

“The most important takeaway was learning about how different marginalized groups are oppressed and that many of these forms of oppression are ingrained in societies’ institutions.”

Breaking out of a Eurocentric perspective not only affirmed the value of his identities, it broke through a learning blockage as well.

“I think the self-realization I had was how much this self-conflict had impacted me academically. Early on, I struggled in middle school and early high school in large part because I never believed someone with my identity was supposed to do well,” Birir says.

He wanted to ensure that others would also come to this consciousness. While a student at the College, he volunteered weekly with the Young Men’s Club, mentoring Black and Latino boys at a high school in the city of Pomona. The program’s mission is to demonstrate to these young men of color healthy representations of manhood, responsibility and goal setting.

“Many of the students I worked with faced similar challenges to me as they tried to reconcile their identities with a society that routinely questioned the value of them – especially in 2016 during Trump’s election. Helping the students overcome this reinforced the importance of making sure people’s unique identities are appreciated—similar to how the class did so for me.”

Birir not only reconciled his identities, he reconciled his interests as well. His pursuit of medicine is a coupling of passions: social justice along with science and research. His background and academic experience have made him acutely aware of how people’s positions in society affect their lives, he says.

“To me, medicine is the combination of these interests while also providing the greatest opportunity to impact the most people since healthcare is a universal need but currently isn’t provided in such a way.”

He says Africana studies has empowered him to care for a diverse patient population and caused him to recognize that to treat those patients requires “a broad understanding of who is oppressed in society and what unique consideration must be taken to provide the best care for individuals. Especially when countless studies and the current pandemic have highlighted that one’s social position is deeply linked to their health.”

Recently, Birir issued a call to students of The Claremont Colleges via an open letter in The Student Life newspaper, urging them to all take an Africana studies course and be emboldened in thinking and acting in ways that counter inequality. He wrote that “working in inequitable fields without goals of equity in mind is to propagate those failures.” He challenged students to think of novel ways to change systemic inequities.

Healthcare is Birir’s calling and mission.

“If I were to only provide the best care for the patient in front of me, I wouldn’t be doing enough to dismantle systemic inequality,” he says. “More simply, Africana studies provoked me to ask how I can care for groups of people affected by structural inequalities rather than just individuals.”

Onetta Brooks '74, past president of the Alumni Association Board
END_OF_DOCUMENT_TOKEN_TO_BE_REPLACED
© 2020 Pomona College