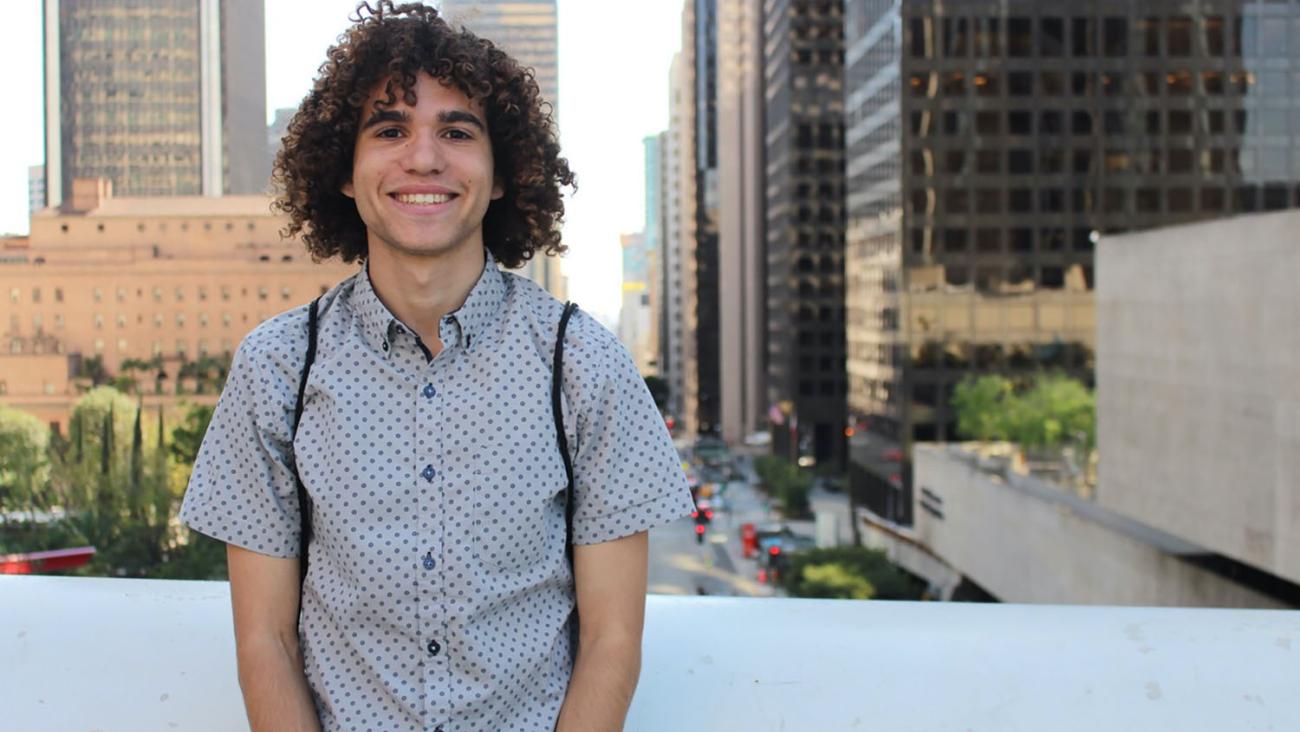 Less than three months after earning his degree from Pomona College in May, Kellen Browning ’20 had his first front-page byline in The New York Times.

Since that August story about a 17-year-old gamer now facing charges in a scam involving a Twitter hack of some of the most famous people in the world, Browning has continued to churn out bylines for the Times. The topics have been as varied as the Northern California wildfires, the soaring fortunes of tech companies such as Zoom and Peloton during the pandemic, and a tiny Amazon Ring drone that patrols the inside of your house, filming video.

Based in the Bay Area as a technology reporter for the Times business desk, Browning is one of 35 early-career journalists hired to coveted full-time, one-year positions as part of  the paper’s prestigious New York Times Fellowship program. It is both a training program and, make no mistake, a chance to make a name for yourself at the most famous newspaper in the world.

Journalism and the Liberal Arts

Browning is one of the latest in a long line of successful journalists to emerge from Pomona, a liberal arts college that does not offer a journalism major. The best known is Bill Keller ’70, the Pulitzer Prize winner who served as editor of The New York Times from 2003-11. But the list is long and includes Trevor Hunnicutt ’10, who covers the presidential campaign of Democratic nominee Joe Biden for Reuters, award-winning investigative reporter Anjali Kamat ’00, and longform journalist Rachel Monroe ’06, among many others.

“There's this debate in journalism about whether you should major in journalism, go to journalism school, or not. I think I'm definitely on the side of ‘don't do that,’” says Browning, a former editor-in-chief of The Student Life, the student paper of The Claremont Colleges. “Work for your college paper, wherever it might be, and major in something else that's of interest to you.

“I think getting a broad education is really good for journalists because we're often asked to write about a broad variety of things, and parachute into an issue and try to learn all we can about it,” Browning says. “I think it helps to have this liberal arts education where you're taking politics classes but you're also taking econ and you have a STEM class or you have other requirements, history or whatever. I think that sort of education is really useful.”

Two philosophy courses he took with Associate Professor Julie Tannenbaum helped hone his critical thinking skills, says Browning, a politics major. So did a senior seminar guided by Associate Professor of Politics Amanda Hollis-Brusky, an expert on Supreme Court politics who is frequently sought out by journalists. In addition, he focused his senior project on politics and journalism.

Browning also took advantage of opportunities across the 5Cs to expand his career preparation. He counts Terril Jones ’80, a former foreign correspondent who now teaches several courses at Claremont McKenna, among his mentors. In addition, Browning spent a semester as an intern covering Congress for the McClatchy newspaper chain while participating in CMC’s Washington Program, which is open by application to students from any 5C.

“That was a lot of fun, just being in D.C. during the midterm elections, helping cover Congress and then the Brett Kavanaugh confirmation hearing,” Browning says. “I was in the hallway with a lot of other reporters outside that room. We were in sort of a press pen and every time the senators would take a break and walk down the hallway, we would be shouting out questions and asking what they thought so far. It was a real hands-on experience for sure.”

Hands-on experiences and “clips” — or links to published work, in more modern parlance — are more important than a degree when seeking a job in journalism. Recruiters for media outlets don’t flock to the Career Development Office the way they do from, say, consulting firms. Understanding that, Browning and his fellow student journalists searched for internships, often together.

Poring over spreadsheets together while gathered at the Milk & Honey boba tea shop on campus, Browning and friends applied for dozens of opportunities.

“I think it's a lot about getting your foot in the door, and after that first internship I had, it looks good on your resume and I had the experience and the clips and the skills to back it up,” he says.

Even before reaching college, Browning was chosen as the 2016 National High School Journalist of the Year by the Journalism Education Association, based in part on his work for his high school paper and his hometown Davis Enterprise in Northern California. After arriving at Pomona, he interned at the Claremont Courier and spent his first two summers in Sacramento with Kaiser Health News and then The Sacramento Bee before landing an internship with The Boston Globe. He continues to cheer TSL reporters with shoutouts on Twitter as they climb the same sorts of internship ladders.

As his senior year began last fall, Browning applied for six or eight different fellowships and internships as he plotted his post-graduation plans.

“I applied for the Times Fellowship not really thinking that I had a strong chance of getting it, but I felt like it was worth applying for just in case,” he says. “I think it just came down to having good experience and being eager to work and being excited about telling cool stories, and impactful ones.”

An Eye for a Story

His first byline in the Times came in June, revealing that some users of Twitch, the platform known for broadcasting video game action, were adapting it for the unorthodox purpose of livestreaming Black Lives Matter protests. Browning also wrote about fire evacuees facing coronavirus risks at shelters, and the online gaming site called Roblox that is captivating tweens.

His first big front-page story was a collaborative effort with other reporters on the background of Graham Ivan Clark, the teenage hacker who allegedly masterminded the hijacking of Twitter accounts belonging to Barack Obama, Kanye West and Jeff Bezos, among others, as part of a cryptocurrency scam.

The arrest happened on a Friday. On Saturday, Browning got a call from his editor asking him to scramble on a background story of the suspect.

“We were able to get contact information for some neighbors that live near his mom, so I was calling some of them to see if they knew him. Just the question of, what was he like growing up? Is this something that you saw coming? Did he have a history of online misbehavior or those sorts of things?”

Though “I'm not a huge gamer myself,” Browning followed the online breadcrumbs with the help of the Times’ expert research team.

“I tracked down someone who posted in this forum four or so years ago about being scammed by Graham Clark. I was able to find an account on this Minecraft forum to message him. And then I told him, hey, e-mail me if you see this e-mail. He said, “I can't really believe this is real that a Times reporter is reaching out to me about being scammed out of a hundred dollars four years ago but if this is really you, feel free to give me a call.” Browning did, and that interview was one of the strokes that painted the portrait of the accused con artist.

“Part of journalism is sort of putting pieces together,” Browning says. “And it turned out to be a pretty interesting story.”