The Benton Museum of Art at Pomona College will be the site of an ambitious large-scale installation and performance by the painter and sculptor Iva Gueorguieva in collaboration with the actor/dancer/director/choreographer Emma Portner. The two artists have created a vast, synesthetic work that explores the interconnectivity of painting, sound, dance, and film. Tumbling Rose, which itself is part of a larger project called Intersection, constructs a non-hierarchical entwining of these traditionally separate media, queering the conventional division between the ephemeral world of performance, dance, and music, and the spatial objecthood of painting and sculpture. “The intention,” says Gueorguieva, “is to produce an origami, not a dividing line, and sensation operates in that folded and intertwined configuration."

There are multiple components to Tumbling Rose: an immersive installation of painted canvases and tapestries in the Benton’s Loeb Family Art Pavilion; three films; and a culminating live performance by Portner. The paintings by Gueorguieva are complex compositions that are both illusionistic and intensely sculptural, with cuts and passages of transparent gauze that reveal other layers or viewpoints. Many of the works are double-sided and hang at various angles; they dissect the space and function as costume, prop, mask, and camouflage at once. Within this installation, Gueorguieva and Portner will present three films: Corner, Sting Ray and Tumbling Rose. The installation will be on view at the Benton from April 28 through May 8, as will eleven accompanying drawings by Gueorguieva in the museum’s “art hall.” At 6:30 pm on May 3, the installation will be fully activated by a live dance performance by Portner within a sonic environment created by Matt McGarvey that also features a brief live performance on violin by Bitch.

Tumbling Rose has roots and inspirations across cultures and artistic genres. One is the Yupik word Ella, for example, which is the same for “self,” “weather,” “other,” and “wind”; it suggests a sort of motion that intertwines interior space and the exterior world. Another is the essay “Wind Daruma” by the founder of the Japanese dance genre of Butoh, Hijikata Tatsumi. In the essay he describes a figure of wind sweeping up and through discrete bodies, transforming, erasing, “immolating” them. Like the “Wind Daruma” Portner, in the films and performance, continuously transforms into multiple characters reminiscent of feverish dreams or the daily news: the executioner and victim, the lover and the beloved, the maker and destroyer. Perhaps most trenchantly, Tumbling Rose finds a first-degree relative in the early 20th century art movement of Dada, born of the chaos and destruction of World War I. Dada artists forged an aesthetic strategy out of disruption, disillusionment, and the embrace of uncertainty. 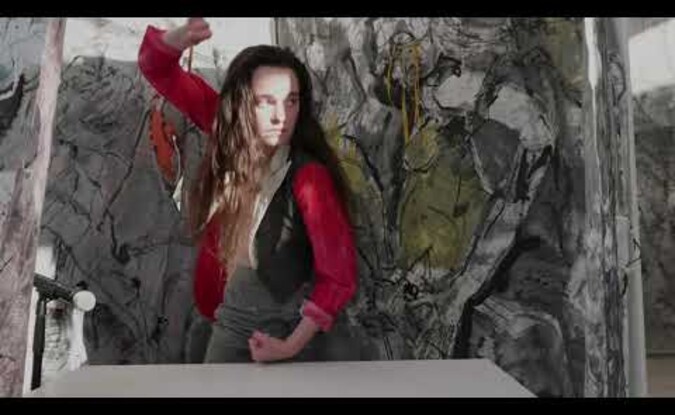 Matt McGarvey of Unthem Collective created the score for the films and the live performance and worked closely with Gueorguieva and Portner on conceptualizing and editing the footage. The installation sound is derived from the score that accompanies the live performance. Both include material from Bitch and Phil Skaller.

All Events
May
Tumbling Rose Performance
On May 3, Canadian actor/dancer/director/choreographer Emma Portner will perform in the Benton's courtyard and pavilion in an activation of her collaborative installation with artist Iva Gueorguieva called Tumbling Rose. The performance is free and open to…
Tuesday, May 3, 2022 | 6:30 pm–8:30 pm