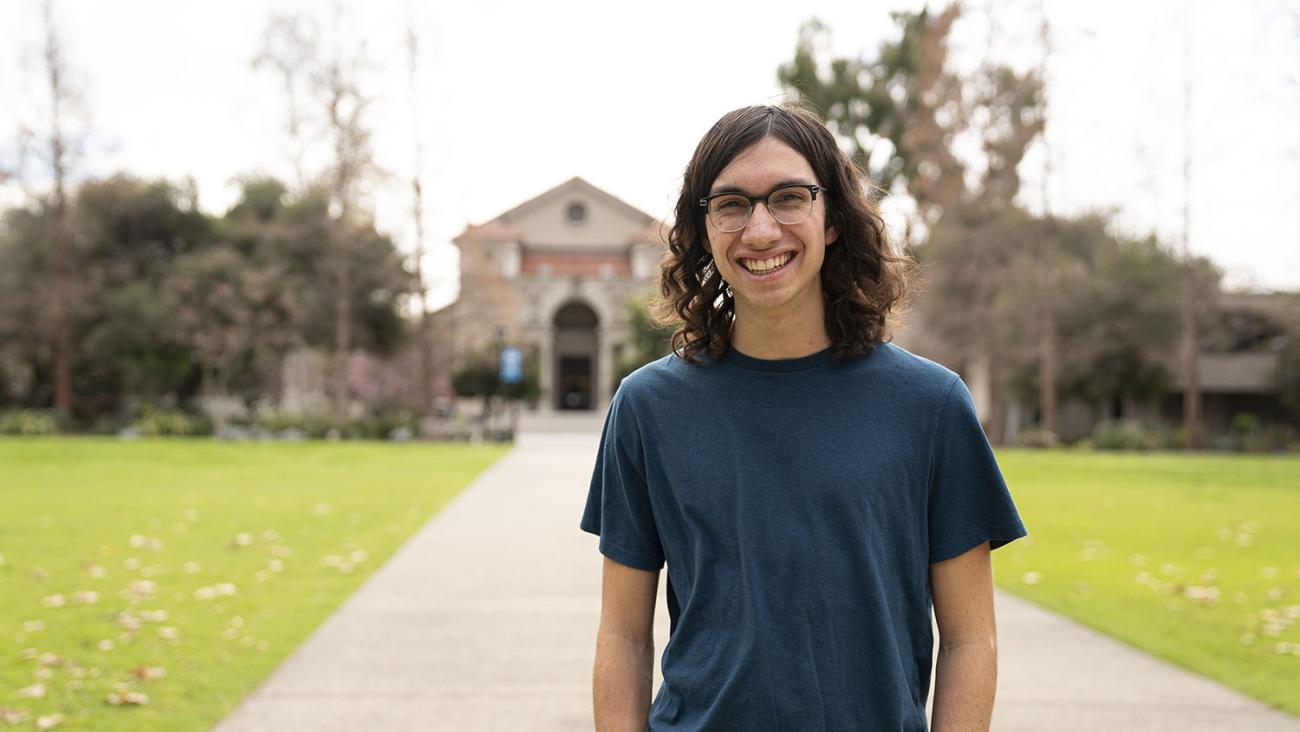 Story Date:
Nate Dailey '23 on the Pomona campus before the coronavirus (COVID-19) pandemic.

Even more suddenly than the global coronavirus (COVID-19) pandemic upended academic life this year, families fled the small town of Paradise, California, on a November morning in 2018 as the deadliest and most destructive wildfire in state history bore down.

Nate Dailey ’23 grabbed a change of clothes and, perhaps oddly to some, a yo-yo. It was the last time he would see his house standing. The next time he saw his 1993 Ford Taurus, it was a burned-out husk.

Seven months later, he and his classmates returned to the Paradise High School (PHS) stadium for a commencement like no other.

“What I wanted most was PHS back,” Dailey, one of seven valedictorians, told the crowd. “And despite a crazy, unpredictable year, in the end, that’s exactly what we got. Because PHS isn’t a place. It’s a collection of people.”

Like the Paradise High seniors of 2019, members of the Pomona College Class of 2020 eventually will be able to return to campus to commemorate what they and graduates around the world have been through.

Because Pomona, like Paradise High, “is more than a set of buildings,” as Dailey told the crowd at his graduation ceremony.

Most of the 25,000 or so residents of Paradise fled to the nearby Northern California city of Chico, some 15 miles away. Soon, Chico was bursting at the seams with evacuees from what became known as the Camp Fire, which ultimately killed at least 86 people and destroyed more than 18,000 structures, rendering Paradise uninhabitable.

Dailey’s family of five, including his parents and two brothers, couch-surfed with friends and family in the area for the first month. After that, a friend who happened to own a converted school bus let them live in it until the family found a tiny studio apartment. While his parents slept in the apartment, the three brothers lived on the bus, making a home above a set of wheels that rarely moved.

“It was a pretty sweet living space, honestly,” Dailey remembers. “We just made the most of it. If not for that, we would have been couch-surfing for another month or so. A lot of my college apps, I was doing them living in the school bus and borrowing a laptop from my cousin. But yeah, it worked out really well.”

For a time, there was no school at all.

“No one knew what was going to happen with that for a while, which was a big worry for me because I loved my school,” Dailey says.

Eventually, students did online work from a base at Chico Mall that came to be known as “Mall School.” Then they moved into a location the students dubbed “the Fortress,” next to an airport, where Dailey could see an airplane from his English class. Grades, he said, became less of a focus.

“I guess on the scale of everything else, it wasn’t a huge worry,” he says. “I knew that it was such a crazy circumstance that it would work out.”

Dailey’s parents remained employed, and though no one he knew died in the fire, most people were no more than once removed from someone who did, it seemed.

“I was definitely really lucky that my family and I were totally fine,” he says. “We weren’t in too terrible a position compared to people who didn’t have any kind of insurance and couldn’t find anywhere to live.”

By mid-March of his first year at Pomona, Dailey’s life would change abruptly for the second year in a row.

Returning to Chico, he moved back into a two-bedroom apartment with his family. They’ll soon be moving into a house for the first time since the fire.

“I think it was a little bit of an echo for sure, just being such an uncontrollable twist to my life,” says Dailey, who is sharing a bedroom with his two brothers and sleeping in a bunk bed. “At the same time, it was also definitely like an 'I've got this' kind of moment because at this point, my family is really on their feet.

His plans for the summer are disrupted. Dailey and his aforementioned yo-yo were supposed to be headed for Phoenix in June for the National Yo-Yo Contest, and later this summer to Budapest, Hungary, for the World Yo-Yo Contest. An accomplished international competitor, Dailey finished fourth in the 2019 World Yo-Yo Contest. He has a sponsorship that pays for competition travel and also has his own signature Nate Dailey yo-yo. The nationals may be rescheduled for fall, but with international travel problematic, the worlds are canceled.

“I've been yo-yoing a bunch with having a lot of free time and being inside a lot,” says Dailey, who picked up the pastime when he was about 12. “I've been making some new tricks and stuff, and it's definitely very meditative and just feels very good to do. I'm lucky that I'm able to do that.”

As classes this semester drew to a close, he says he couldn’t help but look back to last year.

“I've been thinking about seniors now with this situation happening. And I'm sure it's hard not having that triumphant moment, because that's usually what graduation is like. No matter what your situation is, it's a very triumphant thing.”

It was all the more so for the Paradise High Class of 2019.

“We had overcome so much and being physically back at our high school just was a huge deal to all of us,” Dailey says. “And it was kind of like a celebration for the whole town too. Even more than just the seniors overcoming so much, it was all of the residents of the town overcoming a lot. And it was a moment of like, here we are, seven or eight months later, and most of us have found somewhat of a new normal. And it just kind of symbolized for all of the Paradise residents, I think, wow, we made it through that.”