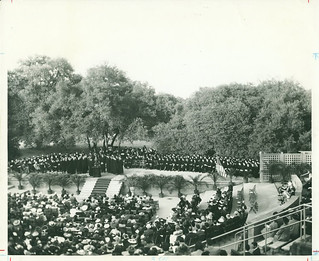 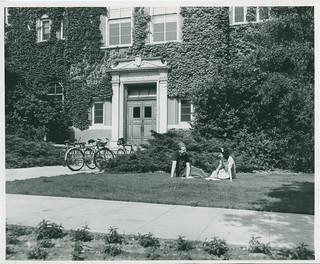 Pomona and the Japanese American Internment

In April 1942, just days before all Japanese Americans in the Claremont area were due to be interned, President E. Wilson Lyon arranged with President Ernest Wilkins of Oberlin College in Ohio for Pomona junior Itsue “Sue” Hisanaga '43 to transfer there. The next day, President Lyon, Dean of Men William Nicholl and a crowd of Pomona students accompanied her and her brother, Kazuo “Casey” Hisanage '42—who would be allowed to graduate in May despite his April departure—to the train station, where the College band played for them. “Everybody cried,” one student later told Dean of Women Jessie Gibson. After completing her work at Oberlin, Sue was awarded her degree from Pomona in absentia during Oberlin’s commencement. In a letter to Wilkins that was read at the ceremony, Lyon wrote: “It is on the part of Pomona and Oberlin an assurance to our loyal Japanese citizens that we believe in democracy and tolerance. May this ceremony … serve as a pledge of faith and goodwill on the part of American higher education.” Another Pomona student, Kobe Shoji '47, elected to go into internment with his family, returning in 1946 to complete his degree.

With the outbreak of World War II, the College adopted an accelerated program and remained in session year-round in order to make it possible for male students to complete their college courses before being called for military service.

A group of Pomona pranksters set out in 1942 to burn a capital “P” into the middle of the University of Redlands’ football field on the eve of a game, using black market gasoline. Unfortunately, they made the mistake of leaving behind a written copy of their plans, including their names.

The Operating Agreement of 1942, the result of mounting difficulties among the colleges dating from the 1930s, was created to "govern the relationships between Claremont College, Pomona College and Scripps College and such other institutions that may be brought within this group…." The agreement created an intercollegiate council to supervise the administration of all joint budgets including the business office, health service, auditorium events and library purchasing.

Anne Frank’s family went into hiding in an attic above her father’s office in an Amsterdam warehouse.

The movie Casablanca premiered at the Hollywood Theater in New York City.

At the University of Chicago, a team led by Enrico Fermi initiated the first self-sustaining nuclear chain reaction, and a coded message (“The Italian navigator has landed in the new world”) was sent to President Roosevelt.