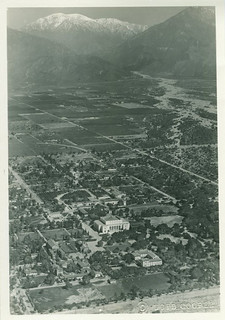 A portable 12-inch Cassegrain reflector telescope was installed in the Brackett Observatory. The telescope was originally constructed for use in surveying possible sites for the giant 200-inch telescope on Mount Palomar.

With male students returning to college, enrollments hit a new peak, topping 1,000 for the first time with the enrollment of 1,125 students—640 men and 485 women— for the 1947-48 school year. Students registering for the first time totaled 218 men and 139 women, including 106 veterans, three of them women. With the addition of a number of new professors, Pomona’s faculty also became the largest in history, but in spite of this, the rapid growth also resulted in substantially larger classes. Some classes spilled into hallways; others had to be split into sections; and others planned as seminars had to be taught as lecture classes.

Like many other institutions, the tightly knit social unit that had been the student community in the past underwent a great deal of quiet disruption in the years just after the war. Veterans were more resistant to a cohesive sense of class identity and to traditions they viewed as unnecessary. This resulted in a rapid decline—or in some cases, simply a lull—in certain traditions, especially those involving hazing rituals and competitions between classes.

The Pomona College Glee Clubs, under the direction of Ralph Lyman, recorded four records at a studio in Hollywood. The men recorded two records, the women one, and the two groups combined for a fourth.

When John Wilson ’50 landed the part of Harry, a dancer-comedian in The Time of Your Life, he wrote to Gene Kelly, who created the part on Broadway, to ask for advice on playing the character. Kelly replied, warning Wilson to avoid turning Harry into an Isadora Duncan interpretative dancer. “[Harry] runs a wide gamut,” Kelley wrote, “from Missouri Waltz to the semi-original music on the harmonica. I’d suggest to you that you not be afraid to attack all this with a very uninhibited approach.” The famed dancer also wished Wilson the best of luck from one William Saroyan interpreter to another.

Harwood and Frary dining halls began serving dessert-less dinners once a month. The $30 saved each month was used for gifts to European and China Relief, Casa Colina and the Claremont Public School Fund.

Robert Shaw ’38, voted the greatest choral conductor in the country by the National Association of Composers and Conductors, returned to campus to lead the combined Pomona College glee clubs and choirs in a sold-out concert in Bridges Auditorium, which raised $2,700 for the Memorial Gymnasium Fund.

California Congressman Richard M. Nixon spoke at a Pomona Assembly on Nov. 11, urging postwar support and U.S. aid for Europe to stop the growing threat of Communism. Nixon, who traveled with a Congressional fact-finding group through Europe, noted that France had the best chance for recovery of any of the war-torn countries in Europe.

The regular Sunday broadcast of the Charlie McCarthy Show originated from Bridges Auditorium on Dec 5.

A formal convocation of faculty and students from the four Claremont Colleges—Pomona, Scripps, Claremont Men’s College and the Claremont Graduate School—was held for the first time on May 15 in Bridges Auditorium.

The Truman Doctrine was proclaimed, aimed at stemming the spread of Communism.

The ship Exodus 1947 left France for Palestine with 4,515 Jewish Holocaust survivor refugees on board.