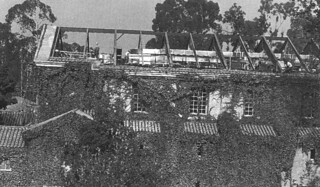 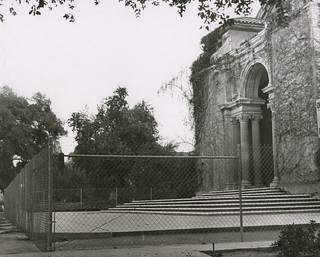 A fenced-off Bridges Hall of Music awaits the results of the "Save Little Bridges" campaign in 1971.
8 years ago by Pomona College
Submit a Photo 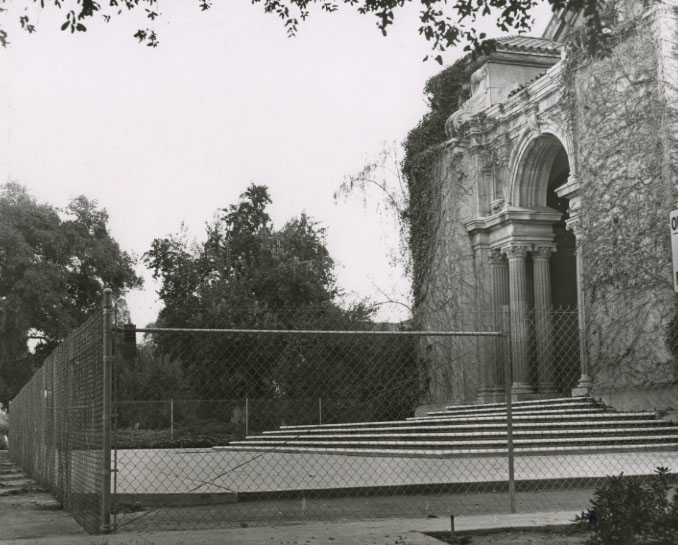 Renovation of Bridges Hall of Music

In 1971, a much-needed renovation of Little Bridges was begun. The building had been closed since Christmas Eve, 1969, because of an engineering study that decreed that “its continued use in its present condition creates a possible hazard to occupants in case of an earthquake.” After two years in which the building was unused and unoccupied, there was serious doubt about the future of the building, with The Student Life predicting at one point in 1971 that it would be torn down. The cost of the renovation was expected to be $796,000, and though the Board gave the go-ahead in May, they also decided that work would not begin until all of the funds to pay for it had been raised. By July, that goal of the “Save Little Bridges” effort had been surpassed, with a total of more than $900,000 raised from alumni and friends. Among other changes, the original roof tiles were removed and replaced as part of construction work to improve the landmark’s earthquake resistance.

The Board of Trustees, responding to a need for more unrestricted funds, founded a new support group called The Torchbearers. Named for one of Pomona’s most revered songs, the group required members to make an annual donation of $1,000.

After a six-month touring hiatus, Frank Zappa and the Mothers of Invention made their concert debut on May 18 at Bridges Auditorium. Tickets for the concert, which was co-sponsored by the ASPC and the radio station KPPC-FM in Pasadena, were $2.50, $3.50 and $4.50.

In July 1971, an international conflict over an imprisoned Pomona student came to an end when Mark Huessy ’73 was released from an East German prison. Huessy, a Pomona student studying abroad, was arrested less than a week before his scheduled return from Germany to Pomona in January 1970 and tried on charges of espionage, helping East German citizens escape and provocative criticism of the government. He was sentenced to seven years in prison, but after the U.S. began denying East Germans visas to visit America, including the East German foreign minister, the sentence was reduced to five years. As a result of ongoing pressure from the U.S. government, Huessy was unexpectedly released after 18 months in an East German prison.