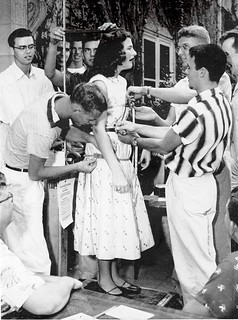 Photo of the freshman "weigh-in" from the 1954 Metate. This practice was banned in 1972.
8 years ago by Pomona College
Submit a Photo 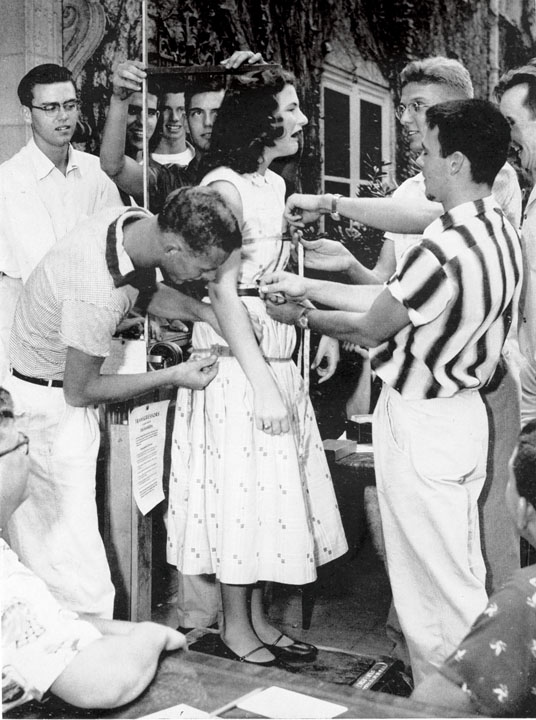 A faculty Commission on the Education of Women was appointed and chaired by Dean of Students Jean Walton. The commission’s deliberations led to the introduction into the curriculum of a multidisciplinary course in Women’s Studies, titled “Changing Sex Roles in Contemporary Society,” and the establishment of an Office of Women’s Studies at the College.

On March 13, a performance art piece at Montgomery Art Center staged by Southern California artist Wolfgang Stoerchle involved a nude Stoerchle urinating on a small rug in front of an audience. The controversial work would later be cited as a contributing factor in the mass exodus of the art faculty a year later.

The five-foot wall that curves along the northern edge of Walker Beach was built in 1956 as a flood break, but by at least the early 1970s, its inner surface was being used by students for various painted messages. The earliest reported was in 1972, when Betsy Daub ’74 and Jo Ruprecht ’73 painted the words “Veni, Vidi, Vino” in order to cover up a scatological and apolitical message that had appeared on the wall the previous night. The wall was officially recognized by the College as a free-speech wall in 1975, when students painted “Free Angela” on it, referring to the imprisonment of activist Angela Davis, and College officials decided not to paint over it, leaving it for students to do with as they wished, within certain limits. Since then, generations of Pomona students have turned Walker Wall into a public forum.

The inaugural concerts of Pomona’s Smith Memorial Organ in Thatcher Music Building's Lyman Hall were held on Oct. 18 and 19. The instrument had been ordered by Rudolf von Beckerath of Hamburg, Germany, and after a year of fabrication, had traveled 8,100 miles by sea and truck.

Pomona’s student-run FM radio station, KSPC, moved from its old home in Replica House to its new studios in the basement of the Thatcher Music Building. Awaiting it there was approximately $25,000 of new equipment, including short-wave receivers and remote control consoles. The station’s new home included two studios, one for pre-recording programs for delayed broadcasting and one for live broadcasts, plus a production control room, a teletype room, a computer record library and a staff lounge. In the fall of 1972, KSPC began broadcasting in stereo at 3,000 kilowatts, enough power to be received throughout the Southern California basin.

The fall of 1972 saw the end of a dubious tradition, as a campaign by a number of the College’s women forced the football team to give up its annual practice of weighing and measuring all first-year women, often against their will. The weigh-in, as it was called, was described by some of the participants as “all in fun,” but many of the women reported finding it frightening and demeaning. Negotiations between the sponsors and football team in 1972 ended in agreement that the tradition should not continue. When some members of the team tried to revive it a year later, they gave up after confrontations with other students and with Dean of Students Jean Walton.

Four re-inaugural concerts of the Pomona College Symphony Orchestra and the men’s and women’s Glee Clubs were held in February to celebrate the reopening of Bridges Hall of Music after a closure of more than two years.

The Death of Buster Quinine

In October, English Professor Dick Barnes organized an experimental event featuring his play, titled The Death of Buster Quinine. Billed as “a sacramental farce and fire opera,” the play took play in a rock quarry east of campus and featured giant puppets, original poetry and jazz, fireworks, light sculptures and a flaming jagannath equipped with whirling Mexican castillos, much of it built with the assistance of arts faculty and students, including such future luminaries as James Turrell ’65 and Peter Shelton ’73. Barnes would go on to restage the production three more times over the years.

Lynda Obst ’72 is a movie and television producer whose credits include Flashdance, Sleepless in Seattle, The Invention of Lying and Hot in Cleveland. She is the author of the memoir, Hello, He Lied: And Other Truths from the Hollywood Trenches, which was adapted into a documentary for AMC.

Marianne Williamson, who attended Pomona from 1970 to 1972, is the author of 10 books, including The Age of Miracles, A Return to Love and A Course in Weight Loss. Six of her books have appeared on The New York Times bestseller list, with four of them landing at No.1. A popular guest on talk shows, Williamson also founded Project Angel Food, a meals-on-wheels program that serves homebound people with AIDS in the Los Angeles area.

The Godfather was released in cinemas in the United States.

President Richard Nixon and White House Chief of Staff H. R. Haldeman were taped talking about using the C.I.A. to obstruct the F.B.I.’s investigation into the Watergate break-ins.

Eugene Cernan became the last person to walk on the moon, after he and Harrison Schmitt completed their third and final extra-vehicular activity of Apollo 17.