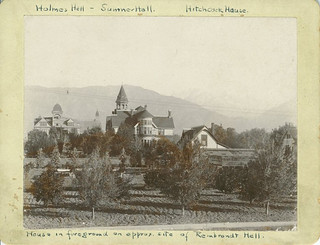 Pomona College campus (1895), looking north. Holmes Hall is on the left; Sumner Hall is center.
8 years ago by Pomona College 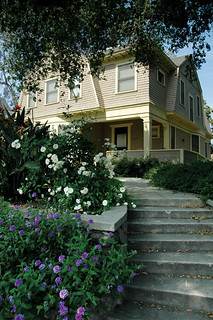 Cook House, built in 1895, as it looks today
14 years ago by Pomona College 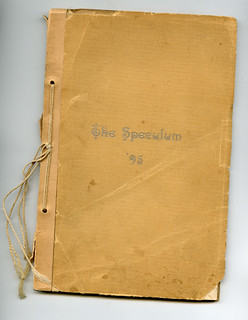 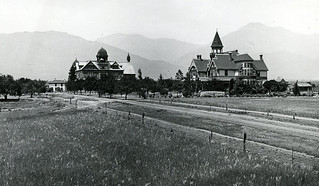 In 1895, the red sandstone cornerstone was moved from Piedmont Mesa to a site south of the present Carnegie Building by the Class of 1895 to mark their Class Day. As Wilson Lyon wrote in The History of Pomona College, 1887-1969: “In secret the class polished the stone, trimmed its edges, and prepared it for erection on a pedestal of seven stones, one for each member of the class. Upon the cornerstone they carved their class numerals and, in Greek, the class motto, which in translation reads ‘Not to live but to live well.’ Beneath the stone were placed duplicates of some of the papers laid under the stone originally in 1888.” The stone can be seen at that location today, a reminder of the College’s beginnings. According to Charles Sumner, the papers originally placed under the Piedmont cornerstone were later buried under the Carnegie Building.

Cook House was built by Albert Cook, next door to Baldwin House. Although the house has been altered over the years, the stone wall is original. It is currently used to house new faculty.

The Speculum Becomes the Metate

Upon discovering that Speculum was a yearbook title used by at least two other colleges, the juniors in 1895 sought a name “as distinctive as possible and one that would not be duplicated.” For the 1896 yearbook, they chose the name Metate, which they noted was an Indian word meaning mortar or grinding stone. “It has accordingly been our effort to grind up and get into mentally digestible condition the year’s doings,” they added. More than a century later, the Pomona yearbook is still known by this distinctive name.

The College set up a committee of three, including George Marston, to “make a thorough canvass of the affairs of the College, financial and otherwise, and report any needed changes.” Marston presented a plan to raise $20,000 for current expenses by July 1, including $2,000 of his own. The College’s first budget was passed by the Board, limiting expenses to $21,000, of which over $4,000 consisted of debt service. President Baldwin submitted his resignation, which was declined.

Intercollegiate play began at Pomona in 1895, when the College’s football, baseball and track teams first competed against other prominent West Coast institutions. Football was first played in 1895, under Coach Byron van Leuven, then discontinued for a year because it was considered too dangerous. It was then reinstated in 1897. The early teams included players from both the preparatory and college departments and were often played at high schools. Pomona’s first game with Occidental College was played in 1895, with Pomona on the losing end by a score of 16–0. The team finished its first season 2-1-1.

The Pomona Alumni Association was formed at the Commencement of 1895, with 17 members enrolled. Arthur V. Stoughton ‘95, who would go on to become a distinguished physician, was elected as the group’s first president.

The 1895 catalog lists a number of expenses not included in the cost of tuition: