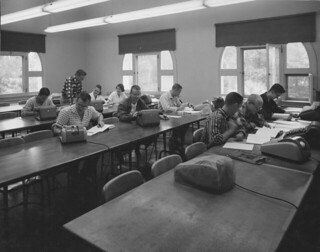 Math class in 1960
8 years ago by Pomona College 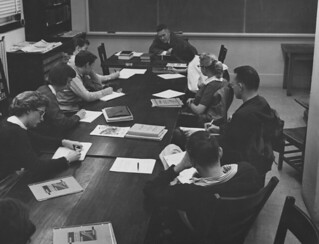 Seminar in 1960
8 years ago by Pomona College 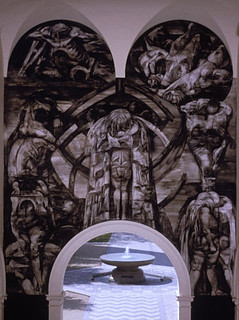 Rico Lebrun's "Genesis" mural above the entry to Frary Dining Hall.
8 years ago by Pomona College 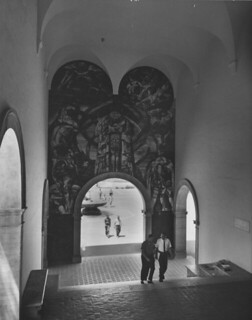 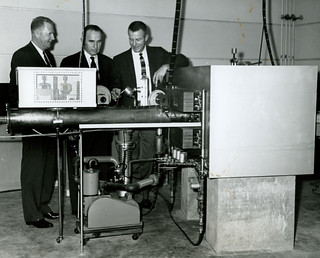 President E. Wilson Lyon, Trustee Frank Seaver 1905, and Physics Professor Edward Fryer examine the vitals of a Cyclotron being constructed for Pomona College in 1960 by Hughes Aircraft Company
8 years ago by Pomona College
Submit a Photo 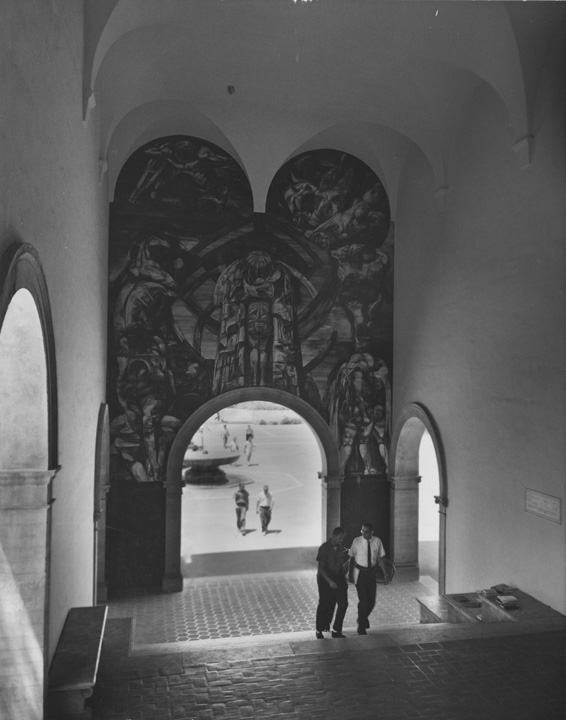 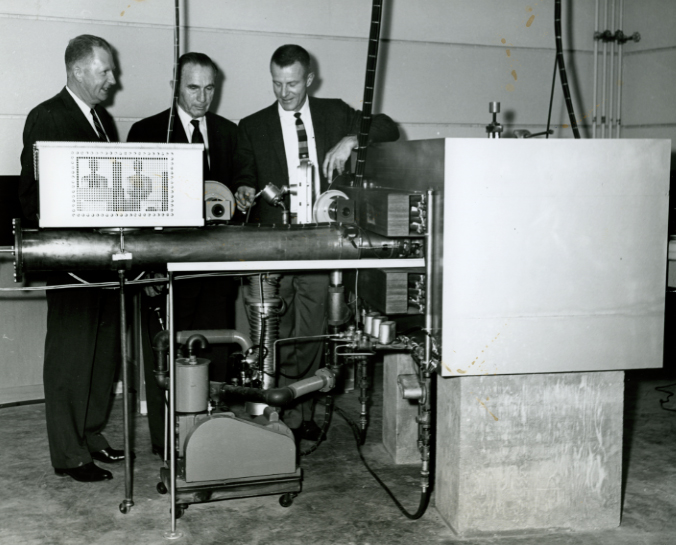 Rico Lebrun first visited Pomona College in November 1956. Captivated by Orozco’s fresco of Prometheus, he expressed interest in working on campus and, through the efforts of art history professor Peter Selz, was given a commission. Selz later persuaded Los Angeles art patrons Donald and Elizabeth Winston to sponsor the work as a gift to the College. In Genesis, painted in 1960 on the west wall of the building’s entrance portico, Lebrun was interested in portraying what he called “the evolution of form, of becoming.” The story of Creation—the original “becoming” of Christian doctrine—was an ideal vehicle for expressing the artist’s belief that reality is a complex interweaving of ideas, an inextricable blending of opposites, where good and evil coexist side by side. With its epic events and universal themes of tragedy and redemption, the story of Genesis provided the narrative framework for what was to be a highly personal aesthetic and political statement.

Vacuum pumps, control valves and a five-foot coaxial feed line for supplying acceleration energy made up the "plumbing" of a desk-sized cyclotron built for Pomona College by Hughes Aircraft Company and donated in 1960 by Trustee Frank Seaver 1905 for the Physics Department. The machine's iron-block electromagnet, mounted on concrete supports, contained semi-circular vacuum tanks in which positively charged particles could be accelerated.

The student body gave its support to Barbara Biggar ’62 and Candice Anderson ’61, two Pomona students on the Fisk Exchange who were arrested for participating in the Nashville lunch counter sit-ins. The Student Life sent Andrew Jaffe ’60, later a staff member of Newsweek, to report on the experiences of the two students, and students traveled to the South in the summers of the 1960s to participate in the rallies.

Darlene Hard ’61 spent the summer before her senior year earning two Grand Slam tennis championships at the French Open and the U.S. Open. Hard added a second U.S. Open in 1961 and was twice the runner-up at Wimbledon (to Althea Gibson in 1957 and Maria Bueno in 1959).

Parts of The Absent-Minded Professor starring Fred MacMurray were shot on campus in 1960, including a quick glimpse of the College Gates in one of the opening scenes. Pomona’s gym was the location for the scene of the high-flying basketball team wearing shoes propelled by flubber. The final score of the game was, of course, 47-46. (The whole film is available on YouTube.)

Late in the presidential campaign, Edward Kennedy delivered a campaign speech at the McAlister Center in support of his brother John. A straw poll among Pomona students showed 55% identifying as Republican and only 25% as Democrats.

Jazz singer Ella Fitzgerald, known as the “First Lady of Song” and the “Queen of Jazz,” performed at Bridges Auditorium.

Choreographer and dancer Twyla Tharp, who expanded the boundaries of American ballet and modern dance through her use of movement and popular music, was a student at Pomona for three semesters in 1959 to 1960 before transferring to Barnard College in New York to complete her degree. She has choreographed dances for major ballet companies, as well as for Broadway musicals and films such as Amadeus and Hair. Notable works include Deuce Coupe, created for the Joffrey Ballet with music by the Beach Boys, and Push Comes to Shove, danced by Mikhail Baryshnikov to music by Mozart and Scott Joplin. Tharp’s many awards include a Tony, two Emmys and The Kennedy Center Honors.