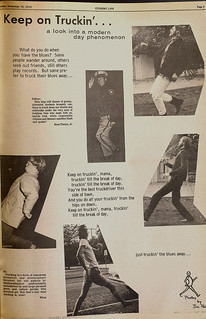 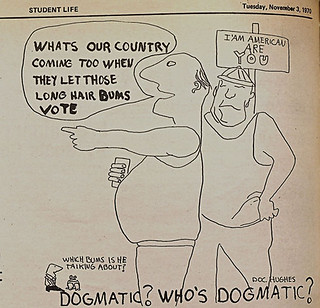 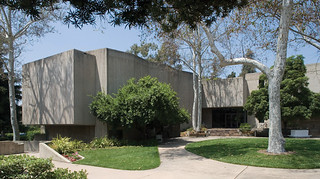 Thatcher Hall, built for Pomona's Music Department in 1970
14 years ago by Pomona College 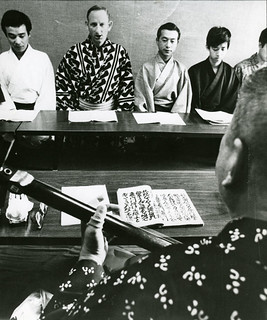 Professor Leonard Pronko at the Kabuki Training Program at the National Theatre of Japan in 1970. He was the first non-Japanese to study there
8 years ago by Pomona College 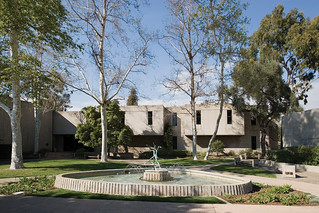 Lyon Garden with Thatcher Hall, built in 1970, in the background
14 years ago by Pomona College 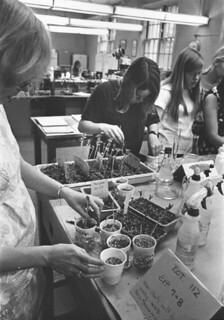 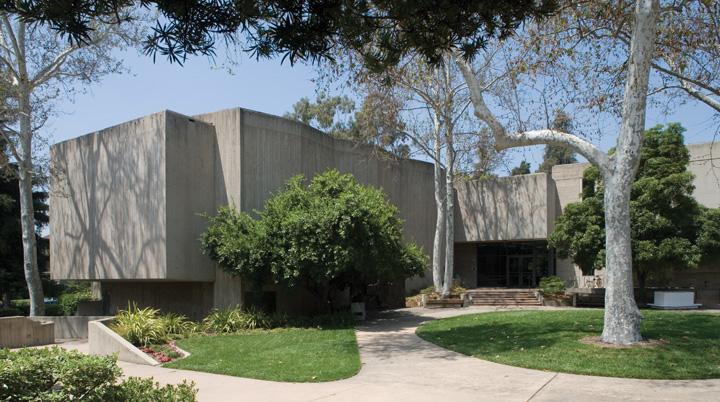 Dean of the College

Students, Faculty and the Board

A nine-member Board of Trustees committee was created to include three trustees, three students and three faculty members, marking the first time in the 83-year history of the College that either students or faculty had served on board committees.

In sharp contrast to its historic neighbors but like other Pomona buildings constructed in the late 1950s and 60s (science laboratories, Oldenborg Center), Thatcher Music Building, completed in 1970, reflected the prevailing functionalist aesthetic of the time as well as a national trend toward conceiving new campus buildings as individual objects that contrasted with, rather than conformed to, their architectural contexts.

Designed for the teaching and playing of music, Thatcher’s layout, engineering and construction were carefully calibrated for the control of sound, a goal that required novel solutions to age-old dilemmas. Among remarkable structural aspects of the building was the configuration of practice rooms and studios that allowed as many as 30 individuals and/or groups to play simultaneously in different spaces. Potential sound and vibration problems were avoided by building rooms within rooms, with ceilings and walls suspended on springs from the outer concrete shell, and floors floated on cork cushions; each room was, thus, a self-contained entity with no direct structural contact with any other. Furthermore, to prevent the formation of troublesome “standing waves,” none of the building’s ceilings, floors, and wall surfaces was designed to be strictly parallel; the result was visually unusual, but aurally, Thatcher’s rooms had the properties of much larger halls, aiding musicians in better judging the quality of their playing. Thatcher also had the distinction of being the first “Edison All-Electric” building on the Pomona campus and in Claremont.

The 35,000-square-foot building features two back-to-back rehearsal halls and, in a perpendicular wing, department offices, classrooms, faculty studios and large spaces that double as practice rooms for small ensemble playing and studios for visiting musicians. Beginning in 1972, it also housed the broadcasting studios for KSPC-FM in its basement. Funding for the music building came from several sources including a federal grant ($462,043 under the Higher Education Facilities Act of 1966), and gifts from Madge Rice Thatcher and her late husband Harry S. Thatcher.

Pendleton Center was funded in part by a federal grant under the Higher Education Facilities Act that required the College to raise two-thirds of the estimated cost of the building (approximately $500,000). This was accomplished with a large gift from Mr. and Mrs. Morris B. Pendleton '22 and a number of smaller donations by alumni. The second Renwick Gymnasium, originally built as barracks during World War I, had served for years as the women’s physical education facility. The student body had more than doubled during these years, and this fact, added to the decrepit state of Renwick, only intensified the need for new facilities. The Pendleton Center contained 12,000 square feet of space, including offices, a 3,800-square-foot dance studio, teaching spaces, dressing rooms and a multi-purpose room. Of particular note was the dance studio. Marking the southern edge of campus, its Japanese-inspired, wing-like roof echoed the grace and rhythms of the human movement it contained. The building is used today as the home of the Dance Department.

With the U.S. invasion of Cambodia on May 1, anti-war unrest on America's campuses reached a boiling point, setting off riots across the country. In the wake of the shootings that took place on the Kent State campus on May 4, in which Ohio National Guardsmen killed four students and wounded nine others, there were virulent anti-ROTC protests at CMC (see below) and voices were raised on the Pomona campus calling for a departure from the normal end of semester during this time of turmoil. Classes were closed on May 7, and with less than three weeks left in the academic year, the faculty agreed to a radical restructuring of remaining academic work, adopting a proposal called "The Renaissance" that gave students a range of choices, including switching to a pass-fail basis for their classes or just ending their work then and there and accepting the resulting grade for work done to date. Some departments also restructured or waived comprehensive exams. On campus and throughout the area, students in the anti-war movement joined in teach-ins, protests, petition drives and other activities.

In his report to the Board, President David Alexander, completing his first year at Pomona, is both eloquent and a bit defensive, saying, "To me, then, 'Renaissance' was neither a 'cop-out' by the students nor an unmitigated academic blessing. The universality of the student mood and the strength of feelings harbored by the students have given most Americans pause. We have perhaps learned at last the painful lesson that all of us are bound up in a mood of anxiety which can be triggered into aberration or at least changes in our habits. We may also have learned a general lesson which college administrators have been endeavoring to teach for a long time: that students do stand in a special relationship to an institution like Pomona. Perhaps the main reason we have not 'cracked down on' students is that we regard them in our better moments as related to us in a familial way. They are neither our clients nor our customers. They are our younger associates in a quest for truth."

Professor Leonard Pronko became the first non-Japanese person to study at the Kabuki Training Program at the National Theatre of Japan. Upon his return to Pomona, he would introduce courses in Kabuki into the curriculum and acquaint generations of Pomona students with this classical form of Japanese theatre through actual productions.

Helene Winer and the Gallery

Following in the footsteps of Hal Glicksman during a particularly high-energy and creative period for the arts at Pomona, Helene Winer became director of the gallery and curator in the fall of 1970. During her two-year tenure, she organized a range of significant exhibitions, including artists Bas Jan Ader, Ger van Elk, Jack Goldstein, Joe Goode, William Leavitt, John McCracken, Ed Moses, Allen Ruppersbert and William Wegman, as well as controversial performance work by such artists as Chris Burden ’69 and Wolfgang Stoerchle.

The Student Affairs Committee approved a proposal from the residence hall council to extend the coed living arrangements on campus. The proposals provided for Wig and Harwood to become coed dorms with men on the first floor, and for women to live in two wings in Walker Hall and in some of the four-person suites in Clark I. Norton was to become a women’s dorm, with Smiley, Clark III and Clark V remaining all-male dorms.

In the same year that it became co-educational, Pitzer College joined forces with Pomona in athletics to form the new Pomona-Pitzer Sagehens. This was the second time that Pomona had joined another of its sister institutions in a joint athletic effort. The first joint program, with Claremont Men’s College, had lasted from 1946 to 1956.

Gary Troyer took over as swimming and water polo coach, beginning a coaching tenure that would last for 35 years until his retirement in 2004.

Bill Cosby performed at a benefit at Bridges Auditorium to raise money for Myrlie Evers’  24th district congressional campaign. Tickets for “An Evening with Bill Cosby,” were $3, $4, $5 and $6.

A headline in the Oct. 13  issue of The Student Life announced: “Financial Crisis Looms; Campus Unrest Blamed.” The article went on to explain: “Endowments were down $2.5 million over the previous year, a decrease of 84 percent. Since economic instability has continued for several years and has never before prompted such severe shrinkage of endowments, it must be concluded that there is another cause which deserves most off the blame. According to Mr. Richard Nimmons, vice president of Pomona College, campus disorder is probably the guilty factor.”

Pomona College received a 480-acre ranch from Mildred Pitt '25. Located in Monterey County, the ranch was given to the College with the stipulation that it be used as a study area for ecology and geology while Pitt was still alive.

Seeley W. Mudd Library was constructed, joined to Honnold Library by a pedestrian bridge. The new library building had capacity for 375 readers and shelf space for 50,000 volumes. In 1987, a major new addition to the two buildings resulted in the physical joining of the two spaces into the 353-foot-long complex now known as Honnold-Mudd Library.

Just seven years after its founding as a women’s college, Pitzer College became co-educational, with a student population of 618 women and 80 men.

In a day of violence, disruption, rhetoric and confusion, students attempted to take over the ROTC office and registrar offices at CMC, and eventually succeeded in taking over the president’s office on the second floor of Bauer Hall. The events started out the evening before when 100 or so students congregated in Upper Walker Sunday night to protest the secret U.S. invasion of Cambodia and the killings at Kent State University.

Bill Keller ’70 was executive editor of The New York Times from 2003 until 2011, when he stepped down to become an op-ed columnist for the paper and writer for The New York Times Magazine. He won a Pulitzer Prize in 1989 for his reporting on the breakup of the former Soviet Union. Before becoming executive editor of the Times, he served as managing editor from 1997 to September 2001 after having been the newspaper’s foreign editor from June 1995 to 1997.

Four students at Kent State University in Ohio were killed and nine were wounded by Ohio National Guardsmen during a protest against the U.S. military incursion into Cambodia.

Lieutenant William Calley went on trial for the My Lai Massacre.