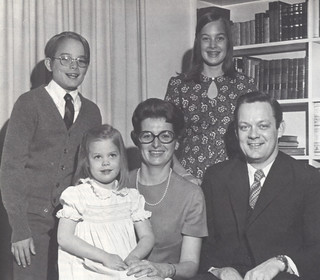 President David Alexander and his wife, Catherine Coleman Alexander, came to Claremont in the summer of 1969, with their children Kitty, 11; John, 9; and Julia, 2.
7 years ago by Pomona College 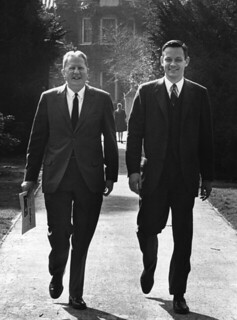 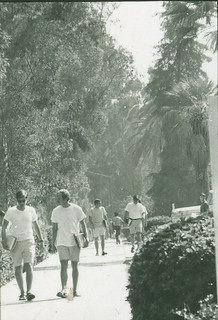 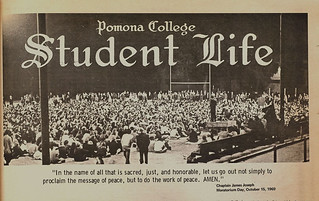 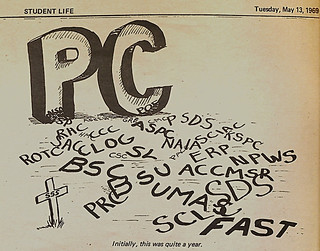 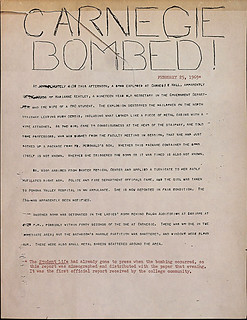 Special, hand headlined notice from The Student Life after the bombing in Carnegie in 1969
7 years ago by Pomona College 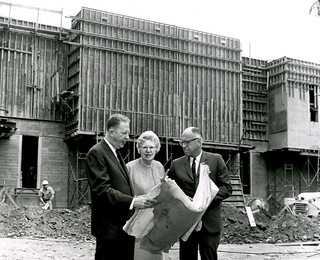 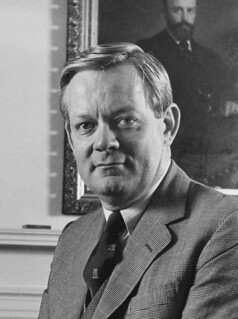 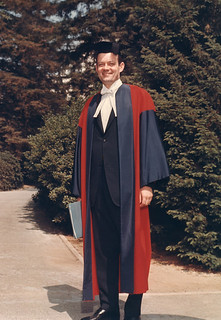 Pomona's seventh president, David Alexander, in his robes for his 1969 inauguration
7 years ago by Pomona College 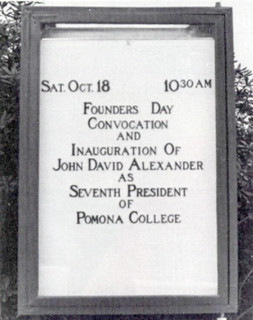 The marquee from the inauguration of Pomona College's seventh president, David Alexander, on October 18, 1969
7 years ago by Pomona College
Submit a Photo

President Lyon, who would reach the age of 65 in summer 1969, had indicated as early as 1966 that he would not seek to extend his tenure beyond this date. A committee, formed to begin the search for his successor, announced on Jan. 13, 1969, that Dr. John David Alexander, the 36-year-old president of Southwestern at Memphis (now Rhodes College), had been selected as the College’s seventh president.

David Alexander became president of the College at a tumultuous time in the history of the country and its institutions of higher learning. His inaugural address, titled “A Perspective on Renewal,” dealt forthrightly with the threats to American society posed by the Vietnam conflict, which, unlike World War II which had engendered a unified national response, was dangerously divisive. “Our task now is to winnow from the welter of changing values those transcendent values for which this college exists, so that while trying to move with society Pomona College will help move society through education.” Always an eloquent speaker, Alexander addressed as well the College’s capacity for self-renewal, amply demonstrated in the past and likely to be even more necessary in the years to come.

President Alexander went on to become the second Pomona president to serve more than 20 years, ending his tenure in 1991. The length of Alexander’s presidency was impressive at a time when the average term of office for American college presidents had fallen to six years, and the College prospered under his leadership. In 1969–70, the endowment stood at $24 million; by 1990 it had reached $296 million, the Centennial Campaign alone having raised $134 million. During the same period, the value of the College’s assets rose from $71 million to $450 million. Pomona thrived equally in terms of the quality of its faculty and students. With SAT scores and GPAs steadily rising, and a student body increasingly broad in diversity and national representation, Pomona joined the top-tier of the country’s liberal arts colleges, a position it continues to occupy.

Jean Walton, who had been Dean of Women since 1949, was appointed Dean of Students and would continue to serve in that capacity until her retirement in 1979.

On Feb. 26, a bomb went off in the Politics Department in Carnegie Hall, seriously injuring the department secretary, Mary Ann Keatley. Mrs. Keatley lost part of her right hand and suffered severe eye injuries when she picked up a shoebox wrapped in brown paper from a government professor’s mailbox and it exploded in her hand. Another bomb went off at approximately the same time in a women’s bathroom at Scripps College, with no casualties. No one ever took responsibility or was arrested for the bombings, which took place during a time of publicized protests and heightened tensions concerning the creation of ethnic study programs at the College and the Vietnam War.

After Pomona’s historic Bridges Hall of Music was closed for all events because of serious structural defects unexpectedly discovered in a November engineering survey, The Student Life reported that “financial and practical considerations make it seem unlikely that the 55-year-old concert hall will ever be renovated and used again.” This editorial forecast, however, turned out to be far too pessimistic. The building was, indeed, renovated in 1971 and again in 2000 and remains one of the College’s architectural treasures.

Despite student protests, the Board of Trustees voted not to establish an autonomous Black Studies Center at Pomona College. However, at the suggestion of Trustee H. Russell Smith, a Human Resources Institute was established in the Claremont University Center. It included a Black Studies Center, a Mexican-American Studies Center (changed to Center for Chicano Studies in 1972), and a Center of Urban Studies.

Pomona’s class of 1973, selected from the largest number of applicants in Pomona’s history, had 169 men and 162 women—far more women than the Admissions Office had expected (housing arrangements had been made for 142 women). And, as a result of the administration’s commitment to increasing the number of minority students, the class had 31 Black students, compared to six the year before, and 19 Latino students.

Hal Glicksman and the Gallery

The College hired Hal Glicksman as art gallery director and curator at the start of what is remembered as a particularly high-energy and creative time for the arts at Pomona. Though his tenure lasted less than a year, Glicksman would devise a unique series of unique exhibitions called the Artist’s Gallery, under which the gallery would serve as a studio for the residency of a series of conceptual artists—including Michael Asher, Lewis Baltz, Michael Brewster ’68, Judy Chicago, Ron Cooper, Tom Eatherton, Lloyd Hamrol and Robert Irwin—who used the space to create ground-breaking works.

In March 1969, following an 8:30 a.m. rally called by the Black Student Union, student strikers disrupted a number of classes on the Pomona campus in March. The rally had been announced in the dining halls as an alternative to attending classes. “Don’t bother to go to class," stated BSU President Danny Wilks. “This campus shall not function as normal until the issue (establishing a Black Studies Center) is settled.”

Later in the year, a “War Weekend,” sponsored by Faculty and Students Together (FAST) drew hundreds of college and high school students, as well as community members. Former SDS president and civil rights and anti-war activist Tom Hayden spoke to a crowd of about 300 people on Pomona’s football field on Saturday, and Phil Ochs performed some of his more popular protest songs in the Wash on Sunday. FAST was organized in May to show “unqualified support” of a Black Studies Center and proposals by Latino students.

As part of National Moratorium Day in October, a day of nationwide protests against the Vietnam War, a crowd of several hundred students, faculty and Claremont citizens came together for a series of teach-ins and a candlelight march through Claremont that was attended by about 2,000 people.” Walter Cronkite called the national protest movement “historic in its scope. Never before had so many demonstrated their hope for peace.”

Mudd-Blaisdell Hall voted for 24-hour open house rules, with a clause prohibiting overnight visitation. The vote was conducted separately for men and women, with both giving 80 percent approval. The residents also voted to abolish specific quiet hours, but residents were expected to show reasonable consideration for other students at all times.

The 1969 Metate (the College yearbook) was released in magazine format, in several installments over the course of the calendar year, with the first in April, the second in June and the third in December. The three issues then became part of a boxed set.

End of the Campaign

The largest fundraising campaign to that point in the College’s history was concluded with the announcement by outgoing President E. Wilson Lyon that gifts and pledges totaling more than $21 million had been received toward the campaign goal of $19,641,000.

Only 25 members of the senior class attended a meeting to elect the student commencement speaker. The group was so divided, they asked for permission for two speakers to represent the class. Robert Berke and James E. Rosenberg spoke for the Class of 1969, each denouncing contemporary American society and the actions of government—Berke in prose, Rosenberg in verse. President Lyon gave the valedictory address, “The College of the Future,” noting that: “Higher education rests on a belief in reason, an exchange of ideas with mutual respect and faith in the fundamental processes of American government and society. When these give way to confrontations and violence, true learning is the first casualty.”

The Brotherhood of the Bell

Glenn Ford played a college professor in The Brotherhood of the Bell, a film that was shot partly at Pomona College, costarring Rosemary Forsyth.

Already a star at the age of 24, acclaimed Israeli-born violinist Itzhak Perlman performed at Big Bridges in November.

A long-time goal of The Claremont Colleges was realized in September when the Huntley Bookstore opened its doors at Dartmouth Avenue and Eighth Street. The building was named for Mr. and Mrs. Earl J. and Huntley, who made a large gift toward its construction.

About 50 anti-ROTC demonstrators met at the “Residential Community (dubbed “Moratorium City by a professor) on the Mudd Quadrangle, then marched to the ROTC headquarters at CMC’s Bauer Center, carrying signs that read “All Power to the People” and “Tricky Dick Makes Me Sick.”  The protestors were given 10 minutes to leave or face judicial action. They stayed in the building the next day until 3 p.m. A number of students were accused of violating the College’s policy on obstructive demonstrations, including nine Pomona students who were found guilty and given a sentence of suspended expulsion.

Chris Burden ’69 rose to fame as a controversial performance artist in the early 1970s with a series of dangerous pieces that tested the limits of his endurance. For the 1971 performance of Shoot, he was shot in the arm by his assistant. Other pieces found him nailed to a Volkswagen Beetle in a crucifixion pose, shooting at a jet passing overhead and crawling through glass. He is also known for mechanical, engineered sculptures including What My Dad Gave Me, a 65-foot-tall Erector Set sculpture installed at the Rockefeller Center in New York, and Metropolis II, a kinetic sculpture "modeled after a fast paced, frenetic modern city," installed at the Los Angeles County Museum of Art.