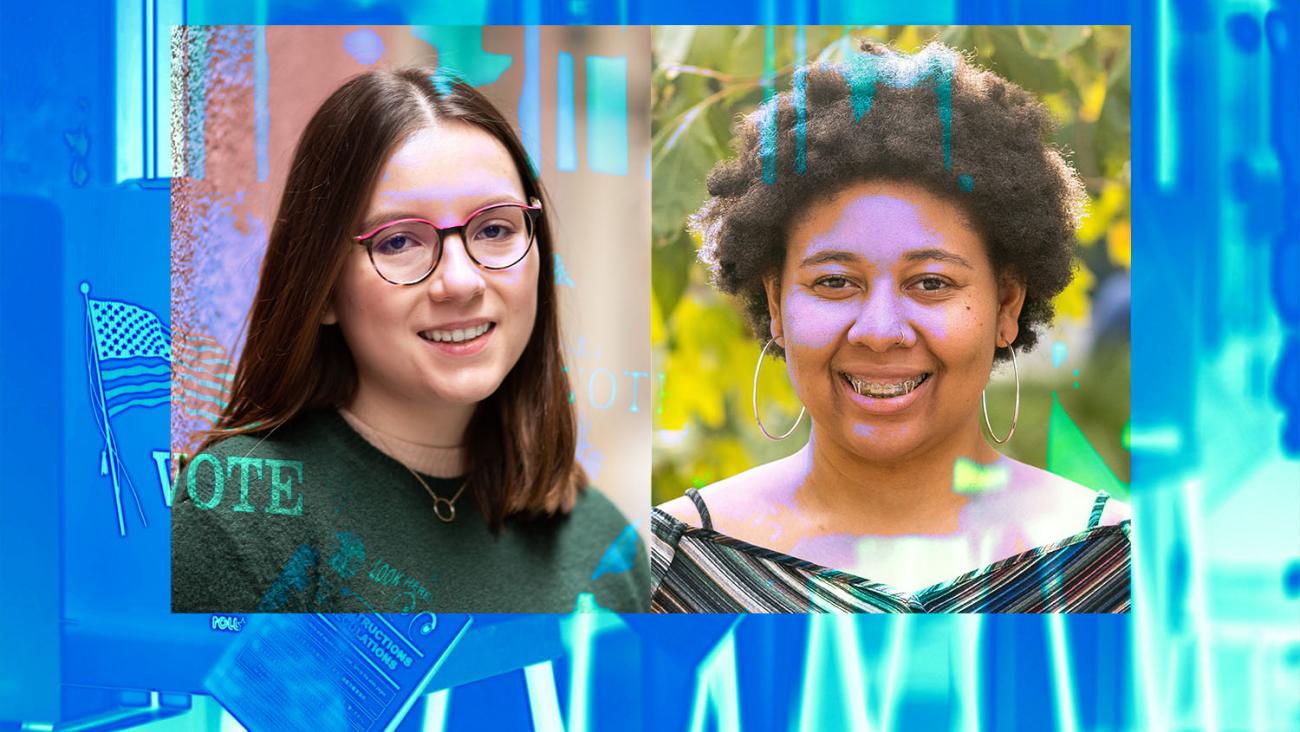 Getting out the campus vote isn’t what it used to be.

But even with students far-flung, Michaela Shelton ’21 and Naomi Tilles ’22 are leading a Pomona College voter registration and turnout effort that is an outgrowth of the 2018 student work that nearly tripled Pomona student turnout from the previous mid-term election.

This year’s kickoff event, a Zoom session for National Voter Registration Day on Sept. 22 with Pomona students and Dean of Campus Life Josh Eisenberg, was the first in a 2020 effort that will also focus on person-to-person voter outreach.

“We're hoping to tap into the momentum of this election,” says Shelton, who like Tilles will be casting her first presidential vote. “A lot of us weren't able to participate in the 2016 election and so we have a whole cohort of students that are now eligible to vote. We really want to draw on that new wave of young activism and engage people and let them know that their vote counts.”

Partnering with TurboVote, an online tool that provides a dedicated link for Pomona College students to get help with registration, absentee or vote-by-mail ballots and election reminders, Shelton and Tilles and their organization, PomonaVotes, are aiming for a Sagehen turnout that shatters the 50.4% of eligible voters who cast a ballot in 2018. That performance earned national recognition from the “All In” Campus Democracy Challenge.

“An optimistic—but we think achievable—goal is we would like to see about 75% of students who are eligible follow through and vote this year,” says Tilles, who considers the 50% turnout “actually remarkably low considering how politically engaged our campus is and how strongly students hold political opinions.”

The challenges of the 2020 election are considerable, since many students are living somewhere other than where they were registered before the pandemic.

“We've generally found that students chose to register to vote at their homes if they are from out-of-state, or if they're in-state, wherever they're from in California,” Tilles says. “That's partly because a lot of students may be coming from swing states or swing districts where they feel that their vote might have more impact compared to living in Claremont.”

“I have talked to a couple of students this year who are actually living in places that are not their home or close to campus. So I've talked to people who are changing their voter registration to vote where they are currently living but haven't voted before.”

It’s not unheard of for students who are eligible U.S. voters to be abroad right now—Tilles, for one. Born in Seattle, she went to high school in Ireland and is currently living with her parents in Barcelona.

“I’ve actually learned a lot about this because I've been helping some Pomona students who are abroad with the process,” she says.

To vote from abroad, eligible U.S. citizens must submit a form called the Federal Post Card Application to their local election officials. After confirming voter eligibility, those officials send a blank absentee ballot either electronically or by mail. Voters then return the ballot by a method allowed by their state. But with the uncertain timetables of international mail—and now the U.S. Postal Service—if a voter hasn’t received their ballot by 30 days before an election, they can use a backup ballot called the Federal Write-In Absentee Ballot.

To say the least, it’s complicated.

The Power of Person-to-Person

In planning their GOTV (Get Out The Vote) strategy, Shelton and Tilles decided their focus would be on direct student-to-student canvassing in addition to such things as Zoom events.

“We’re still going to continue to do things like Facebook Messenger and SMS outreach as opposed to just mass emails, because I eventually feel like people get tired of opening so many emails, being on Zoom for a whole semester. There's going to be burnout,” Shelton says. “So we're thinking of creative ways we can engage our volunteers and just fun events that can engage the whole student population.”

They’re planning a PomonaVotes event around the presidential debates, and are already connecting with Student Affairs, Athletics and partnering with professors from the Politics Department including David Menefee-Libey and Susan McWilliams Barndt. Ultimately, Shelton and Tilles believe, personal connections have the greatest impact.

Students involved in the PomonaVotes group can sign up and commit to reaching out to 30 to 50 of their friends and classmates, following up though the steps of registering, receiving a ballot or knowing where their polling place is, and finally, reminding them to vote. For those who feel they can’t commit that much time, Shelton has another idea.

“I'm currently interning at this nonprofit research and training organization called Votetripling.org, and they have a great voter turnout tactic where they simply rely on relational organizing like we are. For people who are already registered to vote, we ask them, ‘Can you remind three friends/family members to register to vote?’ And if they say yes, we collect the names, and we can send them a reminder later, like, ‘Can you remind these three friends to either vote in person of drop off their ballots in the mailbox?’ We want to triple the impact in our Sagehen community.”

For the first time, with many students living at home, PomonaVotes is also asking that they reach out to family members to influence them to vote.

Rallying voter turnout has strong roots in the wider Pomona community. Debra Cleaver ’99 is the founder and CEO of VoteAmerica, a nonprofit effort to register and turn out the millions of  Americans who are traditionally excluded by partisan outreach efforts. Cleaver earlier founded Vote.org, ElectionDay.org, Long Distance Voter and Swing the State. A pioneer in using technology to boost voter engagement and turnout, Cleaver will speak in a Zoom session with Pomona politics students and others on Friday, Sept. 25, at 4 p.m. (Register to receive the link.)

Shelton and Tilles, both politics majors, emphasize that their efforts toward registration are nonpartisan.

“We're used to having conversations and debates in classrooms,  and so I think the politics major really exposes us to different spectrums of political ideologies,” says Shelton, who allows that “when I was first getting involved in this work, it was kind of hard to walk the nonpartisan line.”

“We have our political opinions as a lot of students do, but we think it's really important to remain nonpartisan so that we can be as accessible as possible to students who might have different political views, and we want everyone to use these resources.”

Onetta Brooks '74, past president of the Alumni Association Board
END_OF_DOCUMENT_TOKEN_TO_BE_REPLACED
© 2020 Pomona College