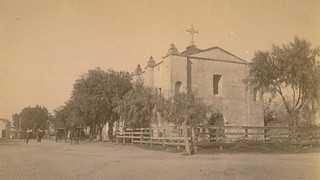 The first people arrived in what is now Claremont out of the Great Basin area of southern Oregon and Nevada around 1500 BCE. The area that is now California contained around one million people, who had an incredible diversity of linguistic families and autonomous tribal communities. In the Los Angeles Basin, there lived around 5,000 descendants of the Takic peoples; they were part of the larger Ute-Aztecan linguistic family, including the Aztecs of Mexico; the Hopi, Papago and Pima of Arizona; and the Ute of Colorado and Utah and had widespread trading networks. Takic-speaking groups such as the Tongva and the Serrano were organized into hundreds of villages referred to collectively as Tovangar – the world of the Tongva. They subsisted as hunters and plant gatherers, travelling seasonally between the basin and the mountains. Mt. Baldy was called Joat – Snowy Mountain – and Claremont was called Torojoatngna, “the place below Joat”. The best-documented material evidence of their presence in the Claremont area was found next to Indian Hill, a mesa located near what is now the Rancho Santa Ana Botanic Gardens that they continued to frequent up to late 19th-century.

Between 1540 and 1815, Spanish ships travelled up and down the coast of California as part of the Manila Acapulco trade route. At first, rumors of newcomers on the coast and on the other side of the Colorado River barely reached the Tongva. With the establishment of the San Gabriel Mission in 1771, however, the Spanish, and later the Americans and other foreigners, became an irreversible part of the inland Tovangar. The lands claimed by the mission stretched from the San Bernardino Mountains to San Pedro Bay. Torojoatngna/Claremont was part of this vast tract. The Spanish forced the Tongva (Gabrielino) and Serrano from their lands in the early 1800s. The Tongva and other indigenous people staged many revolts against the Spanish. At San Gabriel alone, there were unsuccessful revolts in 1779, 1785, and 1812. The Tongva people suffered greatly from disease, sexual violence, enslavement, murder, cultural erasure and other crimes committed against them by the colonizers.

In 1821, Mexico gained its independence from Spain, and Alta California became a province. In 1834, the missions were secularized by the Mexican government, and most of the land within the present city limits of Claremont became part of the Rancho San Jose, owned by Ricardo Vejar and Don Ygnacio Palomares. That same year, many indigenous peoples were forcibly relocated to the missions, and lacking immunity to Eurasian diseases suffered from a series of devastating smallpox outbreaks. The survivors were enslaved or forced by economic restrictions to work for the ranchers.

After the Mexican-American War of 1846-48, the United States took possession of California. At this time, there were about 100,000 Indians left in California. The 1849 California Gold Rush brought a flood of new immigrants into the territory, which became the 31st state in 1850. This new influx brought new smallpox epidemics, which continued to ravage the local Native American population. Disease, alongside other forms of violence inflicted on Indians reduced their already decimated population by half. The survivors were considered “trespassers on the land.” They had to obtain a passport from the government to visit settlements or towns. They were not allowed to have guns and were forced off the land; unable to provide themselves with food, many turned to stealing food or killing livestock. When they were brought into court, Native Americans were not allowed to testify against whites, so they had no legal recourse for wrongs committed by settlers. In 1875 the United States established a reservation for the surviving Serrano; the Tongva, whose descendants continue to live in Claremont and beyond, remain unrecognized and landless as a tribal group. Despite these unimaginable hardships, there has been a cultural renaissance, and Tongva festivals, songs, dances, story telling events, basket weaving,and spiritual retreats have resurfaced. Tongva continue to live in the L.A. Basin and beyond.